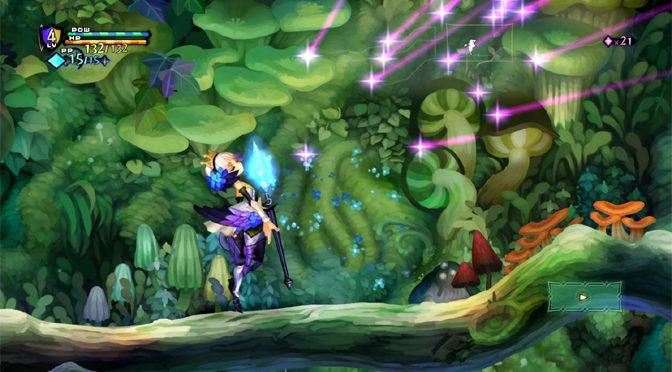 Technology changes in the blink of an eye. A few months can see the difference between what people see as ordinary and mundane to a new gadget they couldn’t imagine living without. New, constantly improving technology shifts so quickly that the changes almost become imperceptible. Given the rate of change, nine years is an eternity in the tech world, and video games are no exception. So to remake a critically acclaimed game from nearly a decade ago not only takes a crafty team of developers, but one with the guile to make a game from two generations past fit into today’s gaming landscape.

With the release of Odin Sphere: Leifthrasir, Vanillaware has proved their craft and guile, delivering a game that takes the brilliance of the original while improving upon in by leaps and bounds. A loose retelling of Norse mythology, Odin Sphere: Leifthrasir features jaw-dropping artwork, frenetic combat and a story that draws players in and won’t let go.

The game starts out with players controlling Gwendolyn, one of Odin Sphere’s five playable characters. Each protagonist’s story plays out in book that contributes a piece to the story as a whole. After a few brief scenes, players take to the two-dimensional, circular levels that connect to one another at various points, forming a large map for each area.

Frenetic yet fluid combat makes up most of the gameplay, with each character offering a unique style of play and a different skill set. Killing an enemy generates phozons, a floating essence that’s used to do everything from power up skills to grow food – a critical component of Odin Sphere, but more on that later.

[amazon asin=B0186D1U74&text=Find some new magic with a copy of the remade classic Odin Sphere: Leifthrasir from Amazon]

At its most basic, the game requires a simple mashing of the square button to dispatch weaker enemies, but it’s not long before stronger, more resilient foes leap in with hard-hitting attacks that can wreck a character’s health bar in a few, devastating shots. As more enemies fall and your phozon count increases, you’ll unlock skills and be able to strengthen each character’s weapon, known as a psypher.

Skills can either use phozons or a quickly replenishing bar known as POW, and it won’t take long for players to find which abilities suit their play styles. New abilities unlock once they’re found throughout each stage, and although there’s no way to refund upgrade points, Odin Sphere automatically places one point into every opened skill, allowing players to try out all of them without any type of penalty being applied to them.

As new skills unlock, they require an increasingly large number of phozons to execute, and this is where that bit about food comes in. In a typical RPG, defeating enemies nets experience, which is true in Odin Sphere. That experience, however, is minimal in comparison to what eating food grants. From the basic mulberry, which grants a tiny experience boost, to lamb chops, which grant huge experience boosts, players will find themselves forcing each character to gorge on meals at every turn. Each piece of food also provides a permanent health increase, which adds up over time.

Later, the game opens up Maury’s Touring Restaurant, a traveling diner that appears by a magical, rabbit-like creature known as a pooka, who also happens to be a chef. (Don’t ask. Just embrace it.) By finding recipes as you travel around, Maury can create elaborate dishes that combine multiple ingredients, yielding massive experience and health upgrades.

Combining food ingredients isn’t the only way to enhance items in Odin Sphere, which features a relatively simple but crucial alchemy system. Tiny plants known as mandragoras, which act more like animals, make up most crafting ingredients, with each corresponding to a series of potions. Those potions can do everything from replenishing health to creating a massive whirlwind that severely damages even the toughest bosses.

Odin Sphere’s simple depth may keep players coming back, but it’s blatantly obvious from the first moment that the real star of the game is its incredible beauty. It’s said that you shouldn’t judge a book – or in this case a game – by its cover, but that notion can go out the window this time. Odin Sphere’s gorgeous box art teases the stunning visuals rife throughout the world of Erion.

From celestial backgrounds of a swirling stars in the night sky to shadowy, verdant forests, every frame of artwork is bursting with vivacious beauty. Colors explode off the screen in a near overwhelming display that almost dares you to stop what you’re doing and simply gaze admiringly.

Odin Sphere doesn’t stop with its immaculate visuals, though. A hypnotic, haunting soundtrack fosters a truly epic feel to the game, and superb voice acting and sound effects bring every moment to life. The game ‘s story is told through a series of storybooks, and it genuinely feels like every moment is something out of a grand fairytale.

With multiple game modes, including a new game plus, Odin Sphere begs for a second playthrough. And kicking the game up to the hard difficulty will instantly give players an added challenge, further enhancing its value.

It’s impossible to emphasize how well Odin Sphere: Leifthrasir stands as an accomplishment in gaming. To call it a remake of a great game wouldn’t do it justice. In every way, it stands as a masterpiece on its own.