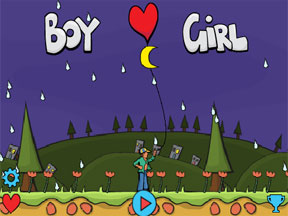 Boy Loves Girl is a cute little side-scrolling adventure game. It’s the story of a faceless boy seeking to impress a faceless girl with just the right gift. I’ve got to say here, that faceless boy would have gotten my attention way earlier than he got faceless girl’s. This boy is really willing to go the extra mile for some very exotic gifts.

The game’s graphics are stylized and charming. The lack of facial features on the main characters make them every-boy and every-girl. Sadly, the path of true love is never easy, but the boy is undeterred. Alas, he must complete complex tasks to bring his gifts to the girl.

The girl, for her part, mostly just runs away, forcing boy to chase after her with his moon-shaped kite. Unfortunately, he has to get pass nasty clouds that try to strike his kite with lightening or hang it up on their cloudy bulk. (I know clouds don’t have bulk, but these mean clouds do.)

In later levels, the clouds smile and then explode. These are some serious clouds, way more complex than just your average nimbus.

While boy runs along with his kite, chasing after a zoo’s worth of exotic animals to catch for girl, he also has to collect smiles with his kite, and as the player you have to help him out by touching angry clouds and what-not before he reaches the girl.

It doesn’t sound difficult, but the developers chose swiping over dragging for the controls and that makes it harder maybe than it should be to get the hang of the controls.

The problem with swipe controls is that they are often sluggish, as is the case in Boy Loves Girl. I found myself wishing I could control the kite with my left thumb while tapping other items with my right thumb. That was playing it on the iPhone. I’m not sure how game play could have been improved playing it on the iPad, since my hands aren’t big enough for the drag to have worked for me, but the swiping was difficult to deal with, especially in higher levels.

Despite the sluggish swipe controls, the game is compelling and with over 50 levels, it’s a lot of game for the money. The stylized art and peppy music really make this app rise above other slide-scrollers in the App Store. It makes up in charm what it lacks in game control.

All told, Boy Loves Girl, is a good effort by Grubby Hands. It’s exactly the kind of game I like to have on my phone. Levels are short, so you can play for a few minutes or a few hours. Since, I’m more likely to have a few minutes to play on my iphone, I appreciate the way the levels are structured.

Boy Loves Girl is well worth your 99 cents. Go forth and purchase and fall in love all over again.