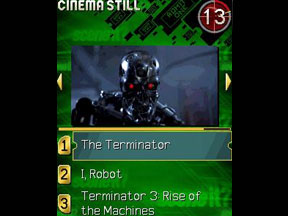 The different versions of Scene It the board game, have been flying off store shelves for a while now. In fact, last Christmas I saw a guy walking out of a store with so many copies that his head was completely hidden and his girlfriend/wife was guiding him out the door. So, I was curious how such a popular game would make the transition from board game to cell phone game.

When you start the (cell phone) game your phone connects to a virtual game lobby where community high scores are displayed. From the lobby you can either log in with your account (which you have to set up) or as a guest.

And then you are given the option to turn the sound on, play with only sound for the video clips, or completely turn the sound off. The best option is video sound only; I found the game sound/music to be annoying after the first few times and you cannot complete many of the video clips without sound, there being no subtitles.

There are three game options. Single player goes thru 4 rounds of 4 questions each. I was never able to get nonstop play to work with my review copy. The last mode of play is group play where you and up to three other friends can pass the phone around, each completing one of four, four question rounds before passing the phone to the next player.

When the game first starts, the phone connects with a server and downloads most of the questions. The things that are downloaded as you play are the movie clips, but more on that in a second. The types of questions are similar to the board game and include:

Alternates – Where you identify the movie from the alternate title

Cinema still – Where an image from a famous movie is displayed and you have to identify the movie.

Decoder – Where you decode the movie title from an anagram

Movie Clip – Where you watch a clip from a movie and then answer a question about the clip. These questions take about 30 to 60 questions to load as they are downloaded on the spot.

Working Title – Where you are given the temporary or working name of a movie and asked to respond with the actual name of the movie.

After the category of question is displayed, you have 15 seconds to select one of three multiple choice answers. There is no board to move around, so instead each player scores points for correct answers as well as a bonus for getting multiple questions correct in a row. If you get all four in the same group together correct you get a bonus, and if you get all 16 questions correct you get an additional bonus.

After each question you are shown production notes about the actor or movie. These are neat, and worth the read, but unfortunately, these get repetitive after a while as the same notes come up again and again (and again). For example, there are a lot of questions about the movie Terminator, but the same production notes come up every time the question relates to the Terminator movie.

The best thing about this game is the movie clips. They may take a bit longer than other questions to load, but you are literally downloading a clip from a movie onto your cell phone and watching it. And the video quality is very good. Now this does require that you are in an area with good coverage, and not for example on a Washington DC Metro system train traveling underground without a signal.

Not that you will need it, but Scene It? Movie Edition has a good help section with a good explanation of the rules, scoring, controls, game options, and some tips on improving your score. I did not look at the help section right away, so I missed out on learning that you could also answer by pressing 1, 2, or 3. Until that point I had been using the up and down arrows.

Currently the only version is available is the Movie Edition on the Sprint Network and costs $2.99 for a monthly subscription. I conducted this review on a Sanyo MM-9000, which I found to be comparable both in video quality and ease of use to many other phones on the market right now.

Overall I was very impressed with Scene It? Movie Edition by Namco. The game is fun to play, though possibly a little bit too easy for true movie fans. The graphics are excellent, and the whole concept of being able to download movie clips for a game is really cool and I cannot wait to see what other games start taking advantage of this. Overall my only negative comments are 1) the requirement that you be in a good coverage area and 2) I don’t think this game has a lot of long term playability. Though considering that it is being offered on a monthly subscription, I don’t think that is what the developers were going for anyway.