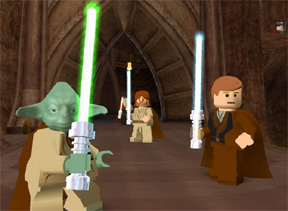 Let me first start off by saying that because of Lego Star Wars: The Video Game, I have bought a PlayStation 2. And I’m glad I did.

I have a six year old and he has many Star Wars Lego sets. This game looks so real it is as if the Lego guys got up and walked into my PlayStation and came to life. After seeing it for the first few seconds I thought "These graphics are so cool!"

But let me begin by saying that this game is mostly for kids. A serious gamer may not like the fact that you can finish it in an afternoon. But this game is just what I was hoping for when I played it with my son.

It begins with episodes 1, 2 and 3. There are none of the heroes (except Chewie and Ben) from Star Wars: A New Hope and beyond. Each episode contains certain characters which have special abilities. For instance, the jedis can do a double flip, use lightsabers and use the force. While characters like Padme can shoot a blaster and use grappling hooks.

If you are playing this game solo, you can only control one character at a time. The computer will be your companion (Obi-Wan) and help a little when you are under attack from battle droids or other enemies. A nice feature is you can change characters if you need to perform tasks jedis can’t. There are 30 different playable characters and some have the same abilities while others are unique and are needed to get through some of the puzzle-solving levels.

For example, C3PO is the only character that can open certain doors. And that seems to be all he is good for! He can’t jump or shoot. I guess you can say he makes a good target, which pretty much puts him on par with his character from the movie.

The music and sound effects play a big part in the game. They are all done so welllightsabers, blasters, and the force sound great. So is the one that makes my son crack up – R2-D2 screaming when he falls or gets hurt. The music is cheery when things are going well and gets intense when you face a boss like in the Darth Maul Duel.

Lego Star Wars: The Video Game can also have two players working together to fight the Sith. The second guy can join in at anytime and also dropout whenever they want, which we found to be helpful when playing the difficult podracing parts.

Another wild stage of this game is the Jedi Arena. There are so many characters to fight that it is easy to lose your character in the crowd and you may find yourself attacking the second player instead of the battle droids! Even though you may occasionally beat up player two, the game is much more fun with another jedi at your side.

As I mentioned earlier, this really is a game for kids. But what will attract adults is that everything in it is created with Legos. When you kill another character like a battle droid, you scatter little lego blocks all over the place, just like you loved to do when playing with the actual blocks years ago. Plus there are some really well done animated screens between the stages, We found them to be very creative and comical.

My son and I have really been into video games in the last year in a half and this one has to be one of the better games for kids ages 5-8. I questioned my son about what he liked and didn’t like about the game to get his unique perspective on this title.

1- You can change characters

2- You don’t have to start over from the beginning when you die.

3- Can purchase other characters

1-Yoda walked too slow and if he wasn’t walking he flips around to move.

Nathan: Nope. I love this game..can we play now?

So there you have it. If your kids are into Star Wars this game will provide hours of entertainment with out the frustration of trying to get through stages. And once they go to bed, the adults can have fun with the game as well.