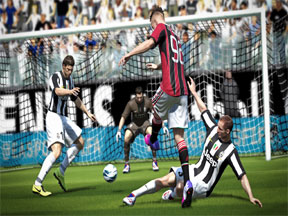 It seems that every year a new FIFA game comes out, reviewers all say, "There’s no way EA can make FIFA any better." Sooner or later, the game’s going to hit a plateau or, possibly worse, fall into the same cycle Madden did and become a rehashing of the same game year after year.

The thing is, FIFA hasn’t succumbed to either of those two pitfalls, and it seems EA Canada won’t be satisfied until the plateau it hits is pure perfection. Once again, amazing as it is, FIFA 14 delivers an improved experience that’s quickly pushing the series to that elusive perfect score.

What makes FIFA 14’s improvements so profound aren’t the revolutionary changes EA’s made, but the little ones. Longtime fans of the series will quickly notice subtle but much-welcomed tweaks to ball control, shooting and, most importantly, teammate AI, which has been the series’ only real stumbling block in recent memory.

To start with, maintaining ball possession is significantly easier thanks to the Left Trigger/L2 button now acting as a precision-control dribbling mode. Holding the button while on the ball causes your player to use his body to stave off defensive pressure. At the same time, it also enhances control while moving, giving you extra time to assess your opponents defense and pick the right pass.

Skill moves have also been improved, and there’s no need to hold a separate button down in conjunction with the right stick to pull them off. This creates a much more fluid experience, making the game feel more natural and responsive.

EA Canada didn’t limit their improvements to just ball control, though. More so than past iterations of FIFA, this year’s version gives players a true sense of dominance in good attacking positions. One-on-one finishing feels like it should, with the attacking player in almost complete control. There’s also a clear-cut advantage to creating a half-yard of space and letting a shot go.

Working in tandem with the more realistic offense, your team’s AI constantly does what it can to create openings and give you as many options as possible. While you can still manually tell your computer-controlled players to make a run into open space off the ball, more often than not, I found that the player I wanted to move was already doing so.

But the excellent AI doesn’t unfairly tilt the game toward the attack side because it also improves defense. In fact, for the first time playing a game in the FIFA series, I actually found myself employing true defensive strategy. FIFA’s attacking game was always a strategic marvel, with highly detailed tactics a joy to develop and execute. The defensive aspect, however, always seemed to be missing that same level of depth.

Now, maintaining your team’s shape is as important as being able to quickly tackle the ball away from a man in possession. What player you’re controlling is critical too, with attacking players less likely to make a successful challenge than a defensive-minded player.

Just like real life, there’s a separate metagame that goes on defensively. Timing, positioning and knowing when to pressure and when to back off all combine to make defending as enjoyable as attacking. And because of that, there’s an even greater sense of reward when you do finally score a goal. You didn’t just score; you stopped the other team from scoring and then you went and bagged one yourself.

The gameplay improvements are made even better with the gorgeous graphics FIFA 14 puts on display. Character animations provide a natural, true-to-life aesthetic that bring the game to life. Character models are outstanding, and the overall atmosphere in the stadiums makes the experience feel as authentic as watching a Premier League match. The fans in the crowd still don’t look as good as they could, but the focus usually remains on the pitch.

The sound complements the visuals nicely, with commentary as vibrant as ever. Ambient noise from packed stadiums further enhances the experience, and it’s clear that EA Canada put didn’t skimp on the details. For instance, when the away team has a long spell of possession, the crowd begins to boo. At the same time, if the home team is able to steal back the ball, those boos turn into a raucous roar.

With gameplay modes galore, including the now famous Ultimate Team, FIFA 14 gives soccer fans a ton of content and endless replay value. No two matches feel the same because, as it is in real life, no two matches are the same.

It seems the only thing that can stop FIFA’s meteoric ascension to a perfect level is a trade embargo against Canada. But short of Congress cutting us off from our neighbors to the north, it looks like FIFA’s going to be top of the table for years to come.

FIFA 14 gets 4.5 GiN Gems out of 5 for another great year of the beautiful game.