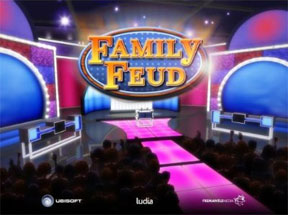 It’s always been my advice to step cautiously toward games that try to faithfully represent television quiz shows and popular board games.

The idea is that most developers and publishers are trying to make quick cash off an already popularized title.

These game makers usually do a substandard job, but every once in a while, some companies dash away such preconceptions and deliver a good gaming experience despite the negative climate that surrounds a certain genre.

It seems that Ubisoft can be counted among the number that cares about the games they release, because with Family Feud 2010 Edition, I found myself completely enjoying the experience provided.

First off, Family Feud 2010 Edition is a party game, and as such should only be played with a group of people to get the full effect.

Besides, there’s something depressing about the thought of playing this particular game all by your lonesome.

If you’ve never seen an episode of this long-running game show-and shame on you if you haven’t-then the concept is simple to explain. The show has asked a particular question to a random group (the survey that always says) of 100 people. It is the contestant’s job to guess which answers made it to the top slots of the game’s scoreboard.

And, in a nutshell, that’s it! Pretty hard to mess that up, I’d say, but Ubisoft goes a bit further to make a game out of this title by tossing in some customization options and unlockable content to use during character creation.

For the most part, however, FF2010 is exactly what you’d hope for in such a game. The answers provided for the game are as logical and illogical as they are in the game, and the autofill option given during gameplay makes the game utterly enjoyable without the hassle of using your Wii remote to type out every single letter of the word you’re trying to spell.

So, good job, Family Feud. Way to go above and beyond our expectations and not treat a peripheral title like it wasn’t worth the effort of fine-tuning.

The game is out for the PC and the DS, though we reviewed it on the Nintendo Wii. On the Wii, it makes an exceptionally good title because that console is pretty much the default choice for group type games, and Family Feud is all about the family after all. Putting two groups of people on opposite sides of the TV and making them work together like a (probably dysfunctional) family is great fun and is sure to liven up any gathering. Our guess: it will be the hit and centerpiece of almost any party.