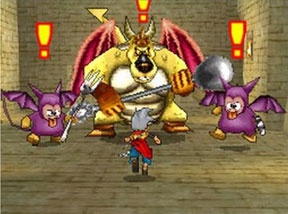 At first glance I wasn’t sure if this was going to be a kids’ game that would bore me, or if it was going to be an over-exaggerated attempt at porting a Saturday-morning-cartoon-esque game to the DS. I was actually surprised.

The game started out with a bit of difficulty in the controls.

You have to use the D-pad to move around in this third-person title. The D-pad was a little difficult at first because I felt a little lag in turning and moving forward. It felt like I couldn’t quite get around.

However, using the R and L buttons to look around is a convenient feature especially when searching the grounds for nearby monsters to either fight or scout.

But these slight aggravations are worth getting over for the rest of the game.

The first island you come to is riddled with slime monsters. They start off at about 1 -3 XP per kill. It may not seem like much, but since you start out with one monster to fight with it does add up at a decent pace.

What is also a cool feature about winning battles is that when you collect gold you can go to the main building on the island and go to an ATM machine where you can set aside some gold for future needs. I found that small convenience to really help when I needed to buy a healing item later on.

I really enjoyed the simple features of the game. It was fun naming my monsters, collecting gold, challenging and scouting monsters over and over again, and roaming around the islands to see what else I could get.

This game is a very fun game to sit down, kick back, and enjoy, despite how clichÃƒÂ© that may sound.

It has a very colorful landscape and design as well as a lot of humor with the different monsters. As a turn style RPG Dragon Quest Monsters: Joker is a lot of fun and it takes a good amount of time to play to get where you want your character to go. It’s a good time and I would recommend it for a game that you would want to keep for a while.

This may not be a game making any Game of the Year lists, but given its low price (on sale if you follow the Amazon link above for under $20) you are actually getting a lot of bang for your buck. Besides pushing the graphical limits of the somewhat limited DS platform, the game should keep you entertained for hours on end as you customize your fleet of monsters and power them up. We enjoyed the game for over 20 hours, which is about $1 per hour, and a great deal.

Dragon Quest Monsters: Joker proves that it is no joke by earning 4 1/2 GiN Gems, which is not bad for a little RPG exclusively released for the Nintendo DS.