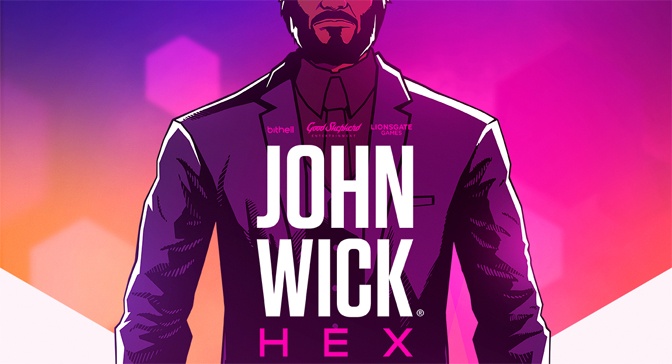 The John Wick series of films is reasonably popular, and for good reason: A strong lead actor, a premise that everyone can agree upon (for the first movie; who kills a dog?!), and great choreography mesh together to tell the tale of a man who is essentially an angry typhoon: John Wick. Two associates of Wick are kidnapped by a man named Hex, and the titular protagonist takes up a dangerous contract from the High Table to find Hex and do what Wick does best: Kill. 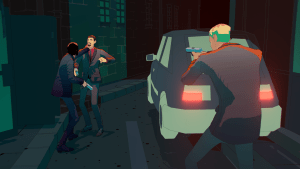 The story of John Wick Hex takes place before the first movie- before Wick ever encountered Helen, who would later become his wife. The tale of John Wick Hex is of a fully focused Wick, steeped deep into the underground world of assassinations and rampant murders of nameless schmucks. The story of Hex is a fun little expansion of the universe’s lore, but nothing mind-blowing or overtly exciting, as it largely is what you would have come to expect from a story featuring a character who is effectively a walking natural disaster for his enemies.

You would think that a series of action movies would spawn a third person shooter or something in similar vein, but that wasn’t the case with this title. John Wick Hex is, instead, a top-down tactical game with a pause mechanic: You select spaces on the field within your movement range in order to make your way through cramped alleys, restaurants, clubs, and harbors. You essentially zig-zag your way through areas using the game’s hex grid (haha because Hex, get it) until an enemy comes into your line of sight, in which case time stops so you can issue commands.

Firing a gun consumes ammo, dodge rolling, performing a takedown, even throwing your gun will cost you focus. Your focus can be regenerated by selecting the Refocus command which causes Wick to take some time to compose himself, which might make you think: Which is the most important resource? Ammunition? Health? Focus? The answer is none of these- it’s time. Every single action Wick performs costs time, and while you’re performing one action, all enemies around the map are moving and grooving their way to you so they can take you down. 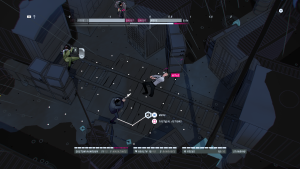 All actions carried out by you or the many enemies littering the stages are performed simultaneously. This means that while time pauses when you consider an action to take against an enemy you may have just stumbled upon, your action of shooting one guy ahead of you could mean that others who were just outside your vision range acquired eyes on you and are readying their weapons to fire at you. This same holds true for stunning a target with a melee attack, performing a takedown, and more. One or two enemies mean nothing- this is John Wick, after all, a man known to have Excellent Adventures in phone booths, but getting swarmed by 5+ enemies can quickly leave you without much health, without any focus to perform dodges or attacks with, and low on ammunition. Speaking of which, your health, ammo, and more persist between levels, and after completing a chapter you can unlock different suits at your prep area for your next mission (such as unlocking the ability for your dodge roll to cost less focus, allowing you to more easily get through firefights with less damage taken), or drop additional bandages into the next stage in the event you get injured. 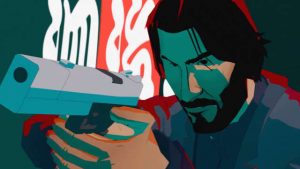 Everything in the game is shrouded in fog of war- you can only see what John Wick sees, after all. Outside of his vision range, all is blackness, though you can still see an arrow indicating where enemies are after you’ve retreated behind cover. Enemies that are visible, however, reveal all of their secrets to you: A timeline at the top of the screen will clearly show what actions an enemy will take, and how long it will take for them to perform that action, so if you see a foe has one full second before they can shoot you, you know well that you have enough time to double tap them and then move onto the next. The timeline is incredibly handy for taking the trial and error out of multiple enemies accosting you at once and will pretty much make or break your runs of the game during more difficult encounters, especially toward the end of the game (the end of the game throws so many adds at you that it’s like they’re all clones with the surname of Fett). 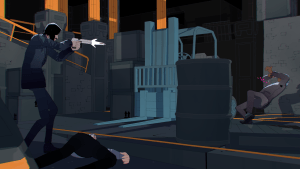 There’s a peculiar balance for everything in John Wick Hex: Mastering the mechanics of the game can make you feel like a powerful time lord who cuts through enemies like butter. At least until you reach tougher foes- some enemies will also have large amounts of focus of their own which makes them more difficult to shoot, and blunt force trauma is the most effective way to addle them for a few seconds so you can more effectively handle them. Bosses are especially big on this, as you may need to have a slap fest with a boss just so you can properly murder him in cold blood with your guns like God intended- it’s simply the morally right thing to do. It’s generally imperative that you refocus constantly and make sure your health is topped off, as bandaging can take upwards of 4 seconds to perform, which as mentioned earlier, enemies can still move and attack while you do such an action; you won’t often get the chance to heal in the middle of a boss fight. 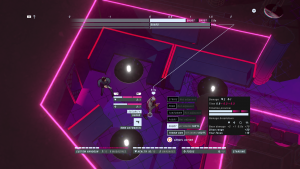 After beating a level, there’s also a replay where you can view all of the actions you took throughout the stage but with fancy camera angles thrown in for good measure. It’s a fine feature, but watching the stilted movement pattern of the in-game John Wick doesn’t elicit the same response as watching the fight choreography of the movies. I understand what the developer was trying to go for with this feature, but Wick zig-zagging his way through an alley, jerkily rolling behind cover, and erratically moving into position to perform a takedown on a foe… is a thing that is in the game. This feature was used once, laughed at, and then ignored for the rest of the playthrough. This was a cute addition, but it definitely needed more fluid animations for the playback. 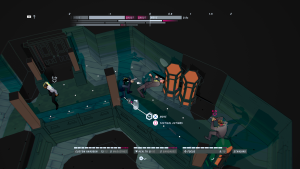 Each stage also has a rating you can get based on how well you performed, and doing well enough will earn you a title such as “Baba Yaga.” Beating different par scores per level give different names, which can add a bit of replayability to the game if collecting all of those would be your jam (which, Baba Yaga is acquired by getting all of the par scores in each category). The game is reasonably great, but ultimately very short, taking up maybe 6 or 7 hours of play time, but if you intended to acquire every single title and trophy it would likely take several more hours which is by no means awful for a $20 game. 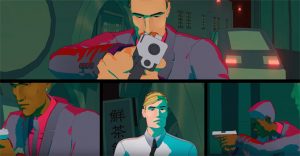 The graphics are cel-shaded and severely stylized; blood spatter pops off of character models in bright pink, as colors are utilized to great extent to give off a dystopic vibe in neon hues. The visual aesthetic of this game is probably what you would get if you organically merged real-time tactical gameplay requirements a la Myth or Nordic Warriors, with visuals like Far Cry: Blood Dragon. The sound design is great, with Troy Baker playing the role of Hex, and the soundtrack has a great spy vibe to it with liberal use of strings and percussion to complement the general theme of the John Wick films. 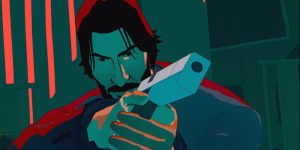 So, ultimately, is John Wick Hex fun? The game is reasonably challenging (with some moments that may feel like spikes in difficulty as you learn that enemies may continually respawn during some boss encounters), and makes you feel quite unstoppable as you zig-zag and roll your way through swaths of generic bad-guy combatants. The game is short enough that it doesn’t truly overstay its welcome but it can still be repetitive at times: There are only so many occasions where knocking out or shooting the same mook is entertaining, but generally speaking the differing obstacles, weapons, and challenges can make up for the low enemy variety. 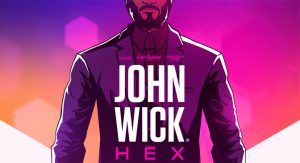 For those who want to play a solid tactical game where every choice you make in combat matters, John Wick Hex is a great little title at a decent price. For those expecting more of an action game like Splinter Cell from something with the Wick branding- stay far, far away from this game as it’s slow, methodical, and even plodding at times due to its tactical nature, and would be more enjoyed by those who enjoyed games like Myth, Shadow Tactics, or Nordic Warriors, instead.