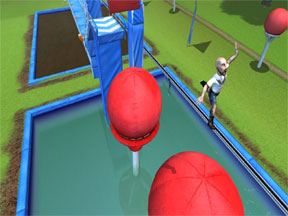 It makes since that the ABC network would want to turn their game show Wipeout into another video game installment. It seems to have everything a good party game would need: crazy obstacle courses just ripe for platforming, zany, colorful characters perfect for making fools of themselves, and a way for other players to make it harder for the person braving the obstacles. With all of this in place, Wipeout 2 certainly has the right formula. It has its fair share of laughs and the platforming is certainly not dull. However, it turns out it’s not all fun and games on these obstacle courses. In fact, Wipeout 2 suffers many of the same problems as the first game in the series.

Wipeout 2 does well on providing you the basics from the actual show. You not only get the ridiculous obstacle courses from the show, but you get the colorful announcers as well. They give you their thoughts before each run and repeat the same one liners whenever you mess up.
Aside from the repeating lines during the run, the announcers and commentary give this game exactly what it shoots for in presentation: the feel of the game show itself, from the corny commentary to the stereotyped contestants you can pick from, like the emo teenager, the toothless hillbilly, all the way to the crazy old lady.

Your goal is to make your way through Wipeout 2’s unforgiving obstacle courses with the best time under your belt. Falling off the platform costs you precious seconds and every obstacle on the course is meant to force that to happen.

The game takes place in the form of episodes, ten in all. There are five for summer obstacle courses and five for winter. Each episode changes the layout of the courses ever so slightly, I assume just to keep you on your toes and to keep monotony at bay as long as they can. The winter and summer courses are about the same aside from the abundance of snow in the winter episodes.

The slight changes between seasons and shows, however, make you pay attention to the small things if you want to make it to the finish line. A swinging bar meant to knock you off the platform in one episode may change to two or three in another, or disappear altogether to be replaced by a trampoline platforming segment. You always have to be on the lookout or you’ll end up in the mud (or icy water).

After you start the game up and begin your very first run-through, the first thing you may notice about Wipeout 2 is the exaggerated, cartoony look of the characters and environment. After a stifled chuckle or two, the second thing you will probably notice is that the gameplay and controls are right at home here. From highly exaggerated height and hang time from simple jumps, to the sheer brutal looking and sounding impact of being clocked by one of the obstacles, the gameplay seeks (and succeeds) at making Wipeout 2 something not be taken too seriously, which is definitely in the game’s best interest. If you were to even try to take the controls seriously, then you wouldn’t be able to play this game for more than a few minutes.

The controls are, at best, capable. They work for the absurdity of the courses. However, due to the unforgiving nature of the obstacles, the unresponsive controls will send you into the mud more times than not. Running off of the platforms or into the obstacles becomes a problem when the character you are controlling keeps running for a few moments after you have stopped pushing the analogue stick. Balancing on platforms is another difficulty, as moving the controller back and forth for balance doesn’t always go the way you planned. I would sometimes have to turn the controller past my arm’s limits and my character would still take a dive. When you fail, you never really feel like you were given a fair shake. However, once you get used to the controls, some good old fashioned hand eye coordination will get you through the courses.

The obstacle courses aren’t without enjoyment. Though the controls are less than ideal, you can still enjoy testing out your reflexes on the constantly moving courses. Trial and error will get you farther than raw skill in this game.

Some of the real fun, however, comes from having an extra person to play with. If a two player game is started, then the second player can throw more hurtles at the person running the course, like throwing snowballs to knock the person off the course or cause them to slip up. The ability to have a friend join in is possibly the only thing to keep the game from getting far too tedious. As a single player game, the obstacles show too little variety to keep someone interested for long.

The cartoony look certainly complements the exaggerated physics of the gameplay as well as the obstacles themselves. Each contestant’s disproportionate head and body make the spills and thrills all the more funny in the end. The sound effects work much in the same way. Exaggerated grunts and other painful noises will take a little of the edge off each time you fall victim to the less than perfect controls. The announcers and music, on the other hand, can get annoying at certain points, whether it’s the announcers making the same bad jokes over and over, or the lame rock ‘n roll rift playing in the background as you fail over and over.

There is definitely some fun to be had in Wipeout 2, but it is limited by the unresponsive controls and the lack of variety within the games center pieces, the obstacle courses, as well as a lack of content all together.

A second person can help stave off the tedium for a while, but eventually you will become tired of the formula. If you have a few friends over and need a game to get a few laughs out of while platforming, Wipeout 2 is definitely worth it. Otherwise, there are other games that you can give you what you are looking for in a better executed package.