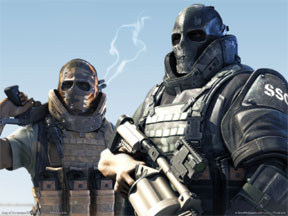 Since Gears of War was released for the Xbox 360 in November of 2006, what gamers think of as a good third-person shooter has been altered forever. Before Gears of War, a third-person shooter was simply a shooter with a view from behind of the main character. Gears of War changed that belief by incorporating one of the most detailed cover systems in a video game to date. Its co-op mode was also one of the best to ever grace a console. Regardless of the fact that Army of Two comes from a different development team, gamers will be thinking of Gears of War at many intervals of the game.

Army of Two starts off in 1994 with two Army Rangers, Elliot Salem and Tyson Rios, on an assassination mission in Somalia. Upon arriving in the country, they are ordered to meet up with a mercenary named Philip Clyde. After the mission, Salem, Rios, and their commander, Richard Dalton, decide to enter into private military operations. In other words, they become mercenaries, which is great for the player, because mercenaries don’t need to follow rules.

Players have the choice of choosing to play as either Rios or Salem. Other than appearance, there is no difference in gameplay. Rios is a man of morals, always wanting to do the right thing. Salem is a man who likes to make money, spend it all, and then go and make some more. While these elements are not crucial to the plot of the game, they do serve to add some personality to the characters and often provide for some amusing conversations.

While your choice of character doesn’t directly affect the gameplay, how you play does. Army of Two features similar gameplay to Gears of War in the use of its cover system, but differs in two important ways. The first is the aggro meter and the second is the weapons system. Aggro is essentially attention. If you are firing a bigger gun than your partner, you will get more aggro. If your partner is firing and you are behind cover, the aggro will go to your partner. This is important because as one player gains aggro, the other becomes virtually invisible, allowing stealth tactics to be used to deadly effect.

The second key difference from Gears of War is the weapons upgrade system. Players are able to outfit their guns with a variety of upgrades, ranging from an increase in clip size to a increase in barrel length. The problem with this system is the fact that some of the early guns, such as the AK-47, are so powerful when fully upgraded, that purchasing other guns seems pointless. Guns do affect aggro, though, so it is important to use them accordingly. For instance, make sure your partner has a bigger gun if you want to stay stealthy.

Going hand-in-hand with gun selection, the use of aggro is crucial to co-op tactics. For example, if one player is able to maintain full aggro for a period of time, the option to go into Overkill mode becomes available. While in Overkill, the player who has the aggro loses the ability to take cover, but gains several important bonuses. The first is the fact that time is significantly slowed, allowing the player to make more precise shots. A second perk is infinite ammunition. Finally, there is a significant increase in damage from the player with the aggro.

For the player who did not have the aggro, there are also some nice bonuses in Overkill mode. The first is a dramatic boost in speed. This makes taking down enemies much easier, as players will have no trouble closing the distance between themselves and enemies. In addition, players will become almost completely invisible, meaning that even if you are unable to get to an enemy quickly, chances are he won’t see you anyway. Overkill only lasts for 15 seconds though, so be quick about your business.

Overkill is only one of several co-op maneuvers that can be used in Army of Two. One of the most important pieces of gameplay is the ability to heal your partner when he is down and vice versa. When a player’s health bar goes down, his partner must get to him and heal him. One player cannot heal another however, if he is being shot at. So before a player can be healed, he must first be dragged to safety. Both players are still able to shoot while this is happening, making the process a bit easier. Don’t take all day, though, as a player who is in the downed state for too long will die resulting in mission failure. A mission is also failed if both players go down.

While the co-op tactics are essential to playing through the game successfully, there is a major problem that Army of Two suffers from: bad A.I. Bad A.I. is a problem in any game, but it especially hurts in a game like Army of Two, since the player is not only going up against it, but also relying on it for assistance. Issues such as failing to take cover and the inability to provide assistance when you are down significantly reduces the value of the single player mode. And while the problems are not huge, they are still there and annoyingly noticeable.

Fortunately for EA, they realized that most people would not want to play a game like this alone, and incorporated the feature to play with a friend through both local and online multiplayer. A great feature of the online multiplayer is that everything from the single player mode carries over. So if you played the first two missions and upgraded one or two of your guns, but your friend just got the game, you still get to use the guns you’ve already purchased.

Sadly, the good aspects of the multiplayer end there. The other multiplayer modes put you into a two-on-two match. This becomes a problem when playing with someone who doesn’t feel like working with you, a bigger problem that you might think. Since the game is built around two people working in tandem, if one guy runs off to be the glory hunter, you can kiss your chances of winning goodbye.

Beyond the gameplay, Army of Two really isn’t anything spectacular to look at. It’s above average visuals aren’t really anything that hasn’t been seen or done before. The guns all look very nice, but since the game takes an over-the-shoulder viewpoint, players will only see a portion of the gun at any given time.

The sounds of the game fall into the same boat as the graphics. They’re solid, but they don’t do anything to amaze you. The guns all sound like they should and the voice acting is decent. But some of the lines that the characters use are so repetitive that you may be tempted to shut the audio off.

In all, Army of Two is a solid third-person shooter. Its ultimate downfall is that it tries to take the Gears of War formula and expand upon it. Unfortunately, EA didn’t listen to the old adage, "If it ain’t broke, don’t fix it." Despite some innovative tactics, the game’s poor A.I. puts a damper on some of the experience. Army of Two earns 3.5 GiN Gems out of 5 for being a good game with just a few annoying flaws.