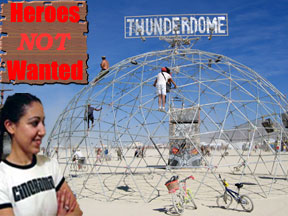 But a heroine would be nice, please!

It's time to say, "no more heroes" because what we really need is a heroine. Let's face it, when it comes to gaming heroes, we've had a glut and they just keep on coming. Meanwhile, you can count the number of female leads, or heroines if you will, on one hand with a couple of fingers missing. The time has come to say, "we don't need another hero, dag nabbit, give us a heroine!"

Sorry for the Tina Turner reference, but maybe if we move swiftly on, we can brush that incident under the proverbial carpet. Heh hem.

Back to heroes and heroines. Cast your mind back through the forest of biotech armoured super-soldiers, rippling with muscles and machine-gunning a path through oceans of alien hoards, leaving only the stench of testosterone and singed flesh in his wake. Back we go, to the last credible female lead in a game. Erm"well there's Lara and old wassername Dark and Jade from Beyond Good and Evil. So that's three, plus that Metroid chick, makes a grand total of four.

We could throw in the DOA girls, but seriously, think about it people. Are they heroines?

No, they are not. Let me explain. Although they can handle themselves, which is positive, they tend to do so in their undies, not so positive. You see how the positive has been turned to a negative by the blatant-titillation-factor? It's worth noting in the search for actual heroines, rather than computer generated glamour models.

If you think I'm being over-analytical, then where are the pin-ups of Solid Snake, lying on a tiger skin rug in an attempt to appeal to women and the gay community? Lara did her fair share of poster art, so why shouldn't Snake? Where's the cheat code to get Master Chief bare-cheeked and all guns blazing?

The sad fact (no, actually, happy fact) is that this will never happen, because games characters are made for by and primarily about men, or boys. The only time we get a female lead is if she's in a string bikini, whether that be metal or fabric depends on the setting, wielding a phallic weapon of some sort. There may be instances where she gets wet and has to change her clothes, but don't worry, her clothes will either be very clingy or flash her panties. Oh, yes, and let's not forget the addition of the back-breaking bosom. How are you supposed to kick serious arse without a cleavage the size of the QE2?

Although there are a few exceptions, on the whole, the female lead is there to look good, bounce and do very little besides. The default character at the beginning of a game is always male, even if you can choose female. If you look at the MMO community, the amount of men that choose a female avatar suggests that there is no reason why there shouldn't be more games featuring lady heroes.

Now, don't get me wrong, I like my female characters to have some sex appeal and I've spent many a happy moment playing with the DOA girls, but we need some characters with a bit more depth than their latex mini skirts.

I want the next GTA to feature a woman as the lead. Surely we've all moved on from scoring with hookers and then killing them. It was fun while it lasted, but I reckon it's time we had a female king pin. You know I'm right. She can look like J-lo if you like, but she can also make it in a man's world without selling her body.

The next Halo-Gears-alike needs to think about the female gaming community too. Take a leaf out of Star Trek's book and give us the likes of Seven of Nine, Janeway and Dax – strong characters who just happened to be female. Okay, so Seven had big bazoomers, but that was just part of her charm, the best thing was she was really cool.

The games industry has to wake up and realise that painting stuff pink just isn't enough to appeal to females over the age of 11. Let's leave the pony and baking games behind us and get some great female characters whose best assets don't only come in a double D.