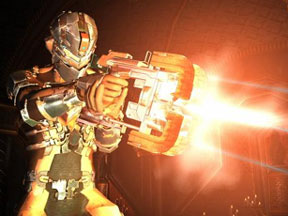 Placing all my love for the Dead Space franchise in a single review will probably be the test of my abilities as a reviewer. The fact that so many facets to this game were executed with grace and style, and that not a single one went awry has me wondering whether or not I can be an accurate herald to this game’s glory. Still, I will try.

The first Dead Space hit the scene in October 2008. With seemingly effortless ease, the story of Isaac Clarke made lasting impressions in both the gamer and developing worlds. Finally, a horror story was delivered that-if played without use of the save stations-allowed a player to experience a game without a single instance of being pulled away from the narrative. All necessary menus, inventories and actions were made an extension of the game, and subsequently added to the atmosphere that brought the game into existence in the first place. That atmosphere was claustrophobic fear in a future age.

The spin-offs that developed from the Dead Space concept were numerous. Suddenly, through the small horror survival story of a very limited cast and a whole slew of creepy monsters, the world beyond the USG Ishimura opened up through movies, prequels, soundtracks, AR adventures, comics and even a decently written novel. All of this opened up the story to those who had an interest of learning more about Unitology, the CEC, and all the other branches that the main game merely mentions as a fact of the underlying setting.

All this work has culminated in the latest release of Dead Space 2. While there are several changes that have taken place in the game, one of the most recognizable deals with the main character, Isaac. Instead of leaning on the familiar "Silent Male Lead" archetype, Isaac has been given a voice and a personality.

Other recognizable changes have come by means of the suits Isaac chooses to wear as he blasts through the infesting necromorphs-beings that use dead tissue to create living horrors. Beyond the visual difference between all the suits of the game, each one has its own advantages. For example, the Elite Vintage Suit comes with an antiquated design and a 15 percent discount that can be used at the stores.

The weaponry options have also seen an outstanding increase, as now in addition to your standard plasma cutter, line gun, force gun arsenal, a selection consisting of javelin shooters, land mine setters, and seeker rifles have been made available for purchase. Beyond that selection, a number of different suits pop up through the course of the game. Some are quite interesting, some are a little plain, all are worth the effort since they each carry their own perks.

The combat style of Dead Space hasn’t seen many changes, but that’s not such a bad thing. Shooters still need to aim for the limbs of their gruesome attackers; however, there have been quite a few new additions to the attacker lineup. One of the most noticeable new foes is the stalker. Much like the raptors of Jurassic Park (in fact, there’s a trophy joined with these enemies that references the film), stalkers sneak behind corners, hoot in the darkness and run you down with a devastating tackle. Beyond that, all the old foes are in full force and destroying civilization on the Sprawl, a space station located one of Saturn’s moons.

Setting is a big thing for Dead Space 2, and the team that brought this game to life did a fantastic job delivering a convincing and diverse set of maps. However, if I have one real gripe, the aspect of underused setting to benefit the title’s story is certainly it.

For example, as Earth-based dwellers, we have no idea how living on a space station would change our everyday habits, or how our everyday habits would influence life on a space station. For more insight on those particular details, I found myself wanting to have more access to the living quarters of the Sprawl. Sure there were some living spaces open for investigation, but these examples didn’t seem sufficient. Each setting in the original Dead Space told a mini-story that made the larger scope seem that much more interesting, only I didn’t feel that I got enough to be satisfied that all the corners had been discovered here.

As I mentioned before, the franchise itself has gone to great lengths to incorporate a huge back story to this title. And while the majority of the game provides the reference to that back story, I wonder if the time has come to incorporate the back story details into the original source material.

Truth be told, however, this problem of self-referencing meta-creation is minimal on the game’s list of shortfalls. In fact, if this is the only problem I can come up with in this review it means two things: I’m really reaching for something conflicting to pair up with all the glory that is Dead Space 2, or that the game has engaged me so much that I’m actively searching for story divots that I hope will be filled with the next bit of Dead Space ephemera that hits the market.

Indeed, the developers for this particular series like to "get it right," and if getting it right means dreaming up some of the most disturbing scenes and visuals that gaming has ever seen, if it means creating some of the best gameplay seen on a console, if it means creating a world and story that leaves the player constantly wanting more, then I would say their mission has been accomplished.

Great job goes to Visceral games on this one.