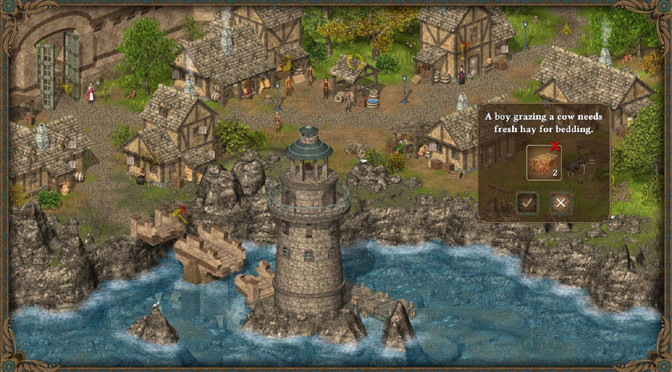 Hero of the Kingdom II

Your sister has been kidnapped by pirates: Are you a bad enough dude to rescue her? NES game references aside, Heroes of the Kingdom II is a very interesting game as it’s a combination of light RPG elements, hidden object puzzles and point and click adventure games. On the way to rescue his sister, the player’s character will encounter villagers, nobles, zombies and, of course, giant spiders, because nothing with RPG elements is complete without giant spiders, to my chagrin.

The RPG elements of Hero of the Kingdom II largely lay with its resource management system…in which you’ll most likely be backtracking to get more of various items ad nauseam in order to make it to the next section of the game. Players will be able to spend their time doing multiple quests, usually in the form of finding a specific person or object hidden on some portion of the map or delivering a certain combination of items to an NPC. Gathering items and doing most tasks an NPC asks of you typically exhausts your strength, which can be replenished at various resting locations around the game’s map. Managing the items and gold your character acquires is largely the focal point of Hero of the Kingdom II, since most items don’t seem to be infinitely renewable and player progress is gated multiple times throughout the story. For example, the first major gate in this game comes when a troll tells you that, to get out of the starting village, you’ll have to appease him with 25 loaves of bread. Bread is also used to rest and recover strength at someone’s house, which you may need to do multiple times since most actions, from helping a villager rebuild their shack to gathering herbs and berries each requires a specific amount of strength to perform. The beginning of the game will mostly be spent doing quests for the villagers, resting when unable to perform any more actions and spending the money obtained from those quests to buy flour and bread loaves which can, in turn, be given to the troll to continue onward.

There are no combat mechanics to speak of in Hero of the Kingdom II- if you want to fight a snake, you’ll need a saber, if you want to fight a spider, you’ll need a torch and knife. Combat is handled by simply clicking on the target with the required items, just like most other actions in the game, so calling it combat may be a bit of a technical faux pas. The actual interface of the game could most likely be described as being akin to a fair number of free to play games, as it’s controlled entirely through the mouse via clicking icons or objects hidden in the backgrounds. Despite this incredibly simple interface, it can be quite addicting to search every area, top to bottom, to make sure that you found every single secret hole or treasure chest. Backtracking is incredibly rewarding, as players obtain five skills, such as lock-picking, over the course of the game and it’s always a good idea to check and see if a treasure chest spotted earlier in the game could be unlocked then, for example.

The story campaign players will progress through is typical of medieval fantasy fare: Two children are left without homes and destitute due to an attack by pirates in their hometown. These two children are taken in by a local fishing village which is then also promptly raided by pirates while the protagonist boy is away. Returning to find his sister kidnapped by some evil pirate lord, the boy chooses to travel across the land, doing menial but oddly addicting chores such as plowing fields, collecting mushrooms and hunting wild game. Will the boy find his sister in one piece? Will the boy find One Piece (it IS a pirate story after all), or will the boy pull himself up by his bootstraps to become the hero of the kingdom? You most likely already know the answer to these questions but far be it from me to spoil anything for you.

The story presentation isn’t exactly riveting or groundbreaking, but the character portraits are drawn quite well and the somewhat addictive gameplay makes up for not having as much plot as The Pirate Wolf Trilogy. The economic puzzles, which involve the previously mentioned resource management, are a far more alluring feature about this title as it bends multiple genres and is very accessible, being a game that an adult could waste some time with as much as a young child. Of course, the time expenditure in Hero of the Kingdom II is not exactly high; a 100 percent playthrough was achieved in about 5 hours for the purpose of this review. If you’re looking for a time sink or game with intense replaying value, this may not be the game for you. There is also little in way of replayability as there is no new game+, nor does anything seem to change from one playthrough to the next.

Hero of the Kingdom II is not the most performance-intensive game out there. The positive for this is that a computer that isn’t specs hardy can play the game with ease, since the graphics card only needs to support DirectX 9.0, a version which was first released in 2002, while the downside is that the graphical fidelity doesn’t even blow most hidden object games on Facebook out of the water. Players that long for a game that will push their rig to the extreme may be better off waiting for Witcher 3 or something similar, because while the art style of Hero of the Kingdom is quite good, it’s not exactly pushing it to the limit like Scarface.

To summarize, Hero of the Kingdom II is an incredibly simple, and addictive, game. Clicking around on the map and trying to remember where to get a mercenary, spear and torch to slay a giant spider is important, and form up the majority of the economic puzzles in this game. The game is quite genuinely fun at a low price, despite the overtly simple, “Save the cheerleader, save the world” story quests. Players that want a strong, meaningful story or technical eye candy in their games would be best to avoid Hero of the Kingdom II. Those wishing to play a very relaxed, casual puzzle/RPG game may find their $8 well spent.

2 thoughts on “Hero of The Kingdom II Continues The Adventure”