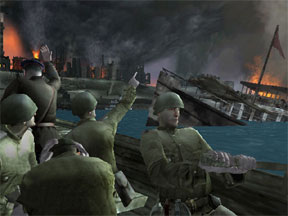 The Second World War has provided much fodder for the games industry over the years. In particular, the first-person shooter is the genre that has extracted the most inspiration from this period in history. Activision’s Call of Duty: Finest Hour is no exception and follows in the footsteps of many great FPS games.

Call of Duty is rich with detail of the period. At some point you expect John Mills to crop up or James Mason doing his best turn as a Nazi general. The game never lets you forget that it is representing a real moment in history and brings it to life with true skill.

Until now, Call of Duty has been the playground of the PC gamer. But PC jocks should not have all the fun, so Finest Hour was released for the console gamer.

Plunged in at the deep end, the player begins as a Russian soldier. The premise is fairly simple – kill the Jerry scum. The very first scene is reminiscent of the opening of Saving Private Ryan. I’m sure it was no accident, but it works well at throwing you into a confusing maelstrom of barked orders, explosions and the screams of comrades as they get blown to bits. This is all accentuated the first time you stand too close to an exploding grenade. All sound is lost, your vision is blurred and time slows only to throw you back into the fray.

Your first mission is to stop the onslaught of Nazis in Russia. And as you move further into the game a network of characters builds up. Completing the first couple of missions as a Russian soldier, you then suddenly jump into the shoes of a female, Russian sniper. One of my favourite moments was fairly early in the game, holed up in a warehouse sniping German gunners as they tried to break down the gates.

Then it’s time to jump in a tank and rumble through the streets of Stalingrad. The loose storyline leads to the British troops and finally the American tank invasion in Belgium.

As the Brits you are in the middle of North Africa and the mood is very different from the desolate cityscapes of Russia.

This is where the dialogue comes into its own as a player from the UK. Regional accents and phrases really bring the British soldiers to life and we’re back in Johnny Mills territory. It’s great hitting the deck in a Tunisian town and attacking Germans from a doorway in a deserted street, surrounded by the shouts of your soldier chums.

The graphics let this game down. So much attention has been paid to the general presentation and sound of the game, but it’s a shame the graphics don’t reveal the same care. Low resolution and a murky colour palate make it very difficult to see what’s going on sometimes, to the point of making it hard to play.

However, you do get to fight some monumental battles from history and play as each of the Allies. The Battle of the Bulge alone will satisfy anyone keen on WWII history and fighting with all your might to capture the last bridge over the Rhine.

The gameplay can be a little confusing at times, leaving you not quite sure what it is you need to do. Generally, you get to the point where you think "to hell with it I’m just going to charge in all guns blazing" and er"that’s actually what you were supposed to do.

The checkpoint system does leave you retracing old ground time and time again, which can get frustrating. You become adept at going two thirds of the way into a level just in order to reach a point where you can retry it from a difficult point. But in Call of Duty’s favour, you generally do go back for more, rather than switching off.

All in all, Call of Duty is a very enjoyable FPS. The graphics do let it down a little, but you can’t fault it on atmosphere and variety.