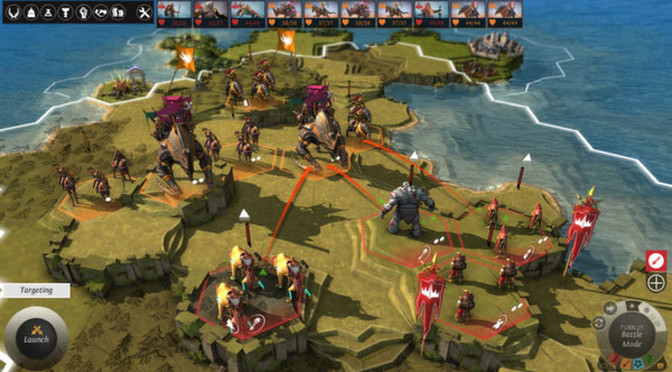 There’s something daunting about jumping into a strategy game for the first time. No matter how many you’ve played, there are certain nuances every game has that can require a steep learning curve to fully master. With the name “endless” in the title, I could only image the onslaught of options and sea of choices I’d have to navigate. And that’s just it: I could only imagine because Endless Legend strikes an elegant balance between quick accessibility and surprising depth. It has won countless strategy awards for this and recently expanded to include the Guardians DLC for just $10, which we jumped into.

For those of you unfamiliar with the core Endless Legend gameplay, the game’s brilliant tutorial quickly thrusts players into a series of scenarios that seamlessly introduce basic mechanics and gameplay. At the same time, it also showcases Endless Legend’s more advanced features, such as unit customization and the light RPG elements that have players sending their armies on various quests throughout the land of Auriga.

Each game starts out with players building a city, a critical step in any strategy game and one that can quickly ruin an entire game if done thoughtlessly. To take the guesswork out of city placement, Endless Legend’s interface vividly details the pros and cons of building in certain areas by showing you which resources your city will generate and in which quantities every turn. That motif of easily digestible information permeates Endless Legend’s experience. At any point, players can hover the cursor over a resource to get detailed statistics about it. The game even allows you to reallocate workers to immediately see what impact it has on production and then instantly move them again if it doesn’t produce the desired effect.

Guardians takes this a step further by expanding the base game with a bunch of new units, buildings, and technologies that make the game a lot more meaningful when picking out where to build a city and how to specialize it for maximum effect. One of the most important additions to the game are Legendary buildings, which can be built with one each era, except for the sixth one. They are so huge that they become districts themselves. For example, an industrial megalopolis adds 25 points to your industry score (which in this game is huge).

Like in Civilization, each Legendary building can only be constructed by one player and thereafter becomes locked for everyone else. To get said building you need to not just commit the resources but also have the prerequisite such as building four extractors before you can even break ground. It’s something to consider given that nothing is banked. Endless Legend takes a use-it-or-lose-it approach in how you gather materials. Food, industry and science generated each turn all go towards their respective goals. For example, food that’s not being used towards general upkeep goes to increasing your total population, meaning there’s no need to manually allocate it to something else. Likewise, industry is used for building new units, structures and upgrades, but there’s no need to bank a specific amount to build. Simply queue a series of items, and your industry-per-turn goes to completing it.

The non-linear research tree also proves to be a boon. Rather than forcing players into choosing a set of technologies to unlock, the game allows you to pick and choose which unlocks best match your current goals. After researching six technologies, the next tier becomes available. As with food and industry, science generated each turn goes towards all unlocks, with players able to queue what to research in much the same way units are built.

In setting up gameplay this way, Amplitude Studios allows players to focus on exploration and constant expansion, which in turn is rewarded through units leveling up and a range of customization options for each faction’s army.

The new Guardians themselves can also change how the game performs. Each of them has a unique look and can easily change the tide of a battle. Most of them have game-altering combat abilities such as mind control and the ability to teleport which can really take you by surprise, or which can be used against your enemies for a surprise attack.

Guardians can’t join armies, they are standalone units that act as armies of their very own. Unlike Legendary buildings, there aren’t a lot of prerequisites. You can unlock one starting at era three and two at eras four and five. You need some strategic resources to wake the guardian, but otherwise can do it with minimal planning.

With the core game, exploration wasn’t limited to armies alone, though. Hero units, each with skill sets tailored towards certain facets, deliver an extra layer of strategy. As heroes level up, they gain access to unique skill trees, meaning they can be built to fit numerous scenarios, such as combat or city enhancement. It also prevents players from pigeonholing themselves into one gameplay style since each skill tree caters to a different gameplay aspect.

With Guardians, this mechanic is not changed too much, though the addition of Legendary Deeds does modify things a bit. Deeds are like legendary buildings in that they can’t be obtained by more than one player. The first who gets is the one who keeps it. For example, being the first to pacify eight villages gives you a technology that boosts your initiative for the rest of the game, which might lead you to push into that at the expense of working on something else.

With all of the new exploring and customization options, it’s impossible to ignore the most obvious fact about Endless Legend: It’s outright gorgeous with or without Guardians, The world map serves as so much more than just a means to move characters around and gather resources. It stands on its own as a work of art. Opulent colors pop off the screen everywhere you look, bringing the thoughtfully crafted fantasy world to life. Beauty isn’t just limited to the world map, though. Even the menus themselves feature a polished, crisp design that makes navigating a breeze. It’s just one of the small features that highlights the level of detail Amplitude Studios put into their work. Guardians just adds to this, especially with the epic look of the Guardians themselves.

Another new feature is cooperative quests, which can be taken on by two factions who each contribute to the overall goal and then share the benefits once complete. This feature might need a touch more work because it’s very difficult to get the AI-controlled factions to agree to work with you. Normally by the time you get that option, you have likely come into conflict with them and diplomatic relations are sour to the point where they are not going to agree to work with you.

Finally there are Global Events in Guardians to really flesh things out. These are overarching events that effect everyone. They do things like boost the collection of certain resources for a time. They are difficult to take advantage of since you don’t know they are coming, but if you’ve built a flexible enough society you can probably jump in and make use of the boon. They are not really game-changing, but add even more advanced elements to an already fantastic game.

With gameplay that focuses more on exploration and less on bogging down players with tedious micromanagement, Endless Legend does what so few strategy games have in the past by blending depth with accessibility. Guardians boosts these advantages even further, and for only $10 is a real treat for what is already an outstanding game.