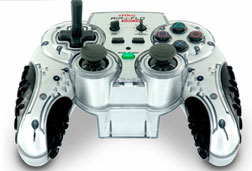 I love wireless controllers. It seems that every couple of months when I am not using a wireless controller with my PS2 I have some type of accident where I end up getting tangled in the cord, which is never good for the electronic equipment on the other end, or for me as I fall to the ground.

Another problem that many gamers find is that their hands get a little bit sweaty after hours of gameplay. This has not happened to me quite so much, but perhaps once in a while I will experience this when playing with friends.

The AirFlow wireless controller from Nyko defeats both these problems in a single stroke.

The AirFlow looks like an oversized PS2 controller. It has the standard buttons and joysticks, but the handles have holes in them and the top of the controller has a huge air vent. You need to put four AA batteries into the controller to make it work, and thankfully batteries are included with the package.

You also need to plug the wireless transmitter into one of the controller ports on the PS2. There are eight channels that you can set on the transmitter, which must match up with the channel you have set on the controller. While this can be a little complicated, it ensures that you can fix problems if you are using two controllers at the same time, or if you are getting interference from your blender or something.

The wireless component worked well, especially if you are facing your system as most people do when they play. It also worked when I hooked my PS2 up to an LCD projector and sat in front of it not facing the console, but on occasion I would notice my sword would not swing when I mashed the button. So facing your system is best if possible. If you are, the range is pretty impressive. I was able to play games while lying on a couch across the room, so long as I was facing the console.

The fan is an interesting addition. It sucks air in from the top of the controller and distributes it to your hands by funneling air down the grips. You can control the fan speed by using a little dial. Mostly I kept it to about one third speed. My house is air conditioned in the summer and if the fan was set to high my hands got to cold.

As a bonus, there is a little joystick you can screw into the D-pad in case you play a lot of arcade games.

The one main problem with the setup of the controller is that the eight channel dial and the fan speed dial are identical and pretty close together. It’s easy to think you are adjusting the fan and instead turn the controller to a different channel, especially when playing in a dim room.

Battery life might also become a problem, though in truth the controller performed better than I though. The batteries died after about six hours of use. Higher fan speeds will probably knock that time down. So you might want to have a supply of AA batteries handy.

In all, the AirFlow performed a valuable function, which is keeping me from falling on my face. It also kept my hands dry. Hardcore gamers will probably love this controller, so long as they generally face their system when playing, and don’t mind the extra girth which is unusual in a PS2 controller.

The Nyko AirFlow earns 4 + GiN Gems for keeping me cool and safe while playing.