Here at Gameindustry.com, we tend to spend a lot of time looking at one screen or another. And after a long day of reviewing videogames, a lot of us go home and, you guessed it, play more games. That means we clock in a lot of screen time, though many gamers do the same thing, especially now that mobile gaming is a big thing, so you can add time spent on your smartphone to your overall eyeballs-on-screen time.

The problem with this lifestyle, as many of you are probably discovering, is that it generates a lot of eye strain. It’s not our fault. Our devices naturally generate a lot of what is called blue light, which is a temperature of light on the high end of the wavelength spectrum. Bombarding your eyes with those higher wavelengths has been proven to be unhealthy in the long-term. We even had a reviewer here at GiN whose doctor made her cut back on reviews in order to help save her declining sight.

Editor’s Note: If you are looking for more information about blue light, check out this scientific study which covers the issue.

There are some workarounds now that this problem is getting to be more widely known. You can get a blue screen filter for your monitor, and some displays now come with low-blue-light modes. Some prescription glasses also offer blue-light protection if you can afford it.

Despite these new protections, not everyone wears prescription eyewear, yes I am quite jealous of you if you fall into that category, and I am sure that most offices don’t offer blue screens for their monitors, much less for smartphones. So when Eagle Eyes Optics offered to send a set of its new Eagle Eyes 4in1 SuperSight System over to GiN for review, I jumped at the chance. Anything that can enhance and protect gamers, allowing us to play for longer periods of time without harming our vision or causing eye strain is a good thing.

The package that arrived was at first confusing. I was expecting a pair of glasses. What I got was a whole interchangeable system where I could quickly add the correct lens for every situation. That includes working on the computer, walking around in bright sunlight, traveling at night and being in a low-light environment like a dim room or the outdoors at twilight. 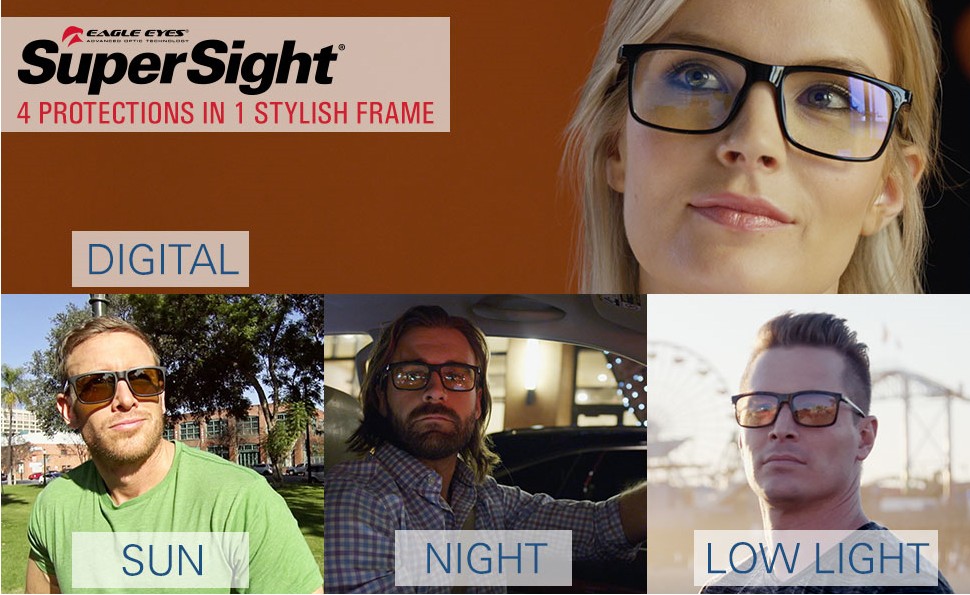 The base unit is a pair of good-looking, stylish clear lenses. They almost look like my normal eyewear. Although the lenses look clear, if you hold them up to the light you can see a slight blue sheen on them. When you put them on, they drape the world in a little bit of a yellowish-brown tint. That was a little disconcerting at first, but I quickly got used to it. You can walk around wearing the base unit and everything seems pretty normal, perhaps a little bit darker than without them, but nowhere near the level of wearing sunglasses.

More importantly, they make computer screens so much easer to look at. This review was typed wearing the base unit, which are called tech glasses, and there was almost no eye strain at all. And this was after a long gameplay session of Generation Zero, which GiN’s Michael Blaker is reviewing, with a tiny bit of help and fire support from me. Quite a few hours doing both activities, and I didn’t experience any eye strain at all. Normally, I would have had at least some mild discomfort after so long without a break.

Where the Eagle Eye glasses becomes a whole system is when you attach one of the three optional lenses to the base unit. There are tiny magnetic connectors in the front of the base glasses which allows the other lenses to snap onto them, along with a little front hook for extra safety. When the front panels are put in place, you really can’t tell that they are not part of the original frame as they are all very thin. So when you are wearing one of the extra glasses, you still get the baseline blue-light protection, but also the additional features offered by the cover lens.

This is where I started to feel a little bit like a superhero, you know, one with perfect vision for any environment. Although it won’t do x-ray vision, the three lenses do assist in either bright sunlight, low light areas or at night. The night vision one was the most surprising, and was tested by driving around on various highways and backroads after dark. Those lenses have a fully yellow-looking lens, which somehow captures and accentuates the available light while cutting down on the glare. If you have ever been blinded by bright headlights or even street lamps at night, these will help to prevent that.

The low-light ones by contrast feature amber lenses. They are a bit more like sunglasses compared to the night lens, and work by accentuating solid features like road surfaces, fences, signs and things like that. They do a good job of cutting through foggy conditions (or probably snow though I was unable to test it against that since it was finally turning spring around the GiN HQ). The cool thing is that you can use them in twilight conditions or rain and fog, and then swap them out for the night vision ones as soon as it gets fully dark. And swapping lenses takes just a few seconds.

The final weapon in this visual arsenal is the sunglasses lens. These were developed for NASA missions and block 99.9 percent of UV radiation. They are also highly scratch resistant, which is good given that the sunglasses are likely going to be the most used during physical type of activities outdoors.

Grab a pair of these amazing glasses on the Eagle Eyes Store.

The complete pack of baseline glasses and three lenses cost $119 on Amazon or the EagleEyes store. That may seem a little high for non-prescription glasses, but consider that you are really getting four sets of glasses for that price. And they don’t just differ in style, but are actually each designed for a specific purpose or environment. So it’s like getting a top, high-end pair of sunglasses for about $30, low light and night glasses for $60 combined, and then the tech glasses for work or play on the computer (and your smartphone) with blue light filters for $30 as well. Even if you don’t use some of the lenses a lot, having them there means never being in a situation where you can’t employ your new visual superpowers.