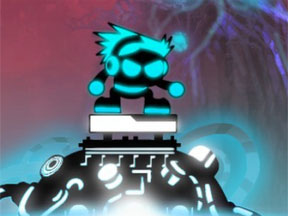 Indie platformers are a dime a dozen, so in order to get noticed among the sheer numbers of others, games need a particular kind of quirk or gimmick to catch the attention of oblivious consumers. Techno and dubstep styled music, along with features of stages reacted to the beats of the music, is the particular quirk exerted by Rush Bros to stand out from the crowd. Is this enough for a, "Shut up and take my money?" Let’s find out.

Rush Bros is a co-op centric platformer, one focused on assaulting your eyes with brightly colored visuals while offering time trial focused gameplay.

To call Rush Bros a racing platformer would be a bit of a misnomer, but the major focuses of the way the game plays is to finish the levels as quickly as possible and with as few deaths as the player can muster. Of course, deaths will be quite plentiful what with spikes to impale and blunt platforms to crush that erupt from the walls with violent fervor depending on the type of music being played.

The (beat) hazards are relatively plentiful, and whether the player is wall-jumping, bouncing off of bubbles, soundwaves and moving buzz saws, there’s a profusion of items to cause a player to have an unfortunate death added to their total.

Rush Bros, even in single player, carries a decent amount of challenge, though it may be a bit heavy-handed to compare the game to titles like Super Meat Boy for those more accustomed to these kinds of games.

Speaking of single player, there’s a multiplayer component in the game as well if the eponymous, "Bros" didn’t originally bring that to light. Multiplayer is handled in a drop-in, drop-out nature, whilst playing the game notifications for challenges will appear along the screen, allowing the player to drop out of their current level and race to the end of a stage against a human opponent. Careful use of the power ups, such as Double Jump or Speed Up, will greatly aid a player in overtaking an opponent and getting to the end of a stage more quickly. Careless use of the Speed Up can definitely lead to a death and a reset back to the beginning of a stage, unfortunately, so familiarity with the stages is definitely of paramount importance.

This is why it’s helpful that, after a multiplayer game, a player can jump right back into single player and await a challenge. Of course, players may be waiting a while…only about 2 challenges were ever noticed among several hours of play, and the remaining multiplayer games played for the purpose of this review had to be arranged outside of Steam. Whether this is a glitch and players just can’t see each other playing the game or there really are just that few of players is a mystery, at this point.

The controls, of course, are a major player in a platform game and it’s nice to say that they’re quite tight in this respect. Keyboard control is an option, though a screen populates before the game even starts, informing players that a controller would be the best option, and it is. Controlling the game is simple and a pleasure, and the only minor complaint about the controls is that sliding down a wall is incredibly slow, for some reason, in such a fast-paced game. A great feature is that keys can be rebound on the controller, just in case a player might prefer a certain button to be jump over another. No matter which button an action may be bound to the controls are ultimately responsive; you may die quite a few times (audio)surfing the levels of Rush Bros but it won’t be the result of unresponsive controls.

Of course, one important feature while thinking about a game like Rush Bros is music and how it interacts with the environments of the game as promised. Unfortunately, the music integration isn’t quite as impressive as its adherence to platformer roots as platforms are supposed to appear and vanish with the beat, moving hazards are supposed to do the same. The end result is that sometimes the timing of bubbles, soundwaves, spikes are what could only be described as being a little…off.

Whether the game’s detection of any sound beyond thumping base notes can or will be patched in the future is an unknown, but while the game allows you to use your own soundtrack its implementation is a little less than stellar. This issue with a custom soundtrack makes some levels, notably one toward the end involving bouncing on bubbles and soundwaves above a watery pit of spikes, far more difficult to complete than had you used the in-game soundtrack of upbeat polyrhythms.

The dubstep/dance oriented soundtrack of Rush Bros isn’t exactly a detractor from the experience of the game; the track is quite catchy even if someone isn’t a terribly huge fan of that breed of music. The sounds mesh quite well with the original soundtrack, the sounds of springs or being horrendously decapitated by buzz saws are fairly well placed and recognizable, even if the descriptions of the sounds are more expressive than what is shown in-game. Even better, while the objects of the player character and the obstacles that must be overcome are fairly simplistic, the background imagery, which also tends to have some kind of variation with the music being played, is remarkably well designed and an aesthetic pleasure.

To summarize: Rush Bros is a platformer title with a twist of allowing you to use your own music to let players get into their own rhythm zone while attempting to conquer 45 individual levels in both single and multiplayer. Unfortunately, the multiplayer component seems to be slightly dead at the moment, but when a match is actually found it’s probably the best Rush Bros has to offer. Being a time-trial focused game opens up the opportunity to replay levels, even in just singleplayer, to get the lowest possible time on the leaderboard or a lower death total. Be that as it may, however, Rush Bros is a game that is more geared toward an enthusiast than a journeyman or inexperienced gamer, as the difficulty may appear to be less of a challenge and more of a constant and needless frustration. Though, for only $10, there is a lot of content to enjoy should you be a more seasoned platform gamer.