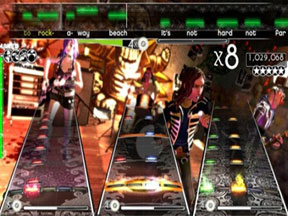 Last year Rock Band was an instant hit. Taking all the best aspects of past music based games (Guitar Hero, Karaoke Revolution, etc.) and combining them into one package was a recipe for success. But while there were a lot of things done right, there was one critical factor that was missing: the ability to play the main game mode, Band World Tour, online, requiring bands to get together in one location, something that could prove difficult for those who enjoy playing from various locations across the country.

Thankfully, Rock Band 2 fixes that issue. By implementing an online version of Band World Tour, it’s now easier to allow online friends to get together and complete all their BWT requirements. While bands can have dedicated members, there is also the possibility to have another player sub in as a backup on their roster, a very smart move on Harmonix’s part. The only catch with the new Tour based game modes is that the original Guitar Hero-like tier based modes are now gone, and while that might concern a couple Rock Band `1 purists, I feel that it helps differentiate Rock Band 2 from all the other titles on the market.

But of course the issue with BWT is based entirely on how many songs will be available. Those playing Rock Band 2 for the first time might be stuck with the same songs over and over again, even with its massive lineup of 84 songs, all master tracks (with an additional 20 coming soon as a bonus download) when facing extended setlists (either self created or pre-determined.)

However, for those with tons of songs downloaded that is easily remedied. Even better, owners of the original Rock Band are able to transfer almost all of the original’s songs for a small $5 license charge. Three US songs are not available in the transfer: the master track Enter Sandman from Metallica and two covers (Run to the Hills by Iron Maiden and Paranoid by Black Sabbath,) but in my opinion they are acceptable sacrifices.

Harmonix is promising over 500 songs by the end of the year, and by the way they are adding downloadable content on a weekly basis, and the initial 104 after bonus content, it looks like they are keeping true to their word.

In addition to the revamped Band World Tour mode, for those who do miss the original tiered system, there are additional challenges available consisting of a predetermined setlist, including all downloadable songs and songs transferred from RB1. Additional Battle of the Bands online competitions are also available for those who want to prove who the best band are on the web.

Replay value is completely off the roof this time!

But all of this would not matter if the core game engine was changed. Thankfully that is not the case, as Rock Band 2 follows the same gameplay formula of the original. But I couldn’t help but think that some of the new songs are much easier from the first game. Whereas I had difficulty getting 100% on Hard, it became tradition now. Maybe it’s because the game feels more streamlined, or because I am getting better.

Rock Band 2 was originally released as a timed exclusive for the Xbox 360, at least in game form only. The separate RB2 wireless guitar and drum sets are also available in stores but they were not tested for this review (the original guitar and drums were used.)

However, by the time this review is posted, the 360 Special Edition (with the new instruments) and the PlayStation 3 version should be out, with the Wii and PlayStation 2 releasing mid-November.

Rock Band 2 is a perfect example of "if it ain’t broke, don’t fix it." Well actually they fixed the online world tour (since it was nonexistent before) but everything else is as perfect as before.

It will be interesting to see how the game fares when Guitar Hero World Tour comes out, but as far as I’m concerned I will definitely be coming back, especially with the over 500 songs available by the end of the year!