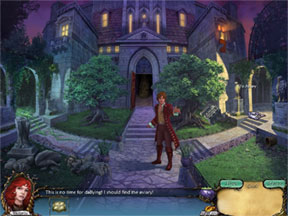 There’s a new vamp in town, so Edward from Twilight, Bill and Eric from True Blood and the Salvatore brothers from Vampire Diaries need to make room!

A new casual type game from Play First introduces us to Damon, and no not Damon Salvatore but a man cursed by a witch (Celeste) to live life as a blood sucking vampire.

There is hope for him and it comes in the form of a woman from the village he is terrorizing. Victoria is determined to save her village from the vampire, but soon finds herself growing fond of Damon, and she becomes focused on helping him be free of the witch and his curse.

Love and Death: Bitten is a puzzle/ hidden object game that incorporates an interesting storyline to move you through the different locations, starting first in the village, then in the woods, a local wise woman’s home, and finally to Celeste’s castle.

Damon is not a day walker, so you will play as Victoria for the day sequences and then as Damon for most of the night ones. A crow will appear in areas and by clicking on him you will receive your list of twelve items to locate. Some are easy to find while others require an action to be completed like placing four jars in a row or placing spread on a cracker. You do have a hint meter that will fill up to help you when needed. This comes in handy at times, but on some of the puzzles it becomes bloody worthless.

Arranging items in a certain order with no clue what order the game is looking for, nor the meaning of which and then the hint feature informs you that you just "placed the coins in the wrong order" made me assume that the game considered me an idiot. I would basically just keep trying till I did figure it out.

Thankfully there are only a few puzzles like these where you may feel clueless as to what to do next. The strategy guide online is helpful when you get lost and you can find it right here if you get stuck, which may just happen, at least infrequently.

Solving these puzzles will grant you keys and they are used to open the brackets where the potion is kept that will free Damon from his curse. I did scratch my head over why the potion even existed, and why was it kept in the castle where he stayed. I guess the witch was not as smart as she would like to think.

There are 100 golden leaves to locate throughout the game that unlock a feature called "glimpse of the future" which you will get to play once you compete the game.

This was where the game left me disappointed. I sat in front of my laptop with my head tilted, a puzzled look on my face and uttered the word "Really?" The game is still very enjoyable though, even with the fizzle at the end of the story.

The graphics are well rendered and gave me the impression of a picture story book while playing. The "hidden" objects are sometimes not well hidden at all but there are a few items that will have you gazing at the screen searching for its location so that the game is not too basic.

The voice acting at times is not bad but there are occasions where the acting becomes low "B" rated at best and mostly from the witch, Celeste. I suggest having a good laugh on these instances.

The game is rather short but also enjoyable and the cost is nicely priced at $6.99. It can be purchased online and downloaded at either Play First’s or the Big Fish Web site.

On a side note, Play First entered a multi year alliance with Big Fish Games this year where Big Fish became the distributor to all Play First games. This allows Play First to focus on higher priority projects like iPhone and iPad application development, Facebook gaming, and console games.

This is a definite plus to all fans.