Hey all I’m back with a game from a genre I don’t usually get to review. It’s Generation Zero!

Plot: The plot is barebones at best, so unfortunately while there is a story, it’s very lacking. Honestly it could use either a lot of work or just be dropped altogether. Either way would benefit the game, but as it’s not this games primary draw I’m not going to give them too much grief over it. How and why robots have seemingly killed an entire island full of peaceful residents, if you discount the copious amounts of guns and ammunition, is never answered to a very satisfactory degree. 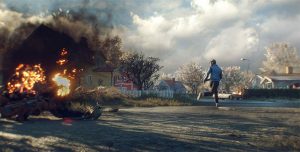 Gameplay: The gameplay is a lot like other survival games out already, you get dropped in a world filled with various boxes containing supplies, and enemies that get progressively more difficult to defeat. How you go about playing in this sandbox is up to you and personally I’ve always been the sneaky sort, which is highly encouraged in this game. You have limited supplies you can carry, especially at the start, and going in guns blazing is likely going to get you killed.

For me my go to method is to use a lure, typically a radio or boombox and set it up next to a flammable can of gas in a place where I can shoot that can from relative safety. When I round up all the enemy robots in an area successfully I can blow them up with a quick shot to that can and proceed to deal with the various buildings they seem to always congregate around.

Take down those deadly toasters with a copy of Generation Zero from Amazon! 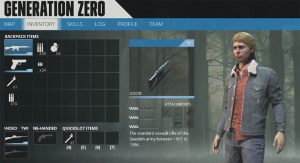 Speaking of buildings another small annoyance is the fact that it’s not exactly easy to determine which buildings you’ve searched once you get to some of the bigger towns in the game. Personally I’ve taken to shutting every door behind me, a left over habit from my zombie game days when I was forced by a college roommate to play them, and to shut off every light. The annoyance comes in the fact that some light switches seemingly do nothing, and/or don’t affect the lights in the rooms. There’s usually a least one room in each building where at least one switch doesn’t turn off a light that’s present in that room.

Thankfully when combined with  shutting the doors, because there’s usually at least one left ajar in each house, it does help when you try to clear out a town for supplies. 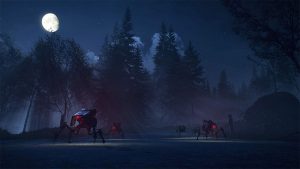 Another issue I had is losing weapons when joining a multiplayer game. I lost my rather good shotgun I had scoured multiple towns for hours to find when I tried out the multiplayer function of the game. Calling that a minor annoyance is an understatement. When I started playing alone again, trying to salvage the situation, I still had no shotgun and couldn’t find a lesser replacement for hours. 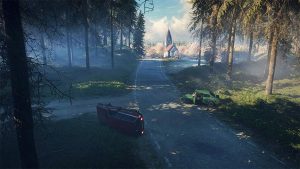 Finally when speaking of the “gunplay” itself it’s not that great. Now this is a very different game from something like Destiny which has amazing gunplay, even if everything else is lacking, and the fact that using guns is discouraged is probably a big reason they didn’t bother to make the gunplay feel good. Still it’s an experience that is lacking and should be noted. 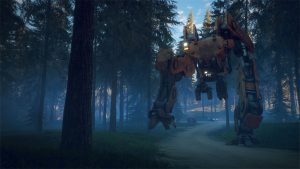 Art: The art is okay, but nothing to write home about. It’s not terrible, and is pretty good to be honest but there are times when I was questioning how far the QA team got into checking for various art issues. There were multiple issues of lootable containers being stuck inside walls or other objects, and times when special effects like leaves falling were in improper places. One of the first places you come across in the game, if you follow the bread trail of the “story” is a bunker. I was deep inside it and still saw falling leaves, despite being underground and behind multiple closed doors, calling it a breaking of suspension of disbelief is an understatement and a major “sin” for any person trying to make an entertainment experience. 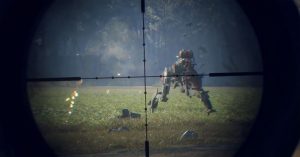 Music: The musical score is pretty nonexistent, and given the survival genre that’s perfectly okay. Hearing an uplifting background music would be odd when you are traversing towns empty of all life. The sound effects are alright, but nothing too noteworthy either.

Overall: If you love survival games, Generation Zero isn’t a bad entry, but it’s not a masterpiece either. There are issues, and a lack of satisfying “gunplay” hamper this from becoming something that will be talked about for years to come like other games might.

For those who like: Survival Games, Alternate History Games, Semi-Contemporary Settings, Stealth and Nonlinear Thinking.

Not for those who don’t like: Any of the above, or not having amazing “gunplay.”