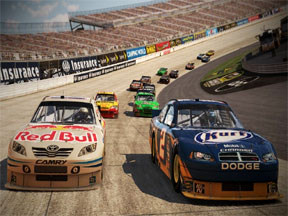 It’s strange that exactly 10 years ago I was not a fan of NASCAR. I was one of those who fell under the stereotype that is was nothing but going around in circles with no excitement whatsoever. Then came the 2001 Daytona 500, which many fans remember as the day that Dale Earnhardt died. At the time I didn’t realize how big he was, but I came to learn very quickly.

Since then I was given a crash course by some of my colleagues about the rules, but it wasn’t until EA released NASCAR Thunder 2002 on the PS2 that I really learned about the elements of the sport. Afterwards I started to watch races on a weekly basis pending my own availability, and even make it a yearly tradition to attend the Coca-Cola 600 at Charlotte Motor Speedway with my girlfriend.

But since 2002 I had been playing EA’s NASCAR titles, as they were the exclusive license until NASCAR 09 came out. Since then there was a temporary drought of the franchise. With the exception of a limited feature in Gran Turismo 5, I didn’t get the chance to play a full season. Thus when I heard Eutechnyx, a company I remember for some excellent racing games (namely Test Drive: Le Mans on the Dreamcast) was working on a NASCAR game for the 360 and PS3, I was immediately hooked and couldn’t wait to see what they would do with their freshman effort.

And sadly, that’s what the game turned into…a freshman effort.

Don’t get me wrong though. NASCAR 2011 is not terrible. From what they got so far, it is a good start to what I hope becomes a franchise. The game features all the drivers from the NASCAR Sprint Cup Series, as well as select drivers from both the Nationwide Series (namely Danica Patrick) and the Camping World Truck Series (Todd Bodine, Jennifer Jo Cobb) but for some reason, their NCWTS paint schemes are actually on Sprint cup cars. I can understand the Nationwide cars but the truck schemes just seem a bit strange. In addition, all the cars are represented of the 2010 season, as well as the tracks and the season schedule.

There is, however, a planned free update that will make the game set for the 2011 season, including the actual schedule – including a race at Kentucky Speedway in July – the correct 2011 cars with the new paint schemes (can’t wait to race Gordon’s Drive to End Hunger Chevy,) the new point system, and even the newly repaved surface at Daytona.

As a result, NASCAR 2011 follows the 2010 Sprint Cup season race by race, and still uses the original points system, where 175 points is given to the race winner (with 5 point bonuses for leading a lap and leading the most laps.) However, there is no Sprint All-Star Showdown in Charlotte, as well as the Shootout at Daytona, nor the Qualifying Gatorade Duel races. There are, however, bonus invitational races, but they feel more like mini-games to test drafting and lap times.

Adding the more authentic races such as the Showdown and Gatorade Duels would have been more welcome. At least during standard races, the rules are accurate, even going as far as making the finish a Green-White-Checkered flag should there be a rare caution near the end.

The game features a level based ranking system. As you race, you earn NASCAR experience points (or NXP) which is used to level up, and in doing so, special pins and paint schemes can be unlocked. There is also a design shop that allows players to create their own paint scheme for their cars, which can even be taken online for up to 16 people to play at one time.

But the problems in the game come in the form of execution. The pack concept in NASCAR is there, as we should be aware of, but sometimes it gets a little too aggressive in the AI. Plate tracks, namely Daytona and Talladega, are notorious for a form of racing called "bump drafting." What this means is a driver gets up behind an opponent’s (or sometimes his own teammate’s) bumper. By doing so it removes the air resistance from the front of his car more than a standard draft would, and in doing so his speed will always be higher than when out in the open. However, bump drafting is a very risky process as it could end up wrecking the car in front of you out, and even cause what is known as "the Big One," a wreck so massive that it can even take out half the field, or worse!

NASCAR 2011’s bump drafting is very aggressive. So aggressive in fact that it almost always results in me getting spun out. And there lies another problem in the game, the caution flags are WAY too strict. If spun out in a real NASCAR race, the chances of a caution flag are very high. Not so here. In fact, there were times I witnessed "The Big One" and the caution flag was never waved! NASCAR officials would be in serious trouble if this happened for real, due to the organization’s dedication towards driver safety (resulting from the Earnhardt crash of 2001) so if this game is to recreate the NASCAR experience, the caution situation needs to be looked at more!

Same goes for when going into pit road. There are times when a group of cars go onto pit road and they are even more aggressive, causing wrecks in pit boxes! This would result in hefty fines if done for real, and even suspensions! Cars are to run at a set speed limit based on track (which thankfully, NASCAR 2011 enforces well when the player enters,) but the AI needs to learn it as well.

One more thing, make sure you have some fuel left in your car before you pit. If you’re fuel ever runs out, it’s an automatic DNF, which again doesn’t make sense because drivers do take fuel window strategies to mind and then can at least coast into pit road when out of gas. Not here though, and again, it does not make sense at all!

When I do successfully get my car into pit road, a menu pops up to allow you to make changes to your wedge (making your car either run loose, to turn easier, or tight, to make your car run more straight,) 2 or 4 tire changes (with the option to not get them changed for sprint situation) and how much gas you want in your car. There is also an advanced pit window to go into more detail on what you want done with your car.

However in the basic menu, the biggest mistake that is done is the fuel request is set at no fuel by default. Almost all pit situations involve adding fuel, even if just a splash for Green-White-Checkered finishes. But setting the pit menu to not add fuel by default is unforgivable. In fact there were times I left pit road realizing I didn’t get fuel and it ended my chances at a win. Not only should fuel be at full by default, but Eutechnyx should take a cue from EA and allow pit options to be predetermined by a pause menu option.

Finally, when my car gets into the designated pit box, the mocap footage of your pit crew is actually quite excellent…and then the clipping occurs. Cars actually DRIVE RIGHT THROUGH my pitted car with no impact whatsoever. I don’t see how a glitch so bad can be ignored unless the game was rushed to store shelves, and I would gladly accept a delay to get this resolved.

I have said many times that this game is a freshman effort from Eutechnyx, and I know their track record in racing games. NASCAR 2011 can be very fun when it plays the way it is supposed to, but these glitches need to be addressed right away. I am really hoping that when Eutechnyx brings out the 2011 season patch, it will also resolve many of the gameplay issues, because then it might end up being a high quality product. But as it stands now, it is rushed, buggy, and at times, frustrating.

Get to work Eutechnyx! You’re black flagged until you get the bugs fixed!

PROS: Return of the NASCAR franchise after a year hiatus. Full 43 car grid, including drivers from both the Nationwide and Camping World Truck Series, as well as the Sprint Cup Series. Invitational mini-races offer a unique, if limited, challenge. 23 tracks, including Kentucky Speedway. Unlockable paint schemes, with a planned free DLC for the 2011 season…

CONS: …which means you’re stuck with the 2010 season until then. NASTY glitches abound. Bump drafting by AI in the plate tracks way too unforgiving. Events that should result in a caution in NASCAR for real do not happen in the game! Running out of gas is an instant DNF…why can’t I coast into the pits? Pit road menu can be a pain to use with such a short window, and why is no fuel chosen as default? No Daytona Shootout, Gatorade Duels, or Sprint All-Star Showdown.

Special Thanks to Jerrid Foiles from Foil-Wrapped Productions for editing my video footage of the game’s glitches. The video can be seen here: http://blip.tv/file/4979687

Editor’s Note: We have been contacted by the developer and they are concerned about the problems that players have been having. Here is what they say "Eutechnyx has been listening to all the user, community and critic feedback and has been hard at work creating a patch to address some of the issues folks may be experiencing." We at GiN hope the new patch fixes the problems.