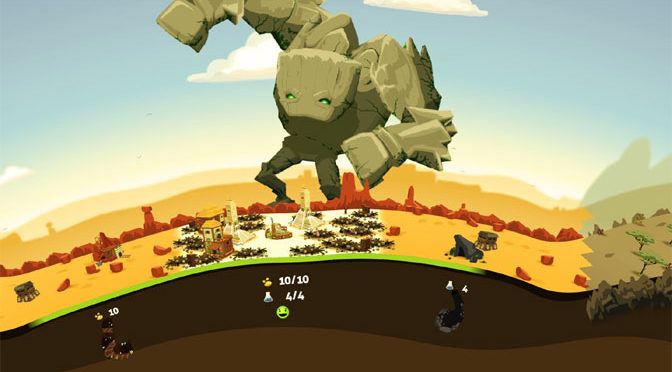 Hey all. I’m back with a God Simulator for my latest game review! It’s Reus!

Plot: You as the player are a planet with four elemental giants that can terraform and create life and your goal is to create and sustain life on your surface.

Gameplay: The gameplay is okay, it reminds of that old flash/mobile game Alchemy where you try to mix and match combinations of different elements in order to make new things. Unfortunately for Reus, and Alchemy for that matter, there isn’t much of a goal beyond trying to make new things.

Trying to improve things for any creatures you manage to get to live on your surface is great fun for a short amount of time, but it doesn’t have any lasting draw for most people. I’m sure there are some creative people out there or puzzle lovers that will spend hours playing Reus to create more and more things, but it sadly just doesn’t hold my attention enough for me to give it any score better than what I gave it.

Artwork: The art is pretty much all 2D, which was a smart move on the developers part. For a game that won’t hold the average player’s attention for more than an hour or two at the most, they chose to instead focus on what little gameplay they had and used 2D graphics for the game.

That isn’t to say that the art is bad, in point of fact if I were to cover this game in one of my Retro Game Friday columns in the future it would be a praiseworthy choice. 2D artwork has a much more timeless quality than 3D artwork as 3D art is always evolving, while great 2D artwork can be appreciated always.

[amazon asin=B01KGH7YBY&text=Want to build them up or smash them down? Grab Reus from Amazon.]

Music: The music is okay, but nothing spectacular either. It’s just mediocre, and really didn’t grab my attention at all.

Overall: On the PC, Reus is available through the Steam service for just $9, which seems right. But for the price tag you’ll pay for a console version, I think most people will be better off spending their money elsewhere.

For those who like: God Games, Simulators, Puzzles, Great Artwork.

Not for those who don’t like: Any of the above, or shallow gameplay.