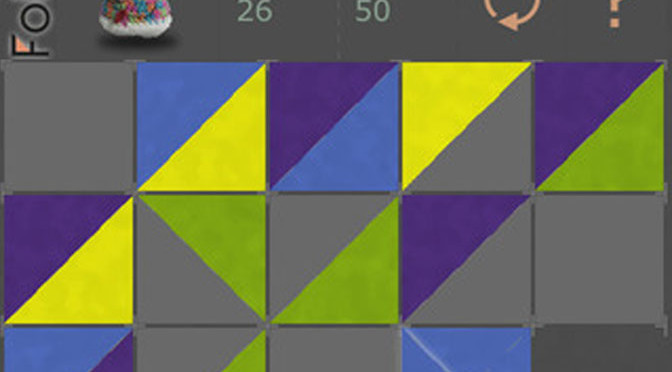 Folds is a deceptively simple new game app for iOS. Roman Jahn, the developer, has managed to create of one of those compelling games, the kind you play late at night, telling yourself you’ll go to bed after the next level, and then ten levels later, you’re bleary-eyed and wondering where the time went.

Folds is basically exactly what it sounds like. You tap images of square paper divided into two triangles. When you tap two triangles that are the same color in the same square they fold into one triangle. If it’s the last square of that color on the board, they disappear. Simple, right? Not so fast, you have to look ahead to make sure what triangles of that color are left on the board and what their orientation is. Screw up and fold the wrong way and you lose the level.

The game has a tutorial but it’s very simple, so simple as to not be entirely helpful. I had to watch the tutorial, play the game, lose several times, and then watch the tutorial again before I sorted out what I was supposed to be doing. Once I got the hang of it, I cruised through the levels pretty quickly. Then when I reached the higher levels the rules changed and now folding the triangles turned them opposite of the orientation they had been. Now, I have to look ahead and turn the figures in my head to make sure I’m getting everything right. It’s very compelling. I’m honestly not sure why.

One of the things I like best about this game is there doesn’t appear to be any sound. This is fantastic because it allows you to play anywhere without having to quickly change your sound settings. Frankly, I generally turn the sound off on game apps anyway. It’s usually repetitive and annoying, so it was nice not to have to bother. I also really like the little crocheted characters that explain the game in the tutorial and signify which player is playing. You can choose from six different adorable little characters so families can have up to six different scores in the game center.

Is Folds perfect? No. I have run across the occasional glitch when a triangle didn’t want to move to a place it should have been able to move, but it’s never frozen the game and I’ve always been able to find a work around. The graphics, aside from the cute little crochet characters, are not brilliant. There is the occasional line that is off by a pixel, but once again, it doesn’t affect game play and kind of adds to the homemade feel of the app. Despite its minor imperfections, I can’t stop playing it.

Are you playing Folds? If not, you should be. Let me know what you think in the comments below.