Aces of the Luftwaffe Squadron

World War II has been rich fodder for game developers for decades. Whether the setting be a time piece attempting to faithfully recreate the era, an alternative history like Wolfenstein, or the more absurd Nazi zombies from Call of Duty, there’s no shortage of villainous Germans to take down in the gaming world.

When Treyarch introduced the zombified version of everyone’s favorite video game enemy, I thought the well had finally run dry on fighting crazed Germans. Then I fought a murderous Nazi professor in a flying train, and I had to rethink what I thought I knew. 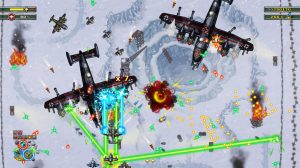 Aces of the Luftwaffe Squadron is the game to end all World War II games. A vertical-scrolling shooter, Aces sees you commanding four pilots tasked with defending the United States from a Nazi invasion — a Nazi invasion consisting of UFOs with lasers, the aforementioned flying train (with flamethrowers) and a host of other utterly ridiculous weapons.

And that’s precisely what makes the game so much fun. The bullet hell genre is full of random insanity by its very nature, and Aces of the Luftwaffe Squadron embraces that in all its electrical-arcing, nuclear-blasting, bullet-flying glory. The game is a bombastic thrill ride of color, reflexes and light strategy that had me twitching my thumbs and laughing in sporadic fits.

Players command not one but four aircraft during missions, with each pilot and plane offering different skills and quirks. Your lead plane and pilot are the only ones that count in terms of mission success and failure, so you won’t lose lives for NPC planes being destroyed. If any of your wingmen does happen to go down, they’ll reappear after 30 seconds.

Still, keeping them alive is to your benefit because of the skills each brings. For instance, one pilot has a skill tree that repairs damage intermittently, while others offer an increase in damage to the entire squad. Those benefits disappear during a pilot’s downtime. Additionally, all planes fire in unison, so missing any piece of your four-part squadron reduces your firepower. 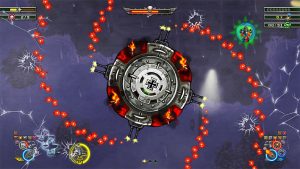 The way players handle that firepower brings a unique twist to Aces. Instead of simply holding down the firing button like many vertical-scrolling arcade games, Aces’ upgrade system limits how much of a special ammo you have. Every time you snag an upgrade, it enhances your firepower by one stage. Running out of that ammunition will revert your arsenal one level, but picking up another boost while your current one is active will enhance your weaponry further.

The system doesn’t necessarily create a need to manage ammo, but it does force you to keep alert for every upgrade that appears since they all become precious commodities. Missing a floating upgrade can be the difference between winning a boss fight and seeing your squadron burst into flames. 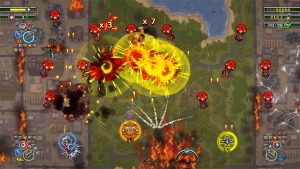 It’s not just enemies you’ll worry about, though. In one of the most entertaining twists I’ve seen in the genre, every pilot has some kind of inherent flaw. One pilot, Mark, is prone to motion sickness, which makes moving quickly damage your health. Moving slowly makes the effect go away more quickly, but with hundreds of projectiles flying at you, it’s also a great way to get killed.

Johnny, a caricature of a cowboy, is prone to fits of blind rage when he sees Germans, causing him to break formation and careen across the stage, destroying friend and foe alike. Melissa is a pilot with altitude sickness, so she’ll fly away, and Steve has narcolepsy, so he’ll fall asleep and drift helplessly, leaving you to defend him until he wakes up. Fortunately, these quirks are all pre-scripted events that happen in certain levels, and while they may be a nuisance at first, they’re also highly entertaining. 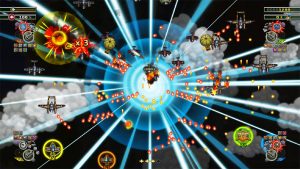 After destroying a set number of enemies, completing levels, uncovering secrets and finishing side missions, you’ll unlock skill points that can be used to upgrade whichever pilots’ skills you see fit. Defeating bosses also offers a chance at unlocking a new plane, and trying out different combinations of skills and aircraft adds small layer of depth.

Depth isn’t necessarily important when it comes to shredding swathes of Nazi war machines into piles of flaming scrap metal, though. What is important is that it looks cool, and Aces checks that box with a flourish. Colors pop off the screen, and each outlandish weapon looks better than the last. Electrical pulses, jets of flame, homing missiles and giant bombs whiz around the environment in a frenetic mayhem. 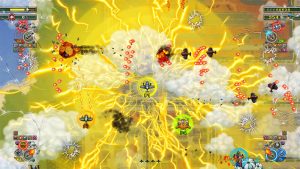 The audio does its job creating the feeling of munitions blazing everywhere, but it doesn’t do quite as good a job with the characters. Whether intentional or not, all of the Americans have German accents. This is equal parts unfortunate and hilarious, and it’s particularly noticeable with the cowboy pilot Johnny.

The more American a character is supposed to sound, the heavier the German accent seems to be. What’s even funnier, the Germans sound, for lack of a better term, ultra-German. The voice acting is so over the top that it takes on an eccentric charm of its own, and even if unintentional. it strikes the perfect tone. 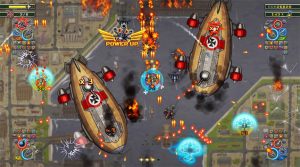 Aces of the Luftwaffe Squadron is outrageous in its presentation and overall premise, and that’s a good thing. It’s a ton of fun to pick up and play, and with local co-op, the possibilities for frantic action are limited only by your imagination.

Aces of the Luftwaffe Squadron earns its wings with a score of 4 GiN Gems out of 5.