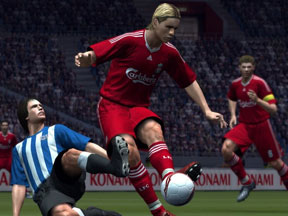 If you’re at all familiar with soccer and like to play video games, you’ve undoubtedly heard about the Pro Evolution Soccer/FIFA rivalry. For years, Pro Evolution Soccer has dominated the genre, with incredible gameplay and innovative editing tools. Last year saw, for the first time, FIFA begin to take steps that could possibly dethrone the king of soccer games. Fortunately for fans of PES, things seem to be on the upswing.

It’s no secret that the last two installments of PES were lackluster at best. Control was clunky and the game moved faster than any soccer game should. PES 2009 addresses some of the problems that the previous games had by using heavier ball physics, making the game feel more like the real thing. Players also no longer seem like they have legs made of steel, since the ball now travels at a normal pace instead of looking like it was fired out of a cannon.

Another change that was made to the game are the way passes are played. In previous PES games, a through ball (lead pass) would be played in the general direction of a player, even if he wasn’t running into space. Now, through balls are played more intelligently, with passes being played to where there is open space, even if the intended player isn’t already going that way. The result is a more life-like, rewarding experience.

The system is not without its faults, though. Through balls will be played into space even if your nearest player is nowhere near the area, making for a cheap giveaway. There are also times when the passes are played too far in front of a player, resulting in an easy interception for the defender. These problems become increasingly annoying on higher difficulties, since the A.I. is designed to play well as a team.

Playing well as a team is not the A.I.’s only strength. Individual players are used to making an impact in a game better than they have been in previous games. For example, in PES 2007, Steven Gerrard was just as likely to appear in a defensive midfield role as he was to be in an attacking position. (Steven Gerrard is an attacking midfield player.) In PES 2009, the A.I. puts Gerrard in his proper place, making him more effective and presenting a great challenge to the player.

Unfortunately, even though many steps have been taken to improve the game, there are still some problems that are lingering from older versions of PES. The most noticeable flaw is player movement. Players make jagged, sharp turns when changing direction. Because of this, players look like they move based on a last generation sports game, instead of looking like a next generation evolution.

Another problem is poor pass selection by the computer. You may see someone in yards of space at the top of your screen, and press the button to pass it to him. But in many cases, your pass goes to someone else in the general vicinity who wasn’t open. This gets extremely frustrating when playing good teams, where every pass and movement counts.

Oddly, while the gameplay of PES can be weak at times, the overall look of the game has been upgraded tremendously, something the series isn’t usually noted for.

Players look more like their real-life counterparts than ever before, and the game does an excellent job at replicating each player’s individual characteristics. For example, Cristiano Ronaldo lines up a free kick in PES just like he would in real life, with the same stance and run-up. Likewise, players have their own running style and dribbling styles. While these aren’t new features to the PES franchise, for the first time in the series they actually look authentic.

The graphical improvements are excellent, but as any fan of PES knows, the sound department could usually use a bit of work. PES 2009 isn’t as bad as other versions have been, but that being said, I turned the in-game commentary off because it was unbearably annoying. The background music isn’t as terrible this time around at least. However, because it’s being compared to the atrocious techno/pop compilations of previous games, the music could only get better.

In all, PES 2009 is a great soccer game with some minor, albeit, annoying flaws. While I’m a huge fan of the series, I can’t deny that FIFA 2009 is worth a look at before buying PES 2009. Both games are excellent this year, and PES is going to have to step it up to stay number one in the ratings. Pro Evolution Soccer 2009 gets 4 GiN Gems out of 5 for starting to make some necessary improvements.