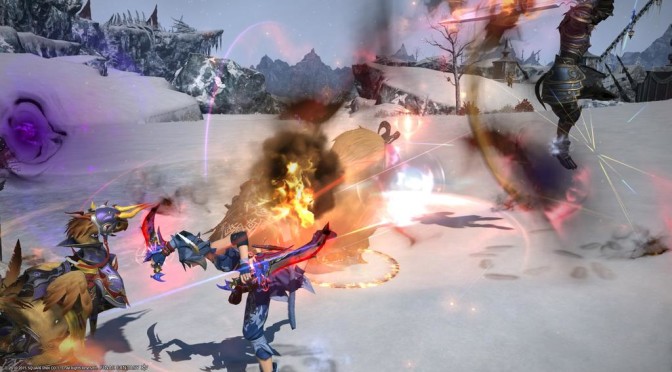 I’ve been playing Final Fantasy XIV: A Realm Reborn for a few months and while I’d gotten to the level cap and gained some of the best items in the game for my preferred class/job of Ninja I still had barely touched the surface of the game. So when Early Access opened up this past Friday for the next expansion, Heavensward, I’d been prepared to experience the new content but still knew I’d be going back to experience stuff I’d missed in A Realm Reborn. I don’t mind that as Square Enix has made it easier to complete lower level content, a feature I’m immensely happy for.

But that has nothing to do with Heavensward, not really at least. Heavensward is a natural evolution of the game I’ve come to love over the past few months, with massively bigger areas to explore, of which I’ve only explored two and a half so far. Not only did they open up the world in ways I’d never have thought possible for this game, but they did it with the smoothest “launch” of any game I’ve ever played. I experienced only minor queues into my server and I haven’t been kicked or experienced lag once. Not even when me and about 300 other players on my server went to participate in one of the new Major Boss FATEs like Odin and Behemoth in ARR.

The game’s environments, which I’ve barely touched, are amazing and beautiful in ways that make my past experience with World of Warcraft look like I was playing in a child’s game. I’ve seen and experienced the majesty of Ishgard and Dravania in ways that have made my jaw drop when I took the time to look around.

Speaking of exploration, it’s a very necessary step in unlocking flight with your personal mounts in the new areas. You are required to gain five Aether Currents via questing, some main story quests and other’s side quests. You also need to find ten out in the world, with nothing but a compass and your own wits to find and get to in order to attune yourself with them.

Flight is a very welcome addition to this game, and with the incredibly massive areas in both the planar and multi-dimensional aspects it’s the fastest way to get around. Having to earn it irks many players, but doing it this way avoids the problem that World of Warcraft had for years after The Burning Crusade. The problem was that player’s would just skip all extra content and just dive bomb onto the things they needed for quests than take off, while avoiding 99% of the enemies.

Getting to the story portion of this review, as any frequent readers of my columns will know I abhor spoilers, so I won’t get into any of it except vaguely. The story in Heavensward is amazing and takes place shortly after the cliffhanger ending of the ARR story. It’s an amazing continuation of both left over plot threads and new ones that has made me laugh, cry, and rage. I personally love story, so when I experienced ARR’s story I was happily surprised to see how amazing it was. They even make fun of the fact that I end up being people’s errand boy/girl.

To cut a long review short, if you have the money to play ARR and Heavensward you should as it’s one of the best Final Fantasy and MMORPG experiences I’ve ever had.

2 thoughts on “Final Fantasy XIV: Heavensward is an Excellent Expansion”