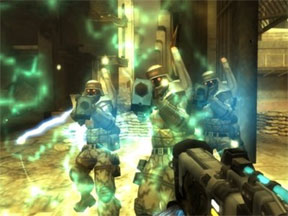 First person shooters have established quite a presence in the gaming world within the last year. Perhaps it’s the high that’s still in the air from dynasty games like "Halo" or Metroid Prime."

At any rate if you take a look around first-person shooters are slowly beginning to line the shelves in force at your local gaming stores. Games like "Killzone", "Unreal Tournament", "Rogue Agent", "Call to Duty", "Medal of Honor" and "Doom 3" have all made significant impacts within the gaming community in recent months. The time seems to be ripe for FPS games and set to make another significant impact in the world of gaming is a first-person shooter by Eidos and Crystal Dynamics.

The year is 2065 and the place is Hong Kong. A military regime known only as "The Republic" has caused a divided nation to plunge into a civil war. This civil war spreads like wildfire and quickly escalates into global chaos.

You are Nathan Frost, 2nd Lieutenant in a Liberation Coalition Army, known to the world as "The Peacekeepers." Sent in to neutralize this civil war and thereby put an end to all the global chaos, the Peacekeepers are the world’s last hope for peace again.

Lt. Frost’s first day in the hot zone is one he won’t soon forget. After all it’s not everyday you die and get a chance to talk about it later. Nathan finds himself caught up in the nasty searing blast of an air bomb trying to save one his fallen comrades. The only thing he remembers after that is an excruciating gurney ride into the surgery unit, wondering if he still had a face left, and some strange talk about BP, pulse and scarecrows.

Later on, he finds himself alert, standing, disoriented a little, but stronger than before. A sense of extreme power is coursing through him and he sees the apprehension in the eyes of all who pass by him. He soon discovers that he’s been transformed into a prototype. He is the first-born in a top secret program to create a bio-augmented super-soldier. A top secret program entitled, "Project: Snowblind."

Nathan learns he’s been hard-wired with specialized bio-augmentations. These augmentations grant him superior skills with firearms and explosives as well as lethal combat skills never seen before on the battlefield. He’s the perfect soldier, almost.

There is a tactical downside. Frost is vulnerable to EMP or "Electro Magnetic Pulse." EMP can make short work of his onboard electronics and render him momentarily or permanently helpless. When his bio-augmentations begin to fail Nathan becomes "snowblind" until his systems recover. All things considered though, he’s in best shape of his new cybernetic life. Now that joke about a one man army is actually true.

Hong Kong is in shambles. A near perfect depiction of "civil war" should it happen in a neighborhood near you. Abandoned cars left out on the street curbs, overturned military vehicles, and half-crumbled remnants of what used to be city buildings help to create the perfect battleground. There’s so much clutter around you feel like you’re constantly closed in and the only way out once your feet hit the ground off the chopper is to fight your way out to your next safe point or kill everything standing in your way. Which ever comes first.

Firefights are insanely intense and extremely realistic. When the Republic and Peacekeepers mix it up all hell breaks loose. Weapon traces fly from so many areas you don’t know whether to fire back or keep your head down and see what happens next. Large explosions are constantly going on around you and enemies are randomly popping out from hidden hide-outs or from around corners to take quick pop-shots at you. Heavy artillery tanks and "sentry bots" storm the streets taking out whatever moves and still has a pulse. The term "Guerilla Warfare" has been taken to a whole new level in this God forsaken place.

Fortunately for Nathan, he has all the right hardware to see that the job gets done. There are 3 basic primary weapons he’ll usually have at the start of every mission. The "pistol" is a silent close-ranged weapon perfect for those mini stealth jobs. The "Carbine 240" is your standard military issue automatic rifle. This gun will get you out of some serious jams as it’s highly effective during firefights and when you wanna make it up-close and personal the "shotgun" is the lethal weapon of choice for those close combat situations. As you progress through battles you’ll find more devastating weapons to help turn the tide of battle.

Also at Frost’s disposal is a small arsenal of secondary weapons mostly consisting of a list of different grenade types. The "frag" is a good anti-personnel weapon for enemies in a cluster as it sends metal fragments in every direction upon explosion. The "EMP" uses electro-magnetic pulse to damage or disable electronic circuitry. These kind of grenades are effective against sentry robots, auto turrets or to disable shield units carried by soldiers. "Flash bang" stun grenades explode with blinding light and concussion. They’re non-lethal but good for either getting you out of tight spots or giving you a small window of tactical advantage during battle. Gas grenades unleash a lethal cloud of poisonous gas perfect for when you want to watch them die slow.

The coolest secondary weapon of all though is the miniature "spiderbot." You can deploy one of these creepy crawlers to systematically track down and open fire on enemy forces. You can even deploy multiple bots to watch your back or even the odds during a firefight.

Nathan also has a special set of non-weapon tools he can depend upon when the job calls for it. The "kinetic kicker" is used to push or pull objects and to collect ammo or other various collectible items. He can use the "icepick" to hack into several types of electronic equipment to disable gun turrets or open important doors and the "riot wall" is a throwable device that unfolds into a temporary force field that can be used anywhere on the battle field. The "nana boost" is a vital device that will completely heal Nathan, recharge his bio-energy, and reverse the "Snowblind" effect. It’s the kind of device you never leave home without.

Nathan’s bio-augmentations make him the ultimate super-soldier. Among his super attributes are "enhanced vision" which causes all enemies and cloaked mines to stand out from their environments as well as make dark areas brighter for navigation and give him the ability to see through walls. He can also "cloak" himself and walk within inches of the enemy without any type of detection. During battle he can discharge a fatal high-voltage "electrical jolt" directly in front of him to dispense enemies quickly and effectively and if he finds himself pinned down in a crossfire, he can create a "ballistic shield" around himself to temporarily absorb damage from attacks.

When the situation gets hot and heavy Frost can activate his "reflex boost" to slow down the perception of time in a "Matrix-like" style allowing him a chance to react more quickly to enemy actions. Besides his arsenal of high-powered weapons and special bio-augmentations Nathan can heroically take over turrets and other various military vehicles to deliver his men from clear and present danger or help turn the tide of battle.

Besides a healthy single player mode, one should consider it mandatory to explore the multiplayer modes of this game. The fun and action is non-stop as you can find yourself engrossed in multiplayer mayhem for hours at a time. Trust me, when you’re not playing Halo 2 online you ought to be playing this one with your frag buddies.

The bottom line is that Project:Snowblind is a very solid well-balanced game all around the board. It combines and intensifies various addictive ingredients from other hot games of this genre making it the kind of game that consistently keeps you coming back for more action. This is definitely one to add to the probably already extensive list of first-person shooters in your gaming libraries. An admirable performance earns this game a worthy 4 Gin Gems.