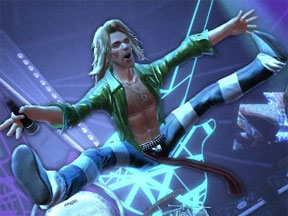 Another Guitar Hero title is offered up to the masses featuring 28 Van Halen tracks and 19 guests chosen by the band. This one however did not keep up to the standards I expected from a Guitar Hero title. Mostly this is because the new features brought to us in Guitar Hero 5 are absent.

For whatever reason, there is no party play, dropping out or in, and changing difficulty on the fly. The music studio, Head to Head, Xbox Live multiplayer and Rock star creator are all still there, but forget playing any of your DLC with this version. And there is no option to pay a little and port some songs over to Guitar Hero 5 either.

It’s the game disk or nothing. And at full retail price of 59.99, I hope you got in on the Van Halen for free deal when you pre-ordered and purchased GH 5.

Enough of the bad, let me talk about what is good — and that’s the music. I’m one that applauded the decision by the band to include David Lee Roth back into the band and into the game. The music is really the driving force of the rhythm based games and the 28 Van Halen tracks made playing this game fun.

Eddie Van Halen is a guitar icon and for all the guitar controller rockers out there, you will find a challenge in his solo’s for instance "Erupion." This track makes great use of those "tap tap" notes that my co-host on The Gamer Geeks show abhors. The idea with these notes on a rope it to make use of the GH touch pad. I’m still trying to perfect this change over. Oh well, practice makes perfect.

I’m a personal fan of the GH drums and this game reminds me of why. Rocking drum beats in songs like "Panama" and "Hot for Teacher" really envelops you into the game. You will get to see the band, who you play as for all of their songs, go back to the 80’s in their appearance and style. Your custom character is used for all the guest acts, which include such names as Queen, Alter Bridge, and Deep Purple.

The graphics are just ok, not particularly great, but they are also a throwback to the older GH titles. I get the feel that this title was rushed, which is a shame because Van Halen wrote some iconic songs from my younger years. I searched the extras for "making of" videos like ones present on Metallica where you get to see Kurt being owned by his own song, but none are present. You do unlock song extras for viewing the song with fun facts and one for the lyrics.

Speaking of lyrics, you may know by now that I love to sing. This time, it was not so. I rather shocked my husband when I chose to play guitar/bass or drum. I did try to sing on GH Van Halen but found it rather frustrating that my voice was not registering. I tried switching from my wireless mic to a headset and found some improvement and then tried the corded mic, which worked the best. Take note, I did change the batteries in the wireless mic before switching. I also noticed the volume adjustments using the left bumper and trigger is not available while using the wireless mic. This was not a game where I sang as the vocalist, but my husband and friends did hear me sing the songs while I was playing other instruments. They also witness the odd vocal recognition of the game so I know it was not just I having an off night.

The songs are difficult to sing, just listen to "Running with the Devil" and David Lee Roth’s piercing squeal to understand. I do however love a challenge. If you do too, then you’ll love trying to beat this one on vocals.

I would recommend this game to Van Halen fans without question. The song list, though short, will bring back memories as well as adding a challenge to you, whether you’re a guitar fan or a drummer. Just singers beware: you may find technical problems in your way. I do hope a patch can correct any issues if they are affecting everyone.