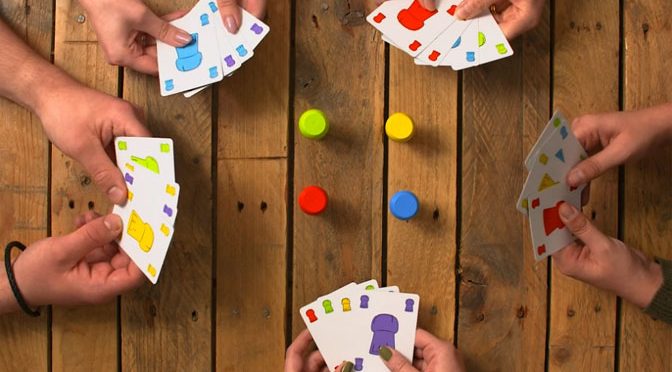 Corks is a fast-paced, fun new game from the folks at Ginger Fox. What’s it like? It’s silly in the best way. Imagine if musical chairs were a card like Spit only played with up to fourteen people. Sound confusing? It’s not. The game takes about two minutes to learn and only a few minutes to play, making it perfect as a pre-game for a larger game night, or since it’s so easy to learn, it’s a great multi-generational game for family gatherings. 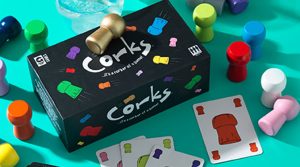 Game play is simple. In the center of the table, put out one fewer corks than you have players. Take only the cards that match the colors of the corks on the table and shuffle them and deal them equally to the players. Players discard and collect cards until someone has four matching, that person grabs a cork and then everyone else scrambles for the rest ala musical chairs. 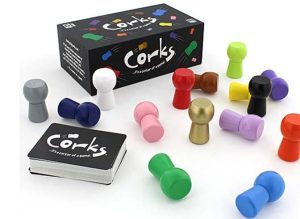 This results in a lot of laughing (or I suppose in some groups, fist fights). Play continues as before just removing the colors of the eliminated player. Until it all comes down to two players fighting for the golden cork (always the last one the table and the only color cork required to be in the game.) There are variations to change it up but none of those are complicated and they’re all pretty fun for something quick and easy.

The components are really well made. The cards are thick stock and feel like they’ll last through lots of play and the corks are a hard, heavy plastic. 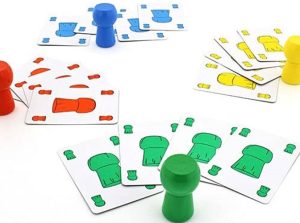 There aren’t a lot of card/board games that will accommodate up to fourteen players so Corks gets high points for being one of the few games that could theoretically handle an entire family gathering or a whole game night group. The game is rated for ages six and up which makes it pretty much all ages as far as games go. If your kids can manipulate cards and grab stuff, they can play this game no matter how old they are. 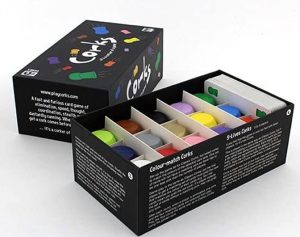 This is an undeniably a fun game but it’s not a quiet game or a thoughtful game, so don’t take it to a restaurant to keep the kids busy unless the restaurant is Chuck E. Cheese. If your game night is feeling a little flat or not everyone knows each other too well, Corks is a good ice breaker because it’s such silly fun. Check it out and let us know what you think in the comments below.