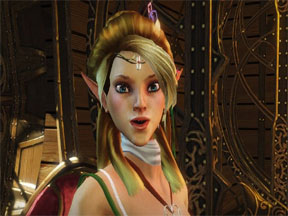 And there are dragons too, just for extra spice

I remember when I posted the original news story about Divinity: Divinity Dragon Commander. I read through the concept and it sounded interesting. Most strategy games allow little or no control over the common affairs within a country. This is doubly true for fantasy settings. In fact, if you get any government management type tasks, they are usually a small series of issues that are easy to decide. So the baseline for Dragon Commander was mixed for me early on.

Once I started a new game, it went through the opening movie, which was actually nicely done. You are the bastard son, born half human and dragon, of a king who died. Now all of your relatives are fighting for the throne. When the actual gameplay started I was given an introduction by a wizard. He walked me through the basics. It’s nice that this game has a tutorial because there is a lot going on.

The next step for me was to meet my two generals. To my surprise, both of them hated me and they were reluctant to help. So once I notched a few wins under my belt, they respected me a lot more. Each one has a unique personality that combated with the other generals. Also, I noticed each one represented a trademark type of person. You have extreme feminism, rebellious, intellectual, and a drunk glory seeker. Having to improve your relationship with your generals is just one small part of the game. The choices you make in the political arena affects their attitude towards you, though for the most part, you at least know where they stand.

Upon getting acclimated with my generals I went to the map screen. Let me tell you, this game does you absolutely no favors. Your capital city is bordering enemy territory and on turn two the enemy will throw everything they have at you. On Divinity, when you lose your capital you have one turn to get it back or the game is over. Oh and they take all of your money. This game has beat me on numerous occasions.

On top of the tough military area, there is a just as intense political section. You have five councilors from five different races. Each one has a clashing personally and widely different beliefs. Each issue has effects on not only your military campaign, but popularity as well. And don’t forget that your generals are watching you every move too.

Most issues with political games I’ve played are clearly fictional issues and don’t require much thinking. But every issue in Divinity mirrors a real life issue. The draft, gay marriage, medical hallucinogenic herbs and government healthcare are just some of the tough choices you will have to make, among many others. There have been moments in the game when I spent five or ten minutes weighing a choice because of the potential impacts. Here too, the councilors will give you their input, and they are all skilled and have very good reasons for their completely different positions. Depending on what you choose, the various races in your realm may like you more or less, and may be more or less inclined to help you when you need it.

One extra thing that is thrown at you is the selection of a wife. Each of the councilors brings a (more or less) suitable girl from their homeland. Marrying a girl from one race will strengthen your ties to those people. But each bride also has a whole host of advantages and flaws that they bring to the table. Besides commenting on issues facing the kingdom, they each have their own problems that you will need to work out. As an example, the undead bride, who is nothing more than a skeleton, begins to want to feel more alive, and there are a bunch of somewhat gruesome ways, plus some other options on how to make this happen. But doing so may anger her people, who would rather she remain closer to the ideal undead citizen, something they believe with almost religious zealotry. Hers is likely the most extreme choices, but all the potential queens are a minefield of problems along with some really great advantages, all of which can change depending on your choices.

When you actually get to leave the lawmaking and courting area and fight, you will find a truly unique combat engine. It turns into a real time strategy game with the ability to turn into a dragon midway through battle. This is the ultimate way to turn the tide of battle. From the sky you can blast fireballs at your enemies and help your troops survive another day. It’s good to be a dragon sometimes. The battles themselves are very difficult, with lots of forces arrayed against you. The AI is pretty smart and will sometimes surprise you with rear guard actions and attacks you did not expect. Sometimes turning into a dragon is the only thing that can turn the tide during a very close battle.

If you don’t want to run the fight yourself, you can let one of your generals do it for you. But be warned, each general has skills that need to be employed properly. And this is modified by how well they like you and how happy they are. At least you get to see a percentage chance of victory with each general before the battle. You can even influence this by committing different armies and powers to the field. But it’s never going to be sure victory no matter what you do, unless you take over the battle yourself. Even then, you are in for a real fight.

Everything is intertwined too, which makes Divinity Dragon Commander so amazing, and also so frustrating. Decisions you make might give you bigger recruitment and thus bigger armies, but if you piss off one group of people too much you may find them lacking in their support for you. Depending on what you do, you can also improve your armies through research and technology upgrades, but everything is helped or hindered by the political decisions you make, so it’s a realistic part of the game for sure. Neglect any one area, and you will be hurting overall.

The graphics in Divinity Dragon Commander are marvelous. Each character is well drawn and looks very realistic, as does the interiors of your flying flagship. This is a fantasy realm and the artistic touches give it its own style that is unique to the realm.

The sound was quite good, and special props have to be given to the voice actors. They are without a doubt some of the best in a game. And they say a lot of dialog. Every character has their own attitude, and a voice that fits them. Some of them would cause me to cringe when they wanted to speak with me, but mostly because I knew it wasn’t going to be a pleasant conversation. They were almost like real people that way.

Taken as a complete package, Divinity Dragon Commander is one of the best titles I’ve ever played. There is really something for everyone here. For example, a skilled political operator might be able to use their silver tongue to keep things rolling along and let the generals handle the battles, even though they will run into situations where there are no totally good choices. A well-rounded player will probably get the most out of this one, though it will be a hard road no matter what. That’s not a bad thing, but be ready to be sorely challenged.

If you want a fun game that will take all of your skill to master, try Divinity Dragon Commander. I give this a perfect 5 GiN Gems.