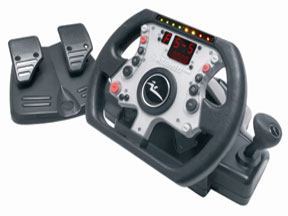 Usually I don’t use steering wheels in my games. Whenever I am playing a dedicated racing sim like Gran Turismo 4 or an easier to play arcade racer like Burnout 3, I am used to racing with a DualShock 2 joystick. It normally takes me a while to get accustomed to a steering wheel and that adjustment takes too long that I end up going back to my DualShock.

At the same time, the US racing community might not be very familiar with Formula 1. With the rising popularity of NASCAR, and recent events such as the Indianapolis debacle (where seven racing teams refused to race due to tire issues, resulting in a six car racing field), Formula 1’s popularity is almost equal to that of curling.

UK developer Joytech is doing its best to change my opinion of steering wheels. Now as a member of Take 2 Games, Joytech is releasing their Williams F1 Team Racing Force Feedback Wheel to the United States. As an exact replica of the BMW FW23 racing wheel used by Juan Pablo Montoya, it will feel quite at home for anyone familiar with the Williams F1 racing team.

Not only is the design quite impressive, the wheel is also easy to operate. Whether it is used on a tabletop or as a laptop (via two leg supports), the wheel is quite comfortable to use. Force feedback is provided by three air-cooled motors, and the result is unbelievable. Feedback can be set to four levels, as well as the steering sensitivity (ranging from that of a race car all the way to that of a buggy or truck). The best thing about the wheel is when a game doesn’t support force feedback, it will revert back to Dual Shock mode rather than not functioning at all.

On the wheel itself there are several displays. The main display lists the sensitivity and feedback settings, as well as a special timer that can be used to determine lap times whenever a game does not have a timer. The secondary display to the left shows which type of racing mode is supported: force, analog, and digital. Lastly on the top there is a line of dots that light up more as the accelerator pedal is pressed down.

Everything on this product speaks out quality.

If there might be any concerns about this wheel, it might be that Joytech is selling a Formula 1 related product to a country whose main interest in racing consists of NASCAR. But for those who can think past that stereotype, the Williams F1 Team Force Feedback Racing Wheel is well worth an investment. While a little pricey at about $90, it is a great alternative to other force feedback racing wheels currently on the PlayStation 2 market. If this is the first attempt that Joytech has in releasing peripherals to the United States, I am curious to see what else they have to come out with.