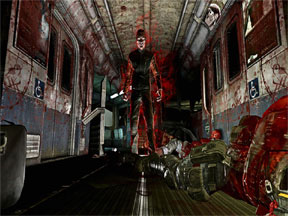 Being a die hard F.E.A.R. fan from the beginning, I was optimistic about the third installment to the series. Even after two great games, most people still have not played anything from this series. I took a chance and told people that this game would be a sleeper hit, but no one listened to me.

F.E.A.R. 3 found the balance between horror and shooting that I love to see. One innovation I was happy have was the newly introduced cover system. First person cover system games are rare, often because the controls are sluggish. F.E.A.R. 3 set their cover system to be quick, crisp and responsive. I was bouncing in and out of cover with only a few clicks of a button.

Another thing I liked was how they toned down the need for slow motion. Minus the paranormal creatures that are always a huge problem, you can handle most threats with good aim and quick reflexes. A unique level up system was also implemented that will let you build out your character to fit your personal style of combat.

The story follows Point Man and his ever restless brother Paxton Fettel. For those who haven’t played the first game, Point Man had to hunt down Fettel in a vain attempt to stop the city from circling the drain. With Fettel reappearing in the story, an interesting new cooperative mode was created. At the end of the first campaign you place a bullet in Fettel’s head. I started out in a prison after Point Man was beat severely by the guards. Before the beating could continue, Fettel’s spirt causes a massive display of gore.

After a little cut scene I was sneaking through a hallway with a knife. I spent a few moments just enjoying the great graphics and smoother game play. After two or so hallways I had my first enemy encounter. I snuck up on a guard and knifed him in the back. Upon picking up his pistol I was blown away with the realistic aiming of the weapon.

Shortly thereafter I got in my first real firefight. Deciding to take the Rambo approach I kicked the door open and ran in guns blazing. Using a pillar as cover I picked off guard after guard. Everything going on was a real as it could possibly be.

Throughout the campaign I traveled through well designed levels. From a rural town to a battered old airport. Each map provided plenty of cover and challenges.

There were a few things I had issues with. During some battles there will be one guy hiding and he’ll be shouting for his dead teammates. Normally this guy is so well hidden you’ll have to endure the yelling while you play hide and go seek with him.

Also, while the scare factor has improved from the second game, it still isn’t as freaky as the first. Some more genuine horror elements would have made F.E.A.R. 3 go over the top, but as it stands, this is a great shooter with some horror elements that help to set it apart from the "me too" pack of games out there all trying to be like Call of Duty.

Overall, if you’re a big fan of horror shooters (like me) or just shooting games in general, then you will be pleasantly surprised with the great story and quick gameplay that F.E.A.R. 3 offers. This below-the-radar-shooter gets 4 out of 5 GiN gems from me.