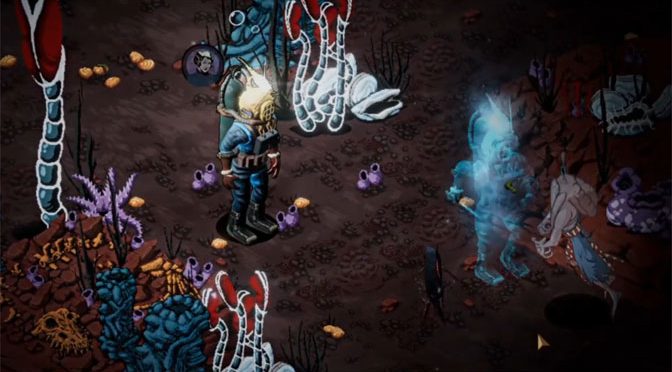 So, it took about a year before my boss trusted me with another Cthulhu game after I was beyond disappointed in Achtung: Cthulhu. I enjoy the Lovecraftian stories as much as the next person, but I feel like people who use Lovecraft as inspiration either try too hard or not enough. What I mean is some developers try to reinvent the wheel and try to build these large, encompassing games with a convoluted storyline or they just seem to say “Old Ones” while talking spooky and moving on. 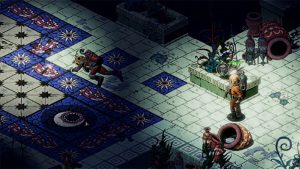 Achtung fell in the second category as it seemed like a generic turn-based strategy with the worst Lovecraft wallpaper glued on. The references felt forced, the story felt forced and overall, it did not feel in line with Lovecraft’s original work.

Stirring Abyss, on the other hand, strikes the medium of tone and background. I knew this game was going to be great from the opening narration alone. It was well acted, well produced and immediately got me interested in what was being portrayed. 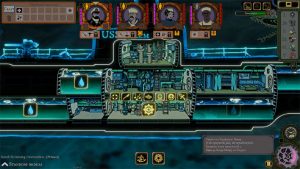 The story follows the submarine crew of the USS Salem (a pretty ironic name given the subject matter) as they explore a part of the deep sea. There is an incident and the sub is damaged very badly, ending up stuck on the ocean floor. Your character wakes up and you work on finding another crew member and getting back to the sub. The sub itself has different compartments that have flooded for you to unlock and develop. This is one of the reasons why this game hits all of the right notes.

The submarine acts as base and resource management as your characters level up, can be mutated and be enhanced with various upgrades. There is also a heal limit between missions and penalty if you use rest by increasing the corruption level. 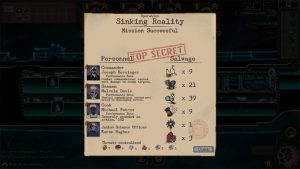 As corruption grows, the enemies become harder and make every mission much more difficult. Resource gathering within missions encourages you to both explore and plan your moves carefully. Your divers have a finite amount of air that can be increased under certain circumstances, this means you can’t move too slow and turtle your way through some missions. I actually like this method compared to the arbitrary time limits on, say, XCOM 2. 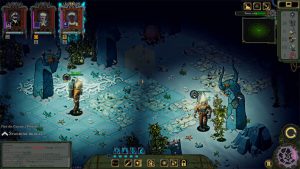 The graphics may not be considered “great” but I think it was done the way it was as an artistic choice and it pulls it off. The cell shaded art featuring a lot of blues and yellows really help set the mood. The music is minimal, same with the sound effects, but equal more than the sum of the parts. I found the music especially great at building up the tenseness of some missions. 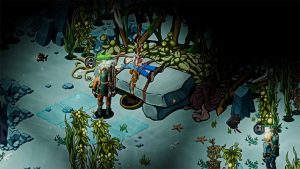 Overall, Stirring Abyss is one of the better turn-based games you can play right now, and this is especially true within the Cthulhu subgenre. Stirring Abyss earns a perfect score for the simple fact I cannot think of anything to knock it on. While I am sure there could be something, if I have to think that hard, then it deserves the score. Anyone looking for a truly remarkable turn-based horror game with heavy (and well-defined) Lovecraft-like elements, should look no further than the Stirring Abyss.