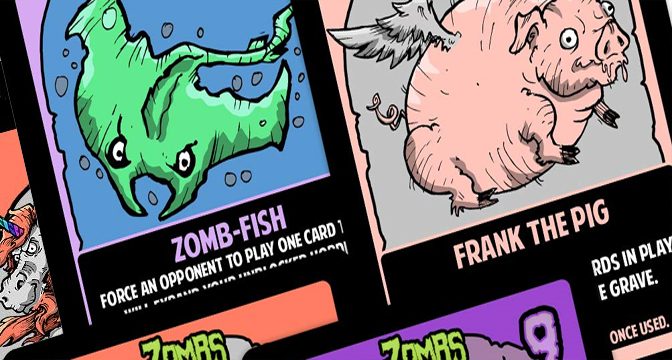 Once in a while, I like to take a little break from video games to go old-school and play a board game or card game. Zombs: A Half-brained Card Game came my way via a friend, and when I finally got my husband to step away from Red Dead Redemption II, we gave it a try.

First off, the artwork on the cards is cartoonish and a little gruesome which suits a game that’s zombie themed. The numbered cards come with characters with amusing names like Ghastly Grace, Toxic Tim, and Severed Sara. 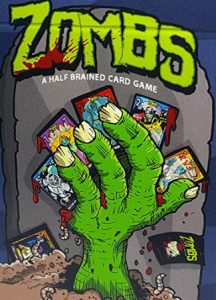 The basic game play is to build your deck in color and numerical order while trying to stop your opponent from doing the same thing using special cards that sabotage what their trying to do. It’s definitely a “gotcha game” like Munchkin where you can be cruising toward a win and then lose everything to the right card coming from your opponent.

Two of the cards, one involving a unicorn and the other involving a pig, can change the game for all players at the same time so knowing when to play what card becomes part of the strategy of the game. Zombs can be played by two or four people, which isn’t that unusual, but the four-player version is played as teams, which makes it cooler than a lot of similar games, sort of like undead Bridge, but not really. 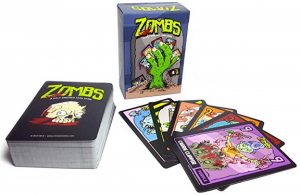 I found the artwork and gameplay to be enjoyable. I liked that the instructions were simple and straight forward and printed on cards like the game, which was nice since I inevitably lose the instruction sheet for card games.

Conveniently, the developers also provide a website with videos that show how to play the game, which is how I learned to play, because it’s easier for me to learn a game if I can see someone else play it first.

[amazon asin=B07HDG5KQ5&text=Don’t be braindead! Pick up Zombs for your next party or gathering from Amazon!] 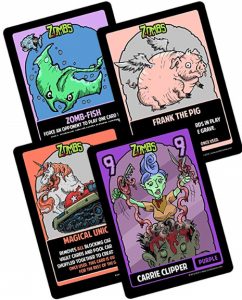 The only thing I didn’t like was how hard it was to open the box. I know that sounds crazy, but seriously, the box was hard to open and get the cards out. As a matter of fact, I still haven’t put the cards back in the box because it was so annoying to get them out. Anyway, that’s a small thing.

If you’re having a Netflix marathon of iZombie or a viewing of World War Z or Zombieland or any of dozens of other zombie tv shows or movies, consider taking a break for a round of Zombs for a change of pace. That could be the slow moaning pace of the undead, but not really because depending on how you play Zombs, it only takes twenty to forty minutes. Check it out.