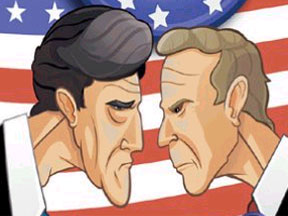 Warning! Do not play this game unless you enjoy politics! If you didn’t get it from the title, this game is all about one of the favored American pastimes-presidential politics. You are the campaign manager for a Presidential candidate and you have 41 weeks to convince the American public your candidate deserves an historic spot among the likes of Millard Fillmore and Chester A. Arthur. Take a stance on controversial issues of the day-the war on terror, public education and abortion. Make speeches, make special appearances on such television shows as "60 Seconds" and "Barry King Live," and drag your opponent’s good name through the mud. Ah, election year.

Pit George W. Bush against John Kerry and see who comes up on top. Or, play other national figures such as Condoleeza Rice, Jimmy Carter, or Bill Clinton. You may select a known politician or build your own candidate. As in real life, each candidate has his or her strengths and weaknesses-personal characteristics such as experience, integrity, intelligence, charisma, military experience, etc., that may help or hinder their campaign.

The campaign trail is grueling, expensive, and unfriendly. And so, your candidate’s three biggest assets are stamina, money, and political capital. Your candidate has a fixed amount of stamina, how much energy he or she has, per turn, to spend on various actions. Novice politicians will likely have less energy than their more experienced counterparts. You’ll start out with a pot of money"it won’t last long, but you’ll be able to build your warchest along the way. Finally, you will have a certain prowess for schmoozing with the bigwigs-your ability to build political capital.

You’ll spend these assets on actions each week, or turn, of the game. Fly yourself, an ally, or political operative to a new location-there are fifty states out there, so get going!

Upgrade campaign headquarters-to raise awareness of your candidate within a state, and to heighten your knowledge of area issues.

Fundraise-to spend money, you’ve got to make money. Make a speech or place a newspaper, radio, or television ad-campaign on issues of importance, and demonstrate your values or your opponent’s lack of values. There are certain "safe" issues that Republicans, Democrats, and Independents support, but others will divide voters along party lines.

Political operatives will help your cause-are you in need of a smear merchant to ruin your opponent’s reputation? A spin doctor to sharpen your image? A Webmaster for some free publicity? Or, perhaps, you need to rub out one of your opponent’s allies (just ask for the Fixer).

Throughout the game, random political events will happen in different states. These could be good or bad, but you won’t know until you get there (first). A Hollywood Star could take a liking to you, and work to increase your awareness. Or the Time Waster might make you lose the rest of your stamina for the turn. Your candidate may be invited to appear on a national news or talk show, on which you’ll have to answer a series of (often) tough questions. You have several answers to pick from, based on your character’s personality.

While slandering opponents, flying around the country, and raising more money is neat, the ultimate goal is to get enough support from states to win the election in November. This requires close attention on state demographics-from number of electoral votes to important issues. When you’ve garnered majority support from a state, it will turn red or blue. Don’t take your supporters for granted. They are fickle-and won’t hesitate to change their minds, especially if you ignore the state for too long or take the wrong stance on too many issues.

The Political Machine is a fairly complex turn-based strategy game, but it’s very easy to get started. The primary interface is a United States map. Your candidate is identified by a person icon dressed in red (if you are playing a Republican) or blue (Democrat). Action items and buttons are clearly labeled. Gameplay is mouse-driven. A weekly summary charts each candidate’s actions for that turn, and a running banner across the top of the screen will announce any newsworthy items from both sides.

Graphics are pleasantly simple-stylized stills of politicians, media figures, and symbols. The only "animation" is the plane that flies your candidate from place to place. Game audio consists of bland synthesized "breaking news" type tunes-it neither adds nor detracts much from the game. (After the first two minutes, you might as well turn off your speakers.)

There are several modes for game play: quick play, campaign plan, fantasy play, and multiplayer campaign. Quick play is a good way to get your feet wet, as most of the game variables are pre-selected for you. To immerse yourself in the game, try the campaign mode. Your candidate will advance through a series of progressively harder races. In fantasy play mode, you can mix things up by randomizing state populations, wealth, issues of interest, and the ratio of Republicans to Democrats. Multiplayer mode was disappointing-the several times I connected to the online game server, there were few other players available.

Priced around $20, The Political Machine is a fun, inexpensive game, perfect in this election year. Roll up your shirt-sleeves, it’s time for battle!