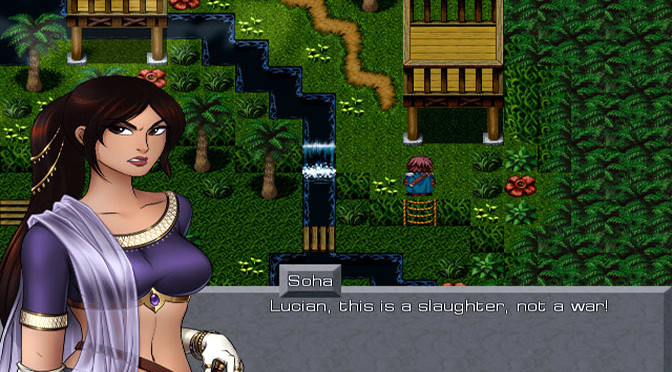 This is a game that may immediately turn some people off. It’s made with RPG Maker and that will leave many gamers, including me, skeptical about it if only for that reason alone. It’s hard to tell what’s good or bad with the huge amount of RPG Maker games that come out, and unfortunately, most of them are bad. However, this isn’t the case with Echoes Of Aetheria.

Echoes Of Aetheria has a story that’s been told a thousand times over. There’s a huge wedding between two nations, a kidnapping takes place and war breaks out. There’s a rebel faction fighting the government and political espionage is all the rage. It’s nothing new, but it’s not really bad either, even with some of its flat dialogue.

The characters of Echoes Of Aetheria also fall into tropes all too common in JRPGs. There’s the strict soldier that loves his country, the sarcastic thief that’s pulled into events without her permission, the unhappy princess from the arranged marriage and more. Yet again, it’s not that these elements are bad, but they are overused and don’t feel as good as they would’ve 20 years ago.

What is fresh and new about Echoes Of Aetheria is its combat system. Players are greeted with a 15-square grid and turn-based combat. Each character takes turns based on their speed and stronger attacks typically take time to charge. Characters can also choose to move around on the grid to better position themselves in battle. This includes putting weaker characters behind stronger ones to keep them from getting hit by enemy attacks.

Characters in Echoes Of Aetheria also all have their own unique skills. These skills are used in combat with TP, which is gained by attacking, taking damage and other interactions in combat. Players can also upgrade these skills with skill points that they will collect throughout the game. Upgrades aren’t permanent, which means that players can power up different skills between battles to best fit their situations. There are also passive skills that can be equipped to characters and offer other benefits in battle.

Battles aren’t random in Echoes Of Aetheria. Instead, players can see enemies on the field before running into them. This can get them benefits in battle depending on how they approach them. For example, running up behind an enemy unnoticed will get the player a Preemptive Strike, which allows them to go first when the battle begins.

Exploring the world of Echoes Of Aetheria is simple. The game has a world map that is navigated with a cursor. This allows players to choose which areas to go to. Most of the areas are just new places for the next chapter of the game. These areas contain chests to open, experience that can be collected from shiny locations, and also as advance the main story. There’s also a main base that can be visited between chapters.

This main base allows the player to stock up on items and talk with other characters to learn more about them. There’s also an anvil that can be used to craft new weapons. The crafting system is a nice addition to the game and isn’t very difficult to jump right in to. It also allows players to create weapons and armor that best fit how they are upgrading character skills.

The art in Echoes Of Aetheria isn’t all that great. It looks standard as all get out and many of the character look like they were pulled from the preset assets that come with the RPG Maker engine. This makes it hard to get emotionally attached to the characters. One really positive note is that the characters have wonderful sprite in battle that are full of movement and feel very alive. Unfortunately, this makes the stone-like enemies stick out as they only light up to signify that they are taking an action.

The music goes the same way as the art. It’s not really bad, but it also doesn’t stick with the player. This isn’t to say that the many tunes in the game aren’t appropriate, they just aren’t exactly memorable. The game’s sound effects are alright, but yet again, generic. Also, don’t expect any voice acting, which is probably a plus since indie games aren’t known for having funds for the best voice actors.

Overall, Echoes Of Aetheria really isn’t a bad game. It’s just nor overly good either. The problem is that everything just feels way too generic. Almost as if there wasn’t enough time put into developing the game. If there’s one area that does stick out as being above average, it’s the battle system. I’d seriously of liked to have seen this system in use with a game that put more time into making its characters feel alive in an interesting world with a compelling story. That would have been a game with unlimited amounts of praise from this reviewer.

Echoes Of Aetheria earns 3 GiN Gems out of 5!