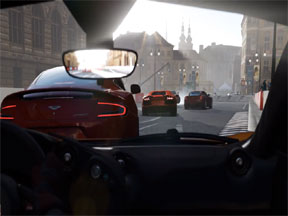 There’s something about the racing genre that holds a special place in the gaming world. There’s no story to push you forward. There’s no allocating skill points to improve your character. There’s no intricate series of button combinations to remember to execute an on-screen move. There’s just you, your car and the unadulterated thrill of being able to drive in the most visceral way possible without suffering any real-world consequences. And every new console has at least one racing game that shows off its amazing capabilities in terms of great graphics and real physics. For the Xbox One, that game is Forza 5.

With Forza 5 being touted as the most cutting-edge racing game ever produced, I could hardly wait to send the new 2013 McLaren P1 flying down the track. But that feeling quickly gave way because, as soon as the race began, I was overcome by another desire: to simply look.

With the Forza series, developer Turn 10 prides itself on creating the most true-to-life racing simulation on the market, which they’ve done in glorious fashion once more. But it’s impossible to ignore the fact that, although the series has always looked amazing, the newest iteration of the series is breathtakingly gorgeous.

The meticulous, gruelingly precise, painstaking attention to detail is staggering. Every car is perfectly replicated to match its real-life counterpart, going so far as to add the smallest sponsors’ logos on racing models. Cars shimmer brilliantly in the sunlight, and I caught myself wincing every time I hit a wall, appalled that I could be reckless enough to damage something so beautifully crafted.

The showroom-worthy car designs are matched in grandeur by the locales where you’ll be racing them. The developers at Turn 10 said they took nine months to develop each track, perfecting every minuscule detail and transposing it into the game. And after racing through the streets of Prague, around the Top Gear Test track and the other circuits, it’s clear that the development team refused to cut corners – no pun intended.

As much a work of art as this game is, pretty visuals only get you so far. But as always with Forza, Turn 10 carried their fine eye for detail over to the gameplay department too. More so than in past entries in the franchise, the cars in Forza 5 handle just like they would if you were driving them on a real track. And that means that driving some of these vehicles is quite difficult.

Forget about taking that corner at 50 mph because it’s simply not happening – that is, unless you’re deliberately trying to put yourself 20 yards off the track. There’s also a noticeable weight to each car, and it quickly becomes apparent that every vehicle has a different feel and learning curve, almost like a meta game unto itself.

Learning the ins and outs of each vehicle adds a massive amount of longevity to the game, and I easily spent hours just fine tuning my handful of cars to match my driving style. Yet the settings on my Ariel Atom were nowhere near suitable for my Dodge Viper, and so I began the process anew, determined to figure out how to get the most from each piece of machinery in my virtual garage.

For all the beauty and realistic gameplay, Forza 5 boasts one innovation that sets it apart from any other racing game, and perhaps any game at all. The newly created "Drivatar" system actually maps your driving tendencies and creates a virtual version of you, which can then go into others’ games and earn in-game credits for you to spend on new cars and updating your existing ones. As you play, the game picks up on how you handle certain elements of each track. Do you slam on the breaks when you corner, or do you fly through with reckless abandon? Do you like to drift around a certain bend, or do you take it easy? When overtaking opponents, are you inclined to smash into them or be more tactful? The game takes all of this into consideration, constantly updating your Drivatar. As you get better, your Drivatar gets better. Of course, your friends’ Drivatars, as well as complete strangers’, are also racing around your game. And don’t worry, because even if you have that one friend who likes to ram everyone off the track, Forza 5 was developed to make the Drivatars behave like relatively civil creations.

There’s a lot to love about Forza 5, but it’s not without blemish. To start with, some of the cars are blindingly expensive, and the pre-DLC selection of vehicles isn’t as vast as prior series entries. Some manufacturers only have one or two cars, while others such as Porsche are absent altogether. The track selection is also limited, in part because of the immense detail that goes into a new track’s design. Nine months to get every blade of grass in place is hugely impressive, but it also limits quantity. Old favorites such as the Nurburgring aren’t available in the game yet, so to compensate, there are multiple circuits for the tracks that are actually present.

Despite the absences, Forza 5 is still a complete racing package, and after playing the game for five minutes, it’s clear that this was very much a labor of love from Turn 10. And even with its acute attention to detail, Forza 5’s design is still easily accessible to casual racing fans. It’s possible to simply pop the game in, grab a car and go for a joyride around the track.

Put bluntly, if you’re even remotely interested in cars and you own an Xbox One, you’re doing yourself a massive injustice if you don’t own a copy of Forza 5. And right now, there’s no better way to show off what the next generation of consoles is capable of than with Forza’s stunning visuals.

Forza Motorsport 5 gets 4.5 GiN Gems for being a true work of art that drives the next gen forward.