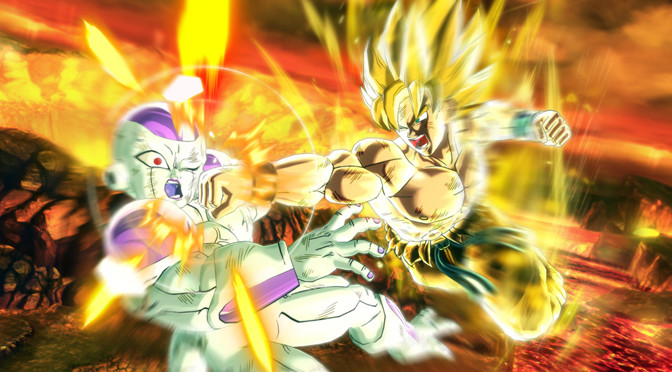 Fans of the Dragon Ball franchise know one thing very well: Dragon Ball games have their ups and their downs, with a lot of fans being burned by some of the worst iterations by various developers over the years (Dragon Ball Evolution, for example). Dragon Ball is a huge property and, as a result, it’s a very difficult to make a solid game out of it to attract new players as well as satiate longtime fans of the franchise. Dragon Ball Xenoverse very much goes to the latter end of the spectrum, amusing the largest fans of the series but seems to have a high propensity toward just confusing everyone else.

To start Dragon Ball Xenoverse, players will be treated by an anime cutscene showing various distortions in time, ending with Trunks calling upon Shenron, his universe’s version of Puff the Magic Dragon. Trunks makes a wish for help on the Dragon Balls that results in you getting to create your own playable character from various races shown throughout the Dragon Ball Z series, allowing you to make your own Majin Buu, Saiyan, Earthling, Namekian and even a character of Frieza’s race. Each race has its own positives and negatives, with the Majins having high health but low speed, Saiyans having low health but higher attack, etc…

The best part about making your own character in Dragon Ball Xenoverse is that, almost no matter what you choose, your character looks like they’ll fit right in. The game simply exudes Akira Toriyama’s art style at every turn, and while it’s not exactly the most robust create a character system in all of gaming history, the fact that everything looks like it came right off the page of the Dragon Ball manga is a huge plus. Some players will try to play seriously and make the best characters they can; others will try to be humorous and make the worst looking abomination possible. I, personally, created a very short and fat Majin Buu character, bestowing upon him the name Manbuubs. It was glorious.

The story mode is where most players will be spending their time initially, as there are story quests as well as optional parallel quests which confer excellent, additional rewards, are how your character will level up and gain new items, skills or equipment. Due to the game’s nature of requiring you to maintain a certain level for specific challenges, Dragon Ball Xenoverse should most likely be considered more like an action RPG than an average fighting game. A level 10 character will most likely demolish Raditz in the first story chapter quite easily, but no matter how good the player is that same level 10 character will take at least two fortnights to beat Kid Buu toward the end of the story because it’ll be taking very little damage per hit. Players also get to allocate attribute points at each level, allowing you to further specialize your character.

The story of Dragon Ball Xenoverse is where familiarity with the franchise is important, beyond passing references. The created character of the player will team up with Future Trunks to correct history before it collapses upon itself, as some force is skipping along the various timelines and altering events. These seem to form various kinds of, “What if” scenarios, such as Frieza jumping straight to his final form rather than tormenting Goku’s friends, preventing Goku from healing fully before their confrontation. These kind of things are neat to fans, but incomprehensible to those not well-versed in Dragon Ball. The story missions tend to be quite challenging, especially by the time you get to missions involving Cell, meaning that performing side quests to bolster the player’s level makes completion of the game much more reasonable task.

Story aside, there are tons of unlockables in Dragon Ball Xenoverse, almost overwhelming so. Practically every cosmetic item or attack from Dragon Ball characters over the years can be obtained either from a shop or by getting it as a drop from a story or side mission. Your Buu can wear Goku’s orange gi outfit plus a Super Saiyan wig and, should you be so inclined, give it every technique used by Piccolo. As players get further in the story, major Dragon Ball characters such as Krillin, Vegeta or Hercule (Mr. Satan is the greatest) can become the player character’s Master. Choosing a Master allows the player to do some friendly (or sometimes not so friendly) sparring missions as well as opportunities to learn the techniques of some of the strongest characters in the Dragon Ball universe.

Combat is a mixed bag for a lot of players- some grasp it right away once the controls are memorized, others have a very hard time throughout most of the missions. Players can string combos with a combination of the attack and heavy attack buttons, the latter of which can be charged to break through guards. Connecting with strikes will fill your Ki meter, while getting hit fills both your Ki and Stamina meters. Ki is used to fire off powerful Super attacks and devastating Ultimate attacks, all of them being attacks characters have used in the Dragon Ball manga or show. Stamina, unlike Ki, is used to fly around at high speeds in very typical Dragon Ball fashion, teleport around opponents or used for the equipped escape skill which can knock foes away from you or otherwise assist you in gaining distance.

Matches can go from quite well to terrible as a player who haphazardly expends their stamina can be stuck in a combo until enough damage has been dealt to fill at least 2-3 sections of the stamina gauge to use an escape action. Going solely on the offensive at all times is generally not the best idea, as such a thing is easily punished: Many characters have attacks they can swing behind them mid-combo, so just teleporting around opponents willy-nilly will result in you wasting stamina and still getting hit. Blocking is extremely advantageous, as teleporting costs half as much from a blocking stance, therefore it should be exercised fairly regularly even in single player mode.

Of course, being good at the combat is only one aspect of Dragon Ball Xenoverse. About halfway through development, Dimps stopped making a fighting game and began creating a kind of action RPG hybrid, that much is obvious by the need to farm for various attacks or items. Do you want the Fighting Pose K skill from the Ginyu Force so that your character gains super armor for easier melee combat? You’re going to grind for it. You want the Super Vegeta skill for your Saiyan character? You’re probably going to do the mission that has it multiple times before it drops, so grind it is. Of course, this is offset by the fact that each mission has its own hidden condition to end in a completely different way, thus giving them some replayability too.

Single player content aside, there’s actually quite a lot to do with other players… assuming you can connect to the online servers. Players can partake in online parallel quests, versus matches amongst players and more, but that’s only entertaining for as long as the server connection lasts. Even wandering around the game’s hub world, Toki Toki City, can be interrupted by server connection errors, temporarily disrupting players trying to embark on some parallel quests or similar single player action. These issues have been steadily improving over the last few weeks since release, but it can still be frustrating to get booted back to the title screen out of nowhere.

Dragon Ball Xenoverse is quite superb when it comes to its visuals. Some textures look rough around the edges, but the character models are fantastic and the action scenes during story chapters look like the anime in fluid CGI. The colors are bright and aesthetically pleasing, especially when signature flashy beam attacks fly. The animations are gorgeous, detailed down to the vivid expressions made while the characters take blows. The soundtrack is likewise very fitting, with the battle music being perfect for getting you in the mood to blow up a Ginyu; fans of the Bruce Faulconer OST for Dragon Ball Z will love this game’s audio. The sounds are perfect, with every punch and blast sounding just like it would in the Dragon Ball anime.

So the story has a lot of Dragon Ball lore in it, in almost every item or special move in the game is reference to Dragon Ball, one of the custom character voices is actually the voice actor of Nappa from TeamFourStar’s DBZ Abridged (it’s male voice eight and Destructo Disk becomes, “PIZZA TIME!”), many of the side quests have hidden conditions that may only make sense if you’re familiar with the show or anime. Basically, Dragon Ball Xenoverse is a sheer labor of love due to all of the fan service it, with a decent fighting/action RPG hybrid attached.

Dragon Ball Xenoverse is probably one of the best DB games out there for fans of the series because it compromises very little in its representation of the franchise. For those unfamiliar with Dragon Ball or who may hate anime, stay as far away from Xenoverse as possible, as it does have a fair share of flaws and without understanding the fan service there’s not a lot of enjoyment to be had. Of course, those who even mildly enjoy Dragon Ball should definitely look into Xenoverse as its multitudinous references will entertain you for hours on end.