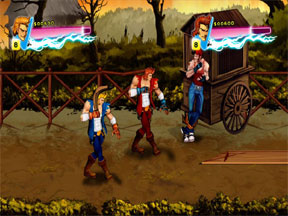 Over 25 years ago, the gaming world was introduced to an arcade beat-em-up called Double Dragon. It was a simple premise. Gang kidnaps girl, two guys go out and beat up all the gang members to rescue her. There was not much to it other than simple mindless violence, and it was a huge hit in the arcades.

It was so huge a hit that it was ported over to the Nintendo Entertainment System, and despite losing the arcade game’s biggest asset (simultaneous two player gameplay) it was very successful there as well. The same could be said for its sequel, The Revenge.

While the arcade version followed the exact same formula of it’s predecessor (although the attack buttons were changed to coordinate attacks from front and back) the NES version took on a whole new form of its own, expanding the game to nine missions and including a fleshed out storyline. It was also successful, and one of the more memorable games in the NES library.

From there the series starts to go downhill. Double Dragon 3 is a polarizing game in the series. The arcade game, as well as its Genesis counterpart, are highly forgettable, but the NES version also takes a form of its own, at the cost of insane difficulty. Not many people were able to get past the first mission.

The Super Nintendo got a Double Dragon game of its own, which turned out to be pretty good, but afterwards there were two one on one fighters released. One was based on the weak cartoon out at the time, and the other one based on the horrid live action film on the Neo Geo. In fact, the latter version even features FMV from the movie. FMV on the Neo Geo, that’s all we needed.

Since then there hasn’t been much in the way of Double Dragon, aside from an excellent remake of the arcade game on Game Boy Advance and an iOS version which was butchered by touch screen syndrome. But now, WayForward, the same developer responsible for an excellent update to the Contra series on the DS, is taking over the Double Dragon reins with their retelling of the classic game.

And what a change it is. Sure, once again Billy and Jimmy’s girlfriend Marian is kidnapped, and it’s up to them to rescue her. Billy is even getting irritated by all the times she is being captured, saying ‘Not this again!’ From there we can tell that this game always feels more like a parody of itself, and thankfully, this is an example of a good parody. Not just a parody of Double Dragon, but everything that stood out as cheesy from the 80s and early 90s.

Gameplay is the standard beat-em-up fare. The X and Y buttons are light and heavy attacks, A jumps, and B grabs. The Left Trigger dodges, and if timed right results in a ‘Gleam’ that powers up attacks, similar to ‘The Glow’ used in The Last Dragon. The Right Trigger runs, and the Right Bumper button executes a special attack that will be explained later. When playing with a ‘bro,’ as the game calls it, you can high-five him for special abilities such as sharing health or power up attacks.

Special attacks come in the form of ‘mix tapes.’ As enemies are defeated, tapes are dropped on the ground. Picking them up not only levels up your bro, but gives them unique stances (such as Absorb, which give back a small amount of health for each successful attack) or more aggressive attacks, or special attack tapes gives mores such as a fireball attack (a la Street Fighter,) a Dragon Swarm attack (a la Golden Axe,) and of course, the legendary Dragon Spin Kick. There is tons of customization for your bro, and tapes can be purchased as well as picked up. They can also be powered up at the Tapesmith with mithril obtained from defeating bosses. Trust me, powering up will be mandatory, especially to beat the game in Double Dragon difficulty.

The game takes place over 10 missions, and to an extent the setting is similar to that of Double Dragon 2 (only this time, Marian doesn’t get shot.) It starts in the same old garage from the first game (complete with the Road Blaster FX car in the garage) but then it takes a whole new setting. For those who remember DD2 on the NES, Billy and Jimmy sneak on a helicopter to the enemy hideout. But this time, they are trapped when they enter a tower run by the main villain, Skullmageddon, who I will get to later. The tower is actually a rocket that sends them into space, and even has you fighting enemies out of an airlock just like on the NES. It may look different, but it still fits the Double Dragon formula quite well.

But there are times I feel this game is not just an homage to Double Dragon fans, but also to all the great Konami button mashers of the early 90s, back when arcades were the place to go for four player madness.

The gang members start off as the standard villains from the series, and the game even introduces themselves as so. For instance, the original character of Williams (aka the weakest gang members) are referred to as ‘Cart-Wheeling Cannon Fodder.’ Lindas are referred to as the ‘Sadistic Seductress,’ and of course everyone’s favorite Abobo is now a ‘Back Breaking Bruiser,’ and that name fits quite well. He is brutal compared to his arcade counterparts, and will not fall victim to the elbow smash like before.

Then the enemies start to become more and more original. We now have female ninjas called ‘Shun,’ Aerial attackers named ‘Roxy,’ and even zombie versions of all the characters to name a few. Bosses are also in the game, including a return of the ‘Giant Tank’ from Double Dragon 2.

But the big guy himself deserves mention of his own. Willy, the machine gun toting gang leader of old, is now gone and replaced with a villain who calls himself, ‘Your Worst Nightmare,’ the sadistic Skullmageddon. Think of every corny super villain from all of your favorite cartoons and you have him. You have the cowardice of Cobra Commander, the whininess of the original James Avery Shredder from TMNT, and of course, the voice and likeness of Skeletor, and you have this masterpiece of a villain. Even after you beat him, he is the one singing the end theme, which I find to be one of the funniest end themes in any game, and yes, that even includes Portal!

Speaking of the soundtrack, it too screams out 80s. Some of the songs from the arcade game have returned, but there is a ton of new material composed by Jake Kaufman and they are all worth listening to. Even the mix tapes have their own style of music, even going as far as doing a virtual Rick Roll. Every genre is found in the mix tapes, and even they are fleshed out.

Same for the visuals. As the title says, the game is full of vibrant neon colors of the 80s, and all the characters are dressed for the setting, even for specific stages. For instance in the Airlock stage the Williams’ are also wearing space helmets (which much to my surprise do not absorb damage.) And yes, both Billy and Jimmy are sporting mullets.

They also speak in a faux valley boy accent. Anyone who remembers the live action Teenage Mutant Ninja Turtles movies will know what I’m talking about. It fits that ‘so bad its good’ quality we have seen in many remakes lately.

If there are some complaints I’d have in the game it is that the hit detection is a little spotty, another relic of the 80s, and there is no online bro-op. WayForward promises it, and I hope they follow through on it.

That is because Double Dragon Neon is something I haven’t experienced in a game recently: fun. Once again WayForward knows how to bring back a classic series to life and do it well. Skullmageddon claims in the end that ‘I’ll be back!’ I hope he keeps that promise.

Pros: The most fun I had with a beat-em up since SOR Remake. A great parody of the 80s (and to an extent the 90s.) Anything that references Crystal Pepsi in a good way earns props. Fantastic soundtrack.

Cons: Some issues with collision detection. Skullmageddon can be one cheap SOB. No Online Play, yet!