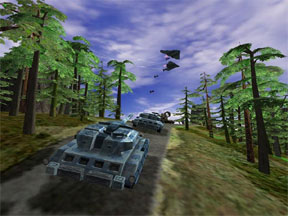 Domination is the follow-up title to the turn-based strategy game called Massive Assault. It’s nice to see a really strong turn-based game in this era of real-time strategy domination.

Don’t get me wrong, I like turn-based strategy games, but too often they degrade into just mad clicking and the person with quicker reflexes wins sometimes over the better strategic mind. That won’t happen with Domination, as the movement, defense, offense and any special abilities for each unit is defined before the war starts. So you know that a tank can move two hexes on the map (farther if it has a good road) and can plan your attack accordingly.

In a sense, it is like a giant chess game. The winner is going to be the person that is able to make the best use of his resources in maneuver skills and bringing the most firepower to bear against the correct targets.

The original Massive Assault game had all these features, but also a few flaws, especially with the single player game. The main problem was that on any given map, the computer pretty much knew exactly how to use its resources to put the maximum amount of hurt on a human player. So like trying to beat a computer chess program, unless you were a serious grand master type, solo games mostly consisted of the computer thrashing you time and time again.

Now however, the developers have added a leveling system that tweaks the opponent’s level. You can set it to terribly weak if you don’t want a real challenge and the computer will do things like forget to move a massive unit forward that could easily crush you. Or you can go to the other extreme, a mode that should be called “you have a better chance winning the lotto than this game.” Or you can set it somewhere in-between. I like to set things at a slightly below average level so that I still have to think about my moves a lot, and know I will get crushed if I make stupid mistakes, but still have a good chance at winning.

There is also a story mode now where you advance your career starting out as a private and working your way up to general in either the Free Nation Union (the good guys) or the Phantom League (the bad guys). As your career advances you fight different enemy generals, and the AI level of the computer increases as does the size of your forces.

So the gameplay at all levels is vastly improved. The one thing I would have liked to see added is the ability to pick your secret allies. The secret allies concept was pretty revolutionary when Massive Assault came out originally. You have several countries on the map who look neutral, but who are actually allied with you. At any point in the game, you can reveal your ally, which gives you a fairly large secret army. So you can use that army to invade another neutral country or to go after an opponent’s territory. Or hold it in secret reserve to give your enemy a nasty surprise if they leave something unguarded.

Your secret allies, and those of your opponent, is randomly assigned at the beginning of each battle. I would rather be able to pick my secret ally, at least in matches against the computer. Sometimes you are kind of set up to take a loss depending on how your secret allies are deployed, which is an element you have no control over.

Graphically, the game really rocks. Turn-based games are less processor intensive in general than real-time ones, so the developers knew they could really push the graphics. Now mountain streams run with water, trees sway in the wind, and of course all the units are wonderfully detailed right up to the point where they explode in a brilliant finale. When you make an important kill shot, you are treated to a theater-type death scene where you are zoomed in and can watch the shots hit in dramatic fashion. This will really get your blood flowing as you can relish watching an annoying opponent get what they deserve.

The sound for the game is a bit of a mixed bag. The vocal actors are obviously not native English speakers and the dialog comes off as stilted and a bit boring. There are no “all your bases are belong to us” type of mistakes, but the long briefings by people who are obviously talking slowing and trying to pronounce every word is a little comical. The one exception to this is the female aide who comments on each of your missions with little quips like “I will reward you personally later, if you want.” She did the voice in the first game and although delivered with a thick Russian accent, she does her lines perfectly and adds some flavor to the audio. You really want to win a battle just to hear her compliment you.

Online play is a huge strength of this title. You can play against others on the wargaming.net servers. And you can do so in a play-by-mail format where you log in, make your moves in the turn-based interface, and then wait for your opponent to do the same. This way you can play many games at the same time without taking up a huge amount of your actual time. We interviewed the Wargaming.net folks a while back. You can find that interview in the Interviews section off the main page, or you can go here http://www.gameindustry.com/interview/item.asp?id=34

The final main addition to Domination is that there are a lot more units. You now have helicopters, so the old tactic of jamming up your borders with cheap units to stop an enemy attack may not work, as they can fly over you. The new units make the strategic decisions you make even more important, and allow for more flexible battlefield actions and reactions. It does however give the computer a bit more of an advantage, since it is far easier for the AI to keep track of all its special units than it is for the average human.

Domination is a good game and great improvement over its predecessor. I am glad that Dreamcatcher decided to release Domination as a standalone game and not an add-on pack. You can buy Domination and don’t need to have the original Massive Assault title. For being an excellent turn-based title in a market packed with real-time games, it earns a respectable 4 GiN Gems.