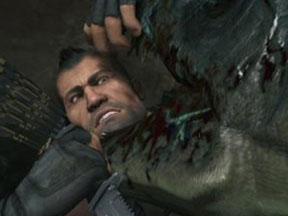 If many of you around the world heard a loud voice yelling "Oh, for the love of God! Come on and die already!" then please accept my apologies for that and the cursing that followed. You see, I was playing Turok and becoming more and more frustrated with the intensely harsh AI.

The new release from Propaganda Games has me wondering if the development team over there has an unbridled dislike of us gamers, and that perhaps they are taking out their anger by dropping us in a congested jungle filled with sharp shooting uber-soldiers.

Though Turok may not be as completely unbeatable as I make it seem, to see the final credits, one must endure several brutal battles, most of which have you cowering behind some form of cover for longs stretches of time.

Besides the difficult experience provided by Turok, there’s not really much else to comment on, which could be one of its biggest faults. While the game is not a decidedly bad title, Turok is a well-produced version of a game we’ve all played before.

The story, action, and characters are all generic, and by the time you’re halfway through, you realize that while this may be a welcome challenge for hardcore FPS gamers, it is not going above and beyond in its genre, just rehashing, which wouldn’t be so bad if all the potential for making Turok outstanding wasn’t so obvious.

In the game, you are Joseph Turok, a soldier with a sordid past who is making amends for his previous misdeeds by helping a group of soldiers track down your former mentor, Roland Kane. The soldiers have tracked Kane to a planet in the far reaches of space, but as they prepare to land, a blast brings their ship crashing down to a world where a rouge paramilitary faction is just half of your headache.

The actors cast for this game range from high-end talent such as Ron Pearlman, Timothy Olyphant, and Powers Boothe, and the look of the game is more than impressive. The controls are responsive (though aiming can sometimes get tricky) and the set designs are rich and detailed. Stealth weapons and high grass award players the opportunity to silently take out foes, and blasting the dinosaurs to bits with explosives is a ton of fun. However, for all these perks, there are some severe downfalls.

Advancing through the game is largely reliant on trial and error, which kicks you out of enjoying the game on a run-and-gun standpoint and keeps you concentrated on the order in which you should take down enemies.

Many of the checkpoints are so badly spaced out, on harder difficulties you’ll sometimes fight for 30 minutes only to be taken down by a grenade and forced to recover the same ground again and again. Granted, this approach certainly made me feel that I was fighting for my life, but it also tends to be alienating after you’ve played the same section for the fifth or sixth time.

Still, I must admit that Turok, with all its faults, kept me playing. Even with the lack of rewarding unlockables and extras, the weaponry and the challenge did have a sort of addicting appeal. And while this release may have not been the genre bending reboot of the Turok franchise, the game is certainly solid.

Next time around, I’d suggest that the developers include an easy setting for those gamers that just want to play through. Also, they should set aside a decent amount of time to add in the extras to the story mode (and beyond) that could have propelled this game from a mediocre 3.5 rating to a something closer to a 5.

As to whether or not you should pick up this game, I say rent it first. If you’re up for the challenge it presents, go out and get a copy for your library. If not, pass.