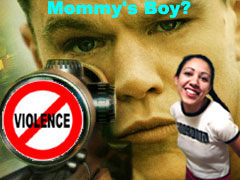 This week's bizarre award goes to Matt Damon, in news that he has refused to lend his voice and likeness to The Bourne Conspiracy game. According to reports, he's distanced himself from Sierra's movie adaptation because he dislikes violent video games. Huh!? We all say. But he's Bourne, so like, er"what!?

Now, I've got nothing against Matt Damon, in fact, I rate him very highly as an actor. Matt's one of those Hollywood stars you can pretty much rely on to make great choices and turn in a good performance every time. From meaty dramas, to a bit of comedy, right through to eye-ball popping action – Damon covers it all with aplomb.

Of course, he's now best known as Jason Bourne, in what has to be the best series action, thriller movies of recent times. If I remember rightly, Bourne Ultimatum had one of the most brutal fight scenes, complete with kick to the throat and a slow, realistic throttling of a man in a shower cubicle. Sure it's all done with shaky-hand cam, but I can't believe Damon really believes his movies are any less powerful than a game.

Damon's mother told The Boston Globe, "I am very wary of violent video games. Research shows they desensitise kids to violence, even more because they engage kids in committing violence." She seems to have found conclusive research nobody else has.

In reference to Damon's violent films she also said, "Matt and I don't share the same views about violence in adult films, but we do see eye-to-eye on the importance of protecting children. We both support regulations to stop the marketing of violence in films to children through violent toys, products and video games."

Well, at least Damon sticks to his moral code, rather than doing anything for money. I guess that's something, even if his moral code is as simplistic as "movies good, games bad."

While Matt Damon eschews violent videogames, in favour of simulating real life violence in movies, the rest of the world seems to be jumping at the chance to steal cars and kill for money.

Yup, Grand Theft Auto IV is finally here and the thing is flying off the shelves, no matter what Damon thinks. No surprises in the GTA IV-best-first-day-sales-ever stakes. However, I was surprised to learn that the 360 version is outselling the PS3 version in the UK. I mean, GTA is a PlayStation game, always has been – the brands are synonymous, much like Metal Gear and Gran Turismo.

Pre-launch there was all the blustering and hoo-ha about downloadable content, but I didn't think it would really make that much difference, especially when Sony brought out its killer bundle. The latest from ELSPA (UK trade body) is that 335,000 units were sold on Xbox 360 day one, compared to 274,000 on PS3. It looks good for Microsoft at first glance, but with no bragging press releases doing the rounds as of yet, it looks like both firms are waiting for more long term sales before they start rubbing their hands with glee.

Looking a little deeper, the 360 installed base is larger than PS3, so what's really interesting to know is how many PS3s GTA IV has helped to shift. It's looking rosy for Sony if you consider that GT5: Prologue was the previous to seller, but peaked at a mere 80,000 units on day one. As expected, Rockstar's baby has proved to be a boost for everyone concerned, knocking GTA: San Andreas off the top spot (501,000 back in 2004) with combined day one sales of a whopping 609,000.

The message is pretty clear – screw you Damon, we're killing hookers for fun whether you like it or not. That sounds bad"does anyone else think that sounds bad? Anyone?

He can always play with the Wii Fit instead.