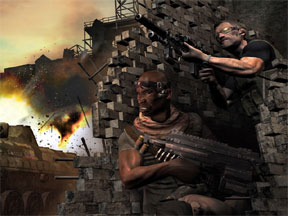 The game follows two special force mercs dispatched by the National Clandestine Service or NCS division of the CIA to handle a crisis quickly beginning to spiral out of control. The situation is risky, yet messy. So the government intends to keep their hands clean in the whole matter. That is where special ops soldiers, Lang and Graves come in.

Their job is to infiltrate deep behind enemy lines and diffuse a number of hostile situations from the inside out. Of course, however, with every mission comes significant risk. If the two get caught at any point during the mission, they’ll be carrying no identifiable tags or documents meaning that the government can and will deny their very existence.

Lang is your close-combat specialist. First look at Lang immediately reminds you of the physically imposing actor Ving Rhames, who played Tom Cruise’s hacker friend throughout the Mission Impossible movie series. Lang’s in-your-face approach to things makes him the perfect fit for intense combat situations. Graves is at the opposite end of the spectrum. Sort of a darker, laid-back, and more cold-hearted Tom Clooney type he prefers distance, seclusion, and staring down his victims through the cross-hairs of his rifle scope during his recreational past time. It’s not surprising that the two don’t have a lot in common and they waste no time in letting each other know that. Despite their differences though, the two make quite a deadly team combining a balanced attack of long and short ranged tactics.

The missions they undertake will land them in a number of distinguished locations. Not typical of you’re average conflict shooter, Denied Ops offers up a number of distinct battle fields including the frigid conditions of the Artic, the grassy plains and hillsides of Venezuela, the war ravaged cities of Africa as well as other unique places of interest including Russia, and even the middle of the Atlantic. Overall, the environmental eye candy of the game is pretty well done but it may leave hardcore gamers of this particular genre wanting for a little more as other shooters of this style have produced much more rich environmental detail.

However, what the environments may be lacking in graphical detail is made up for in the area of physics. Conflict: Denied Ops features some of the more impressive interactive environments of this particular genre of game. Each area is filled with a wealth of interactive objects and structures which can be manipulated by weapons fire at any time during battle. Players will be able to create massive explosion effects around their enemies by strategically shooting hazardous material barrels from around the surrounding area and witness events such as large building structures hit by heavy air artillery crumbling to the ground in the distance.

If you need a better vantage point to fire from, the environment may sometimes offer up some glass window panes to shoot out and get a better shot. In certain situations you can even blow holes through thin walls and safely shoot at your enemies from out of a cover position. As you battle your way through missions your game play experience will vary as you watch each battlefield begin to change and take on a life of its own.

The games biggest draw is its new and innovative co-op feature. Sort of diverting from the squad based game play of past hits within this genre of game, Denied Ops simplifies things for the player by freeing them from the hassles of having to command a sizable squad of three or more soldiers and instead narrows responsibilities down to two at their command. While that concept might be a turn off to some, others might find it refreshing to only have one other back besides their own to watch. On top of that, for possibly the first time ever in an FPS game, players can now manually switch characters on the fly at anytime during a mission giving them complete and total control of their team.

Ever been pissed because your computer squad mate got you killed by not providing you with adequate cover fire in a heavy battle situation or stupidly left their cover position to be sawed in half by cross-fire simply because you gave them the freedom to fire at will? Well you don’t have to worry so much about that kind of thing in this game simply because if you want something done right you can actually take over at anytime and do it yourself.

It’s not just about the fact that you can simultaneously switch between two special ops soldiers that makes this game a little different than the rest. There are some other cool features that round out the package as well. For example, let’s say you become severely wounded during battle. Rather than laying there waiting hopelessly to die you can call your buddy to your side at the push of a button and he’ll give you an adrenaline shot to get you up and moving again. Now, I know that we’ve seen this game play feature done in other popular titles like "Kane & Lynch" and even touched upon in the "Rainbow Six Vegas" and "G.R.A.W." series, but there is something that is more personally rewarding about watching the one and only comrade who can pull you out of the jaws of death come into the picture, take out the guy(s) that nailed you and then hit you with an adrenaline shot to spring you back into action. That’s more than just a soldier doing his duty. He’s your hero.

Overall, the control scheme of the game is very solid and user friendly. Not too sticky or too overly sensitive; it’s very easy to line up your cross hairs on an enemy and blow them away. While solid controls give Lang a more sizable advantage in close combat situations, Graves gets the biggest portion of the benefit as players don’t have to worry about the sniper scope bouncing around while zoomed in on an enemy making long ranged business a lot of fun. Being able to switch between two different, yet solid perspectives allows players to enjoy the game according their personal style of play.

I wish that I could have nothing but good things to say about a title such as this, but as time has proven over and over again, there is almost always something to gripe about. For starters, there isn’t a vast selection of weapons at all throughout the game. There are upgrades that you can acquire along the way but I find it odd that throughout most of the game these two highly skilled operatives literally stick to their guns for most of the campaign.

Also there are instances sometimes during single player exploration when you can literally lose your computer teammate. More than oft, you will have to stop and manually take control of the other character and catch up to your current location. Most of all though, while the concept of the game is pretty well executed it still feels a tad bit shallow. Being able to simultaneously switch between characters opens up a wide range of possibilities and it seems like rather than digging a little deeper and churning out an awe-inspiring and undisputedly innovative product, the dev team chose to play it safe and merely scratched the surface of perhaps a new plateau in the FPS genre.

All things said, however, Conflict: Denied Ops is a fairly solid first person shooter. It has a respectable graphics engine backed up by a ton of cool and interactive environmental physics. The storyline is pretty decent and the characters themselves, are both believable and likeable as well as fun to play. Add to that a new and innovative co-op twist to the FPS genre and you have yourself a pretty engaging experience overall.

Despite a few noticeable setbacks, Conflict: Denied Ops proves itself a worthy contender amongst its class churning out 4 out of 5 possible GiN gems.