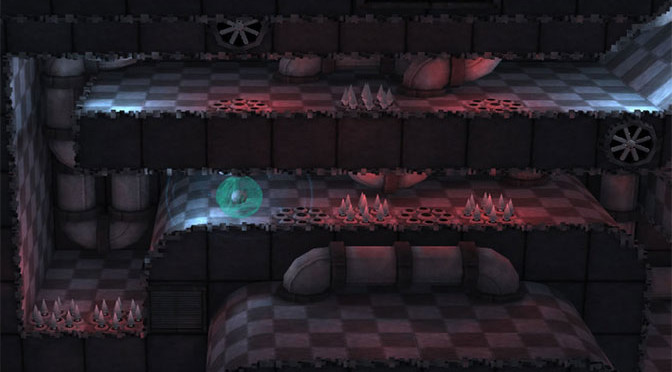 Again we have an indie game delivering a slick, engaging and intense experience. There are so many big name games that do much less and for a lot more dosh. You can tell the developers here care about their game’s integrity and are more concerned about player experience than raking in big bucks.

Gravi is a modern platform puzzler with a basic, uncomplicated storyline reminiscent of the platformers of yesteryear. Story is not at the core of this game, though. Its strength is in the intense puzzling elements and beautifully-polished gameplay.

You play as Gravi, a spherical robot with a magnetic charge which can be shot out in any direction to cling to walls and ceilings. Once attached, it pulls you across a room, or up to the ceiling, and onto it. This, plus rolling, gets you where you want to go.

Would that it were so simple!

A great proportion of the game takes you through a variety of intensely difficult rooms, with all number of insane hazards poor little Gravi has to get past to escape from the prison we first find him in. If the spikes jutting from wall and ceiling weren’t enough, the roasty-toasty flames shooting out of the remaining surfaces will do for him very nicely, thank you. That’s okay, you have your magnetic bullets, you can just leap over those darned pesky hazards. Except for one small problem.

You can’t cling for long, you can’t swing for long and you have to work those fingers very fast to re-aim and shoot before Gravi tumbles from his precarious magnetic perch, to become a puff of dust on the nearest available spike. To say this game is hard is no exaggeration. Prepare to die. Prepare to die lots. The first trophy I earned in this game was ‘Perseverance Pays’ (Die 100 times). That’s on one level. Not over the entire game. One. Level.

Clearly, if you can get your aim and timing right you can hop over seemingly impossible obstacles, but it will take you several goes, and lots of patience. Then, just when you think you’ve cracked it, good old gravity comes along and foils you again. This is not a platformer where the characters can bounce hundreds of feet on giant mushrooms, gravity in this game works…well, like real gravity – don’t underestimate its ability to impale you. It’s an ally, but it’s also a foe, ready to plunge you onto the nearest deadly trap with nary a second thought.

Talking of foes, Gravi is not alone in this labyrinth of hazardous tunnels. Anti-Gravi, his psychotic twin, is after him and he has killing on his mind. So, as well as puzzling your way through the 40 intense and frustrating levels, you have to stay ahead him. Good luck with that.

The graphics are slick, with just enough perspective to let you figure out where (and how) you have to go next. Backgrounds deliver a grim and grimy atmosphere, where rust dribbles from leaking pipes and dark and bottomless pits are lurking, just beyond view. Coupled with the plaintive techno music, the game’s overall ambience is both futuristic and gothic. An intriguing recipe.

Forty levels doesn’t seem like a lot, but this is not a game I could spend hours at a time playing, because of the sheer intensity of it. To successfully get through just one level requires a degree of perseverance and on-screen hand-eye co-ordination that would challenge a Nasa test pilot. I admit to reaching the hair-pulling stage several times. And rage-quit. Did that too. Not sure if it’s the compelling gameplay or my personal stubbornness, but I kept coming back.

In terms of replay value, there’s tons. Not only are there in-game collectables to snag on your way through a level (adding to the difficulty), there are trophies to mark your achievements. Each level can be replayed indefinitely, so for the perfectionists out there, there’s the opportunity to get a flawless round.

Gravi is an awesome modern-day platformer which will challenge your patience, intellect and sheer pig-headedness. I would have liked a shallower learning curve for the levels. Once you’ve gone through the ‘tutorial’ levels, you’re basically on your own and it gets tough very quickly. But, hey, I managed. This is not a game to chill with. You will find it frustrating, intense and addictive. Most importantly, though, despite the hair-pulling, teeth-grinding and yelling at your screen, you will also find it fun.