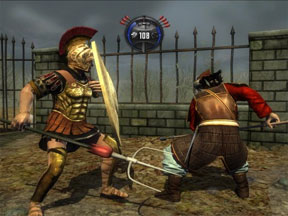 A game based of the hit show Deadliest Warrior seems like a winning formula in itself; pitting the most skilled warriors from history against one another to see who is truly the deadliest. However, either from rushed production or a lack of QA testing, Deadliest Warrior: Ancient Combat shows nothing but a forgettable fighting franchise that is more of a chore to play than a pleasure.

Deadliest Warrior: The Game lets you choose the warrior class, while Legends lets you choose the specific person. Aside from this change in character selection, the gameplay remains almost entirely the same, and sadly, is the downfall of the titles themselves.

It is clear that Pipeworks Software was going for a more realistic, visceral fighting game. It’s possible to maim your opponent and make them unable to attack, or even kill them instantly with a well placed blow, or even experience a decapitation. However, what is presented is a poorly executed combat system. You have a high attack, low attack, and mid attack. High shots give a chance of decapitation and can cause instant death. Mid and low attacks can sever limbs, which cause your opponent to be unable to wield weapons and/or cause them to bleed out. Variety is given in the fact that each warrior has a close range, mid range and long range weapon, each with its own combos and strengths and weaknesses.

Yet, the strategy that could be implemented by this method of fighting, as seen in classics like Bushido Blade, quickly degrades into spamming your projectiles and mashing random buttons due to the clumsy combat mechanics. Parrying is available, but rarely works and will cost you precious health more often than open your opponent up for counterattacks. The Special Attack that each warrior has gives an interesting instant kill movie if used on an opponent with little enough health, but since you will probably kill your opponent in a matter of seconds (possibly on accident), pulling off the technique becomes more trouble than it’s worth.

You can choose to take your chosen warrior through the arcade mode where you fight several other warriors, one after the other, or go head to head with a friend locally or online.

That seems fun at first, but replay value is nearly non-existent. You can unlock more weapons and armor if you can suffer through the shoddy combat for several rounds, but with no special ending for any characters, the rewards for playing aren’t really worth the time and effort.

The environments do nothing to aid in the struggle to find the fun in this game. Fights are devoid of any music and the battle arenas look too generic to be exciting. It looks like the designers took a basic area and said, ‘add grass and sky here,’ or ‘throw some stones and broken statues down.’

If the combat system wasn’t clumsy enough, both games glitch out more often than you will care to endure. I can’t tell you how many times my Samurai sheathed his sword into his own abdomen instead of his sheath (maybe he felt dishonored by being a part of this game), or one of my warrior’s weapons merged with his body, making it seem like he stabbed himself. Though these bugs don’t affect the gameplay, it doesn’t help immerse you the game either.

In a game where a single slash could spell death or an injury you can’t recover from, combat needs to be spot on and solid. Instead, both titles in Deadliest Warrior: Ancient Combat give you awkward, sluggish fighting and poor environments to boot.

The TV show Deadliest Warrior is known for its entertainment derived from historical and factual information combined with hard hitting, visceral simulated combat, which luckily you can enjoy if you come to own this bundle, since six amazing episodes are included.

Sadly, the games it spawned will be seen as nothing more than a cash-in on the show’s success; Deadliest Warrior is a killer in name and nothing more.