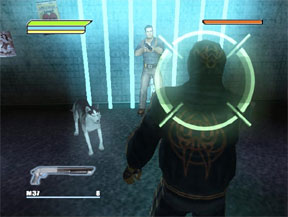 The original Dead to Rights looked promising when I played it at E3, but when the final game came out, I was frustrated with its horrid targeting system. What could have been an excellent Max Payne clone turned out to be quite disappointing.

I can easily say the same thing about the sequel. While it may have fixed the targeting system problems, the highly repetitive gameplay makes the game a chore rather than fun.Dead to Rights II takes place before the events of the original, and this time, Grant City cop Jack Slate is investigating the disappearance of a judge who is a friend of Jack’s father. The judge is aware of a huge crime syndicate in Grant City, so it’s up to Jack to locate the judge and put an end to the syndicate.

And what better way for Jack to do that than to burst from room to room and pelt the baddies full of lead? Still, Jack can also get close to baddies and disarm them in a gruesome and violent manner. Either that, or he can use them as human shields before finishing him off.

Jack’s canine buddy Shadow returns, but this time he can be used any time you see fit with just a press of a single button. That pretty much sums up the concept of the game.

DTR II is a much simpler game than the original. Originally there were mini-games that added to the storyline, such as bomb defusing (which was actually quite enjoyable) and dancing with button presses (which was not enjoyable at all). Those mini-games are nonexistent in the sequel. As a result, the game has turned into a simple, mindless, repetitive shooter.

Visually the game is average. While it runs smoothly (most of the time), it is not really much to write about, especially for a later-year XBox title.

As for the audio, that too is not much to write about. In fact, it’s pretty bad. The music is way too simplistic and monotonous, but what really gets me is the laughingly bad voice acting. While Jack’s voice acting was pretty good in the original, he must have received some acting lessons because in the prequel he is just plain awful. As a matter of fact, he almost sounds like the narrator in Tekken 3, which is sad considering that game came out almost 10 years ago!

I don’t see how difficult it could have been to get decent voice acting.

In the end, Dead to Rights II is average at best. It is a repetitive shooter with virtually no long term replay value whatsoever, and with the removal of the bomb defusing mini-games, there really isn’t much left for me to enjoy.