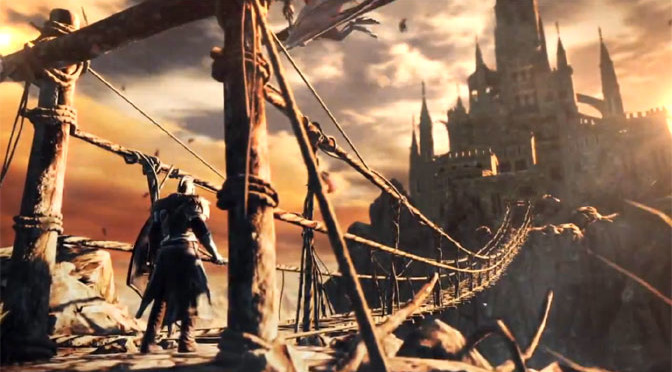 I never really understood the phrase “glutton for punishment” until I started playing the Souls series. When it first released, Demon’s Souls, the progenitor of the franchise received high praise for not bowing to the trend of games becoming easier for the purpose of accessibility. In fact, Demon’s Souls was just the opposite; it took a sadistic pride in its level of challenge, unrelenting in its punishment.

When Dark Souls picked up the torch, it continued the sadomasochistic pattern of repeatedly handing out death and doom to players who, for one reason or another, kept coming back for more. There were no detailed tutorials to be found in this desolate land, no friend to guide you along the path. Just enemies, the most basic of which could fell you in a single swipe. Still, with patience and persistence, players could make steady progress, learning as the game slowly yielded its secrets.

Having played both Demon’s Souls and Dark Souls, I knew what to expect approaching Dark Souls 2. I knew I would die – frequently. I knew progress would be slow. I even knew that I would become unbearably frustrated with the game from time to time. What I didn’t know was just how brutal the developers at From Software could be.

The first hours of Dark Souls are astonishingly difficult. Even knowing what to expect going in, there’s an entirely new learning curve to Dark Souls 2 that sets it apart from its predecessors. Not only do the weakest enemies have combination attacks that can kill players in one hit, they often attack in numbers early on, making them exponentially more lethal. It takes a keen eye, patience and a willingness to try repeatedly to get through some areas.

The game’s combat system is a delicate balance of timing attacks in between frequent dodges and blocks. The key to combat is patience, with one mistimed move potentially resulting in an untimely death. Learning enemy attack patterns is critical to surviving, and learning the different weapon animations and timing is equally important due to how the animation system works.

Once an attack starts, there’s no way to cancel it, creating a painstaking tension that requires near perfect timing from players. Some play styles do offer a greater margin for error than others. For instance, someone with a shield may see enemies stagger after a successful block, offering an opening. On the other hand, a dual-wielding character won’t be able to block at all and will instead have to rely on agile dodges and well-timed parries. Regardless of play style, the game is fairly flexible in giving players options.

Players start out by choosing one of eight different classes, with the only differences being starting gear and stats. Other than that, players are free to level up however they choose, although class choice does offer a head start towards various gameplay styles. For instance, the sorcerer starts with a staff and a higher intelligence rating than other classes, making it an ideal choice for players who want to go around slinging spells.

That doesn’t mean magic-based characters won’t use melee, though. With the weapons that deal magic damage and the ability to augment weapons with different damage types, there are multiple ways to play each character.

This has always been a strength of the Souls series. It doesn’t just encourage experimentation; it makes almost any gameplay style viable, which can be surprising given the game’s high degree of difficulty. Regardless of gameplay style, players need to be adept at dodging, blocking or, ideally, both. With any enemy able to abruptly end an adventuring session with one attack, caution always wins the day.

Of course, the basic enemies aren’t what give Dark Souls 2 its notoriety. It’s the epic, often mind-boggling boss fights that steal the show. The Souls series has always made these fights as much about the pageantry and spectacle as it has about the actual difficulty. Yes, the bosses have attacks that deal massive damage and often boast unblockable attacks, but it’s the unexpected, grandiose style in which they land their attacks that makes the fights so memorable.

Oftentimes, it even takes the sting out of defeat. If you’re going to die, it may as well be in such spectacular fashion as one of three giant metal sentinels annihilating you with a shield throw Captain America style.

The environments themselves can be just as deadly as the enemies too. My favorite failure occurred as I was cautiously approaching a giant, hammer-wielding, turtle-like creature. I slowly approached, creeping my way through the barrels strewn about my path, when, surprise! The entire screen exploded in a wash of flame. For a moment, there was nothing but orange on my television.

The positive from this was that my enemy’s health had been knocked down by about three quarters. The downside was that mine had been knocked down even more. It turns out those barrels I had been so carefully weaving through were actually full of gunpowder – and there were apparently two undead knights throwing bombs at me from the ledge above. It’s just another example of Dark Souls 2 showing that, no matter how prepared you think you are, you’re really not prepared at all.

Viscous difficulty aside, Dark Souls 2 features a strange pattern that the other two Soul games haven’t. While it initially starts in unforgiving fashion, it actually begins evening out towards the middle areas of the game. Once I became comfortable with a set gameplay style for my character, I comfortably ran through areas that would have troubled me earlier on in my adventure, and not just because my character was stronger, but because the enemies start to even out in strength too.

In addition to its infamous difficulty, the Souls series is also known for its remarkable beauty, something Dark Souls 2 only improves upon. From eerie, dank caves to majestic seaside cathedrals, there’s a feast for the eyes at every turn. The game also makes excellent use of light, incorporating torches as both a gameplay element and a visual one. Torches can do everything from altering enemy behavior, opening sealed doors and, yes, illuminating certain areas.

The audio in Dark Souls 2 is also fantastic, with ominous silence proving to be as unnerving as the thundering footsteps of giant enemies. The audio and visuals work brilliantly together, bringing the environments to life and generating a feeling that in this cold, perilous world, you really are on your own. In a strange way, it evokes the same feelings as Shadow of the Colossus did (which is the highest compliment I could pay any game.)

With a theoretically infinite new game plus option, terrific boss battles and a hauntingly gorgeous atmosphere, Dark Souls 2 makes its mark as one of the truly great RPGs to come out in recent memory. Even with its daunting difficulty, there’s something about it that draws players back for more.