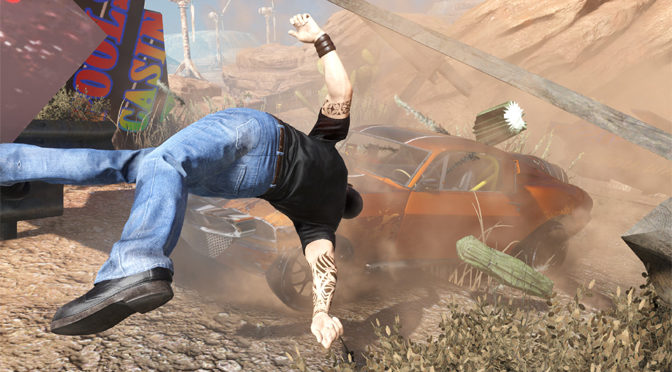 Flatout 4: Total Insanity hits the track as the fourth installment in the series and it brings all the bells and whistles of its predecessors, give or take a few. A series well known for its uniquely styled racing mechanics, Flatout ignores all the rules and physics of the road and let’s drivers put the pedal to the floor fueling a fun, addictive and unhinged driving experience.

Now Flatout 4: Total Insanity is not going to utterly blow your mind with its visual aesthetics, but the results seem to work for the genre. Shipping with 20 tracks and 27 customizable cars, the presentation is decently compromised of a varied number of winding dirt, backroad and circuit courses filled with lots of interactive roadside obstacles and a fair selection of cars ranging from old school clunkers to modern day muscle machines. 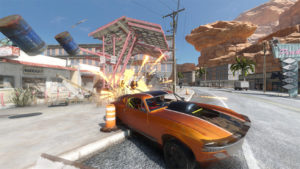 After you’ve put some time behind the wheel, however, it will start to feel like every other track is a slight rehash of another and you can’t help but notice the lack of depth in terms of total car customization. The good news is that what Total Insanity might be lacking in eye candy it more than makes up for in gameplay.

At the core Flatout 4: Total Insanity is all about high speed racing, thrilling stunts, dramatic collisions, and tons of demolition which is all nailed very well here.

Career is the featured mode of the game. Here you goal is to race in the Flatout Championship. You’ll have to battle and race your way through three major circuits: Derby, Classic, and All-Star. You will start out with a small amount of cash and your choice of an old beat up ‘57 Chevy or rundown Volkswagen Beetle. 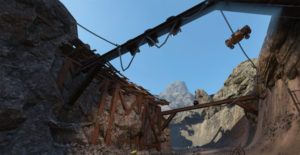 A far cry from the high life, derby cars are not the most powerful cars you’ll get to drive but they are ideal for training and will get you across the finish line first with a little skill. Once you start winning and earning money the race game changes as a better selection of cars, upgrades and high stakes races will become available.

[amazon asin=B01MZ0FW3T&text=Start your engine with a copy of Flatout 4: Total Insanity from Amazon!]

You’re gonna need to budget your money along the way as certain races will require certain types of cars. You’ll need a 30,000 budget to race with the sports cars of the Classic Circuit and nearly 60-grand to race against the most powerful cars in the game on the All-Star Circuit. 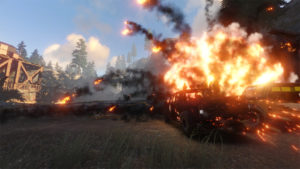 Building a career is cool but if you just want to jump straight into some wild action then look no further than “Flatout” mode which encompasses all your mayhem needs. This mode throws a series of unlockable challenges at you including “Stunts” where you actually use highspeed and momentum to eject the driver of your car essentially turning him into a wrecking ball or shot-put object, “Carnage” where the sole objective is to wreck and demolish everything on the road and around you while finishing first, “Beat the Bomb” a brutal time challenge race where you have literally seconds to cross the checkpoint or die an explosive death, and “Keep the Flag” a deadly game of arena car tag to take ownership of the prized “flag light.”

Some other intense game modes players will have at their disposal will include “Time Trial,” a single lap race to lay down your best time as well as “Assault” an all-new weaponized racing mode where anything goes when it comes to crossing the finish line first. 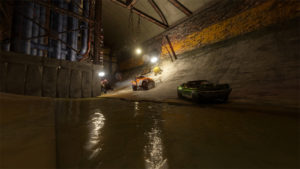 Aside from a few AI issues, the single player experience of the game is solid with plenty of reasons to lay down some tread. Surprisingly, it’s the multiplayer experience that leaves some room for the wanting. While you can experience nearly all the competitive modes of Flatout online having the opportunity to play the mode you want can be frustrating due to an excess of hit or miss of lobby activity. Unless you have a network of friends who have the game there is not a ton of fun to be had here. It also would have been helpful to have some sort of lobby tracker for players to see how many are online and what modes are trending. 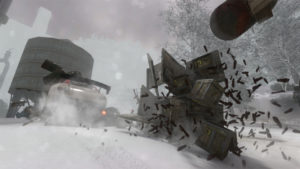 In spite of a lackluster multiplayer experience, Flatout 4: Total Insanity is still quite a blast to play and there is plenty of gameplay hours to be had amongst all the modes combined. If you’re a fan of the series or new comer looking for a new take on racing, I don’t see any justifiable reason to not add this one to your gaming library. This one gears up to a worthy 4 out of 5 GiN gems.