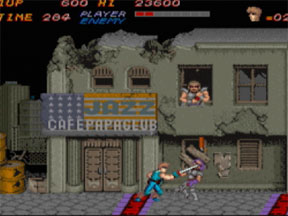 Compilations as far as I’m concerned are a mixed bag. Since most of the classic games I play are done by way of emulation, I have a good idea of how a classic game should run, and if anything deviates from the norm, I will easily point it out.

In addition, the control and menu interfaces can either make or break a compilation.

Look at Intelivision Lives. There is no way that a PS2 or Xbox controller can easily emulate an Intelivision controller, and that compilation suffered as a result.

On the other hand, if you have a compilation that takes advantage of the new system’s hardware, such as Activision’s Anthology or Midway’s Arcade Treasures series, then not only does it make playing the classics fun again, the extras provide extra incentive to come back. Lucky for Capcom, their Classics Collection follows the mold left by Activision and Midway.

As mentioned above, almost all of the titles listed are the actual arcade games. Only Super Ghouls ‘N Ghosts, is based off a console title (from the SNES version), but I wish I could say the same thing about Bionic Commando. Compared to the amazing NES version, the arcade version included pales by comparison.

While most of the titles available are definitely "A" quality, there are some that seem to be added in just for nostalgia value.

Take Vulgus for instance. For a shooter, the game is barebones, but if you read the game notes, it is listed as the first game ever to be made by Capcom. In addition, many people will find that some of their favorite Capcom releases (Strider for instance) are MIA. Hopefully there will be a second collection that will include all the missing titles.

I am happy to say that Digital Eclipse did an amazing job converting these classics. There are some minor deviations from the original, but not many to ruin the games.

Even better, the control was designed perfectly for modern systems. Forgotten Worlds was known for having a rotating joystick to allow 360 degrees of shooting. How is it solved on the PS2 or Xbox? Simple, use the right analog stick to aim, similar to Robotron or Smash TV. Genius!

While the compilation as a whole cannot be rated on graphics or audio capability, due to the variances of each of the games, I can say that the interface is easy to get into.

Anyone who has played an Ultracade arcade machine will feel right at home. On the menu screen is a video clip of the selected game in action, and from there you can select to start the game, change options, look at extras, and get information about each game. The information available provided a few surprises. I never even knew that Mercs was the true sequel to Commando!

One of the options available on select games is the ability to remix the sound. What this means is that the audio quality can be cleaned up, and the music will be an updated version.

The biggest surprise came with Street Fighter II: Hyper Fighting, when I found out that the remixed soundtrack came straight from the 3DO version 10 years ago! That’s right, the soundtrack that a reviewer from Gamefan praised in one review, then repeatedly bashed in subsequent commentaries, is back and better than ever.

Lack of a Live Aware scoreboard, or any online capabilities in general, really hurts, but not enough to say that this compilation does not rock. I can’t wait to see what Volume 2 will consist of.

Just don’t reduce the number of titles to a paltry eight like Midway did with their last compilation.